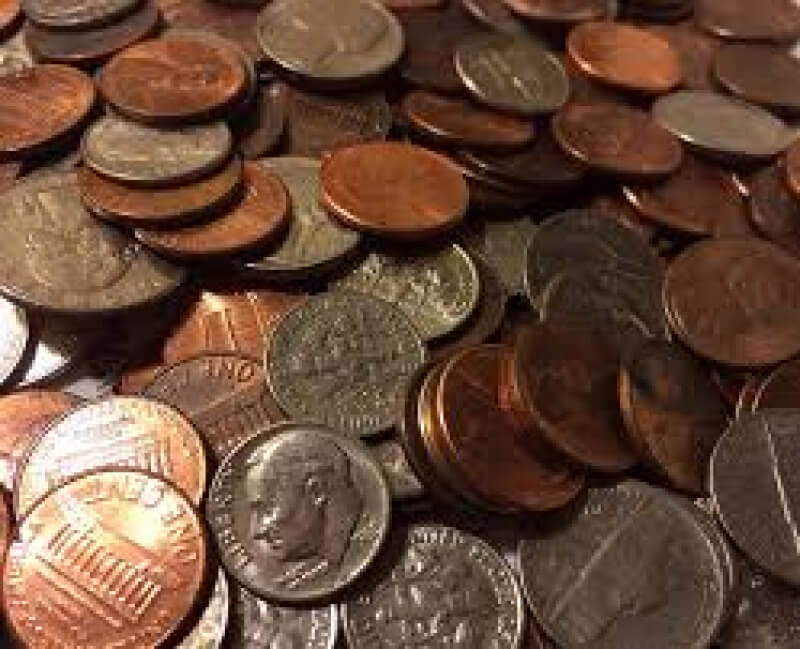 As I am going to the bank today, this time with my siblings, I felt like I should make another coins in your pocket blog post. I will pick up another penny box today, as well as my siblings, they will probably get nickel or quarter rolls,  none of us have it in their budgets yet to get a box besides pennies. I hope that we all will have some good finds in our rolls. I will always continue to search for errors, hoping one day to find an error worth sending in to be graded. Before I write this blog, I would like to say thank you to everyone on this website. You all have influenced me more than you know. I truly feel that this website has increased my ability on so many things. To name a few, writing skills. My grade in writing class has moved from an B+/A- to a solid A, once I find a notable coin in a hunt, I am going to write to CONECA, and see if they will publish it. So, without further ado, Coins in Your Pocket - Part 2! This time featuring nickels and dimes!
#1 - Silver War Nickels:  Yes, they have silver in them. Not the traditional 90% silver, but 30%, which is still about the silver value of a 90% dime. Made from 1942-1945, these were made during the war to conserve metals like copper that were being used in the nickels. I didn't know about these until about a two years ago. My brother had a 1943 nickel, he asked if it was worth anything, and being the very knowledgeable collector that I was, said, "No, its  just a Jefferson nickel, you should just spend it." Later, when he was accumulating a sizeable hoard of these coins, he said, "Hey, remember that one 1943 nickel I had, that had silver in it." Moral of the story is to always research your coins before you spend them! I have only found one of these in my searching efforts, but they still can be found. They will sell for about $1 each, for their silver value. If a piece is in better condition then it might command more.
#2 - Westward Journey Nickels: I feel that, in comparison to the Lincoln Bicentennial pennies, these are widely overlooked. I can almost always find one in roll hunts of over 2 or 3 rolls. They were made to commemorate the 200th anniversary of Lewis and Clark journeying to the Pacific Ocean, which happened from 1804 and 1806. Like Lincoln Bicentennials, they have 4 different reveres designs. The first is of the Peace Medal, which is 2 people shaking hands. The second is a keelboat, which Lewis and Clark might have used when crossing rivers and in the Pacific. The third is a bison, which is often confused with Buffalo Nickels. The fourth is a view of the Pacific Ocean with the words, Ocean in View, Oh the Joy! Which were words that they wrote in their journals when they saw the Pacific Ocean for the first time. Prices are 20 cents in a coin shop, and more in better grades. There is technically a 5th reverse, which is the newly designed Monticello on the reverse in 2006, but is not widely recognized, because that design was used after 2006.

#3 - 1982 No Mint Mark Dimes: In 1982, dimes had switched from using dies that contained no mint mark for Philadelphia, to a P mint mark for Philadelphia. They accidentally used a die that had no mint mark on it. This is a variety that is cherry picked from change, but can still be found. Like the 1922 D, there are 2 reveres, a strong reverse, and a weak reverse. The strong reverse commands more money than the weak reverse. Raw, or ungreased examples will be less, while graded examples  will usually sell for more. They will cost anywhere from $50 to $300 dollars, depending on what grade they are and what type of reverse they have. Examples of how prices vary from the strong and weak reverse are shown in the Red Book. They list it as $65 for the weak reverse, and $200 for the strong reverse. Both coins are in grades of MS(65) A really neat variety, and a cheaper example of a no mint marked coin!
Thanks for reading this. More blogs like this coming soon!

I'm also always looking out for errors too. thanks for telling me about the 1983 dime with no mintmark. you learn something every day

Glad we are, in any way, helping you. I enjoy reading your cent blogs. I too am a hunter of these. I also get a box form my bank.I find it very relaxing. It is amazing to me all the different degrees of strike one finds. Happy Hunting to you are your siblings..

write, write, then write some more; the key to improving writing skills(generally speaking). I'm sure if you looked at anybody's first blog here and compared it with one of their more current, you would see improvement. This is a spectacular site for learning, whether new to the hobby, or on the other end of the spectrum, a highly experienced numismatist. From dealer to the regular hobbyist, everyone has something to contribute, and something to learn. To paraphrase the great user, Mike B, "If you think you know everything, try stamps". I greatly enjoy reading your blogs on your findings, they always express your numismatic zeal, and the joy of the hunt. Thanks

Thanks J/A, we all learn from each other and that is the magic of this site. That also applies at club meetings and shows. Best of luck on your Cent search. There are 69S DDOs still out there in circulation, I have no doubt.

I still like cent rolling. Cents are one of my favorite coins. Thanks for The blog and good luck.