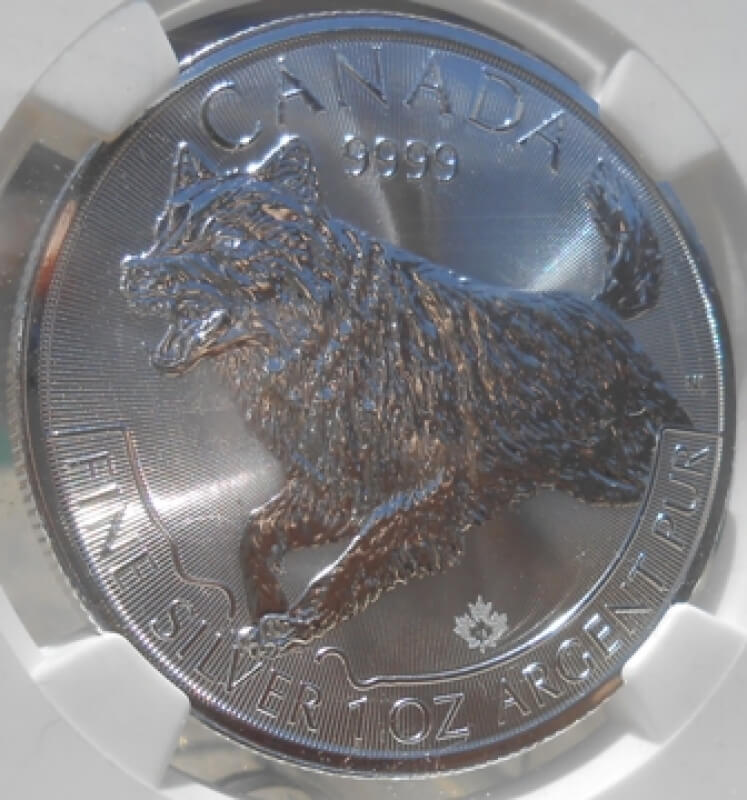 01 Jul 2018
I'd like to share a new piece that I've added to my collection recently.   It's part of the Royal Canadian Mint "Predator Series"  2018 Canada S  $5 Wolf.   Early Release. Graded by NGC as a MS 69.    This coin is the third release in this series. The first being the 2016 Cougar and the second 2017 Lynx.   The Wolf is 1 oz. of fine Silver and has a low mintage of 300,000.   It is a sovereign coin backed by the Canadian Government.   The Obverse shows Susanna Blunt's design of Her Majesty Queen Elizabeth ll and the face value of $5 dollars.  The Reverse is an engraved depiction of a wolf in pursuit of its prey.  Designed by artist Nathalie Legace.  I really liked the fine details of the wolf...coarse fur, sharp canines and running at full speed!
The wolf is a fearless hunter that relies on high intelligence, adaptability and great hunting skill, especially in a pack.  They have lived in all types of terrain in the northern hemisphere except for the desert...which is where I live.   Around 50,000 wolves make Canada their home, the second largest population in the world after the former Soviet Union.   They are very social and gather in packs of up to 20 members.   Looking at this beautiful coin I can just imagine a pack of wolves running through the snow, working together as they pursue tonight's meal.   Thank you for reading my blog!  Comments are always welcome.

I love animals especially the wolf so this coin is pretty cool. I am collecting coins with animals on them so I am definitely going to keep my eye out for a Canadian Wolf. Thanks for sharing! ^-^

This is 1 beautiful series. I like the polar bear myself.

Beautiful coin. The Canadian mint puts out a wonderful variety of coins. Something for everyone.

Great Coin . They do a good job. I like animals on coins but only certain ones. Enjoy it .mike

The Predator Series a nice looking series! Nice coin, another great addition to your collection.

What a beautiful coin. Very informative blog. I am a real favorite of many Of Canada's, Ill call them bullion coins, even though they are government back with a denomination. That way everyone knows what I am talking about. I hope! Thanks for this fantastic coin. Are you going to try for the earlier coins in the series??

Thanks Longstrider! Glad you enjoyed the blog. For me what drew my attention to this coin was that it is a wolf. One of my favorite animals! The other two in the series are in the cat family. So we'll see, not that into cats.

That wolf jumps right out at you! The Canadian mint has such a variety of coins and yours is very nice.

Cool that Canada has their bullion coins at $5, and America has it as just 1$.

I am saving up to get the Lynx and the Cougar part of this series. I love cats, and silver is at an all year low. I keep hoping they get lower so I can get them for cheap.