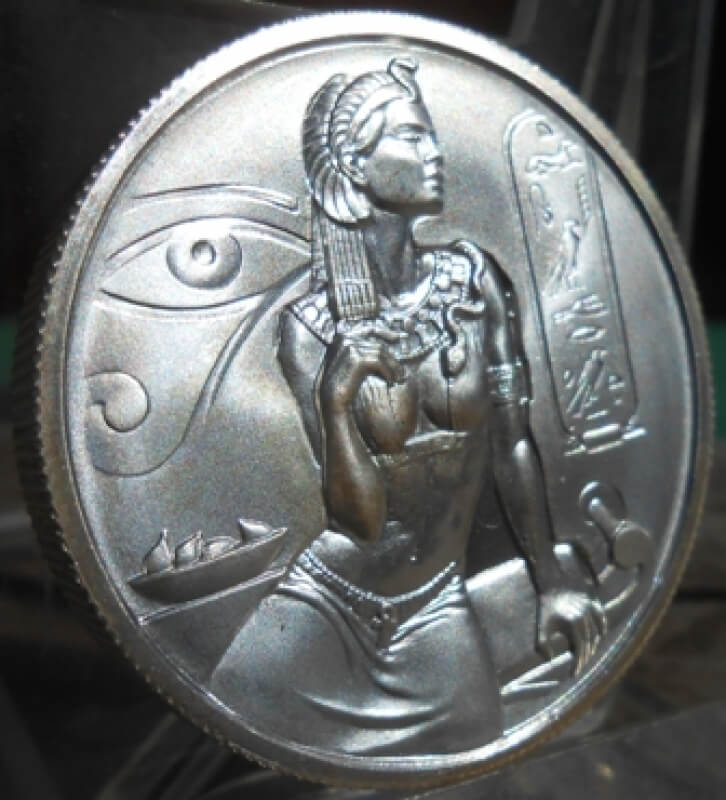 05 Dec 2017
Now who doesn't like Egyptian history and mythology...   Gods, magic, pyramids, mummies, exotic women***    I love this stuff...all the way back to when "Abbott and Costello Met the Mummy"...  haha      With that said I had to have this collection!  The first in the series is "Cleopatra"  which is a 2 oz. High Relief Silver Round.  The obverse of Cleopatra is sculpted in the style of ancient Egyptian hieroglyphic carvings. Rising from the surface of the round, Cleopatra comes to life through subtle movement, indicated by the space intentionally left void behind her neck. Because her face is not incused, she appears to be moving forward.  To her right is the cartouche of Cleopatra,  a vertical oval featuring a horizontal line at the bottom, signifying that the inner text was a name of royal lineage.   To the left of Cleopatra sits the Eye of Horus, sculpted by Heidi Wastweet.  Below the Eye of Horus sits a bowl of figs, which Cleopatra's servants used to smuggle in a poisonous snake called an asp, which slithers down her shoulder and neck. It is widely believed that Cleopatra committed suicide through the lethal bite of an asp. The reverse features the Goddess Isis, of whom Cleopatra was said to be the reincarnation.  The banner of the scarab beetle rests below. The scarab beetle was a symbol of great power in ancient Egyptian mythology, responsible for pushing the sun into the sky at dawn.The Hieroglyphics on the field were taken from ancient Egyptian papyri, featuring writings about Cleopatra.  The pattern to the left and right of the weight-and-purity hallmark can be found on the outer wall of the Temple of Horus. They represent a bed of lotus reeds blooming in the Nile.   This is a beautiful design and the weight of it in your hand really feels like you are holding a hunk of silver!   Thanks for your comments!

Cool coin, Kepi - thanks for sharing! But man, some artistic liberties sure were taken to make this coin. Cleopatra VII was not quite the "beauty queen" we know, as portrayed by Elizabeth Taylor on the silver screen. There's no questioning just how powerful (and power mad!) she was, but the aesthetic was lacking a bit, as evidenced by the realistic coinage made by the Romans around that period. -Sam Gelberd, ANA Numismatic Educator.

Beautiful coin and great history lesson. As you say, who doesn't enjoy Egyptian history?? Thanks Kepi!

Are these silver rounds or coins? Where are they minted? I've not seen these before.

I think it is very well designed coin. Thanks for sharing.

I like the two oz coins . Some are very nice like this one. I enjoyed it so much I bought the the other one . Won't say which one in case there's a follow up. Great history on such a powerful Woman. At the time it was men who ruled the different parts of the world. She was very smart and as history goes terrific. I love the barge she had huge. Thanks for an interesting blog on an interesting and powerful Woman. Mike.