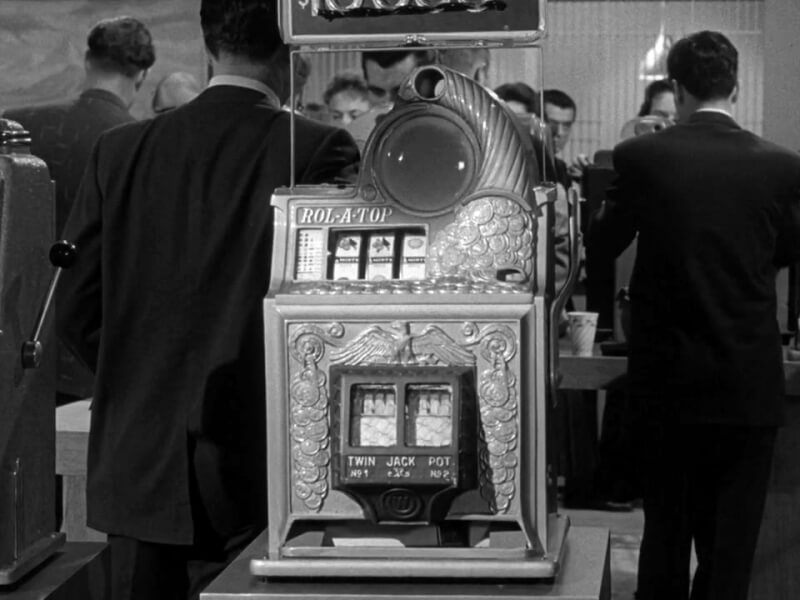 31 Dec 2017
It's New Years Eve today and traditionally, also "The Twilight Zone" marathon as well!   I grew up with these old sci-fi classics and must admit I love watching them again once a year.   So I found Season #1,  Episode #17 dated from 1960 really interesting and fun???   Titled "The Fever"...   The story line is Flora and Franklin Gibbs head for Las Vegas for a two night all expenses paid vacation that Flora won in a contest.  Franklin is not impressed with the whole idea, especially the casinos in which everyone just throws their money away in the slot machines! Poor fools he calls them! Even poor Flora while putting a nickel in a slot gets read the riot act by Franklin.  Heading up to their room, a drunken gambler gives Franklin a dollar ( A SILVER DOLLAR!)  and insist's that he play the slot machine. Franklin wins and thus begins his decent into Twilight Zone Madness!!!  After a 24 hour binge on the slot machine and loosing all his money, in his crazed state he jumps out of the hotel room window ending his life and the Las Vegas vacation...         Cool huh!    Now to get to the point of my blog. There were real SILVER DOLLARS everywhere...Peace Dollars and Morgans Dollars...   in the slots, on the card tables, being used just as if it was normal!    But wait...it used to be normal!

It's amazing what you pick up that a "non-coin" person wouldn't! Very cool.

Kepi, thank you so much for posting this! I love the Twilight Zone, and I remember watching this episode with extra numismatic enthusiasm.

cool, I didn't know that.

that is interesting. i heard that they were used as poker chips back in the day

ah Kepi, that is an awesome break down of the episode & the fact that there was coinage , .... hoo wee - just a little extra awesome there - thanks ! Happy New Year !

Your blog brings back some memories. I used to really enjoy watching these. Don't remember this episode but they were all good.

I remember that episode. The slot machine called out Franklin's name whenever he tried to sleep.

Great shows I intend to watch all the martinis I can. I remember this show they were all great. Thanks for bringing them up!Mike.

That's marathons not martinis. And I did. Sorry for my spelling.

Real silver dollars! And many were used as money. Look at all the worn Morgans, Peace $1.