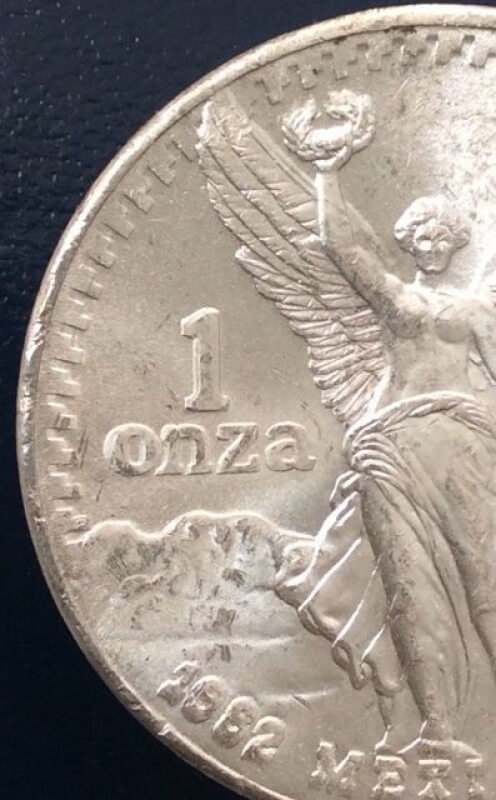 So last week I was looking around eBay, something I seldom do, and saw something new to me. A 1982 one ounce silver Mexican Libertad error. I’ve never seen a Libertad error. After some negotiations I am the proud new owner if it. This coin is raw, also something I would never buy from eBay. I am pleased to say it arrived as shown.

First off, after some research on Libertad errors, I’ve found that most like errors that have been graded are called DDO. Now this is dead wrong and NGC and PCGS should be ashamed of themselves. The doubling is on the reverse of this coin, the side with Winged Liberty. The obverse is the side with all the old Coat of Arms from Mexico.

As you can see in my photos, I hope, I have major doubling on the “1 ONZA” of the coin. There is also some doubling on the “PLATA PURA”. Although not super rare they are not common. 1982 was the first year of the Libertad series. It is still being produced today. It’s a bullion type coin similar to our Silver American eagle.

Here are the specs of this coin as several changes have been made throughout the production of this series. This is the 36 mm size. It was made from 1982-1995. It’s 31.1 g of .999 silver. It has a smooth lettered edge. It features the National Coat of Arms of Mexico on the OBVERSE. The reverse features the Winged Liberty statue. It is a KM #494.1.

I’m not going to go into any more details on Libertads. I invite those interested to research it as it’s very rich in history. Here is a list of other errors I know of and I'm looking for:

1982 Triple Die Reverse, brand new variety, i have the only one so far.

I hope you enjoyed this blog and learned something. Please feel free to comment. Thanks.

Great find, and sometimes you can find something on eBay, other times you get cheated.

Having a sharp eye pays off! You got a good buy

Congratulations, wonderful coin and post. Nice job on the pictures too, can really see the doubling. Thanks for the information, too, inspires me to look into this series. Jim

You did a great job with the photos. Nice find.

That's a beauty! It seems only right that you should be a collector of "Vam" Libertad's since you are our "Official Vam Man" here on the ANA Blog site. Great job on finding this one and adding it to your collection! Love the photo's too!

My mistake I understood that the side with the mint mark was the obverse. I get confused with those coins. You got a beauty that's great. When you send it in teach them what side is the obverse and reverse. There is a space on the form or write a note. Great blog. I enjoyed it very much. Once I picked up D D on eBay but the seller didn't know it. It we a quarter so I did not send it in. I felt bad about. I still have it raw. Thanks for the wonderful picture also. From the oldest mint in the western hemisphere. Mike.

It's like the side with Her Royal Majesty the Queen on it is always the obverse.