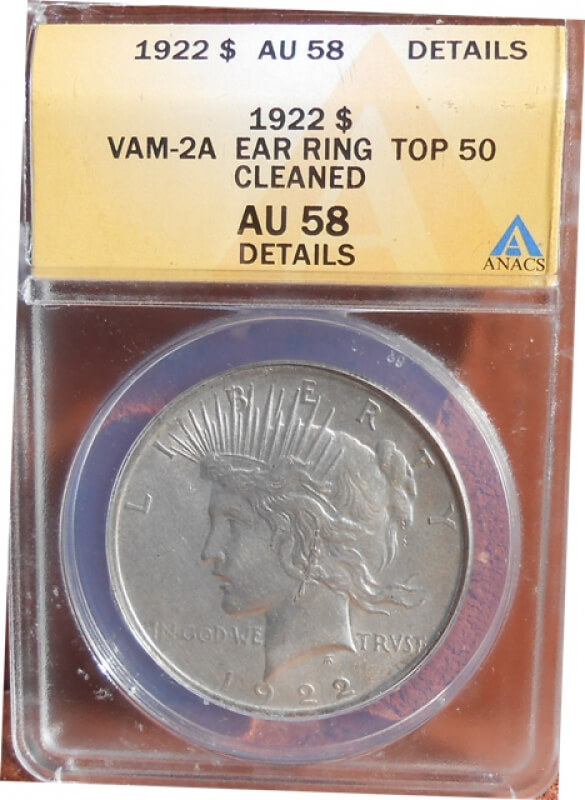 á áThe other day I gave up waiting and pulled the trigger on one of the ÔÇťCrown JewelsÔÇŁ to the Top 50 Peace Dollar VAMs. This would be the 1922-P VAM 2A. Often referred to as the Ear Ring variety. It gets its name from the shape and location of a major obverse die break. As you can see in the photos, it is located near LibertyÔÇÖs ear and is dangling down her neck.

áááSince this is the largest die break in the Peace Dollar series of coins it is always in high demand. This results in higher than average prices. These premiums are so high that I chose to buy this ANACS Cleaned AU 58 grade coin. Even then it was a bit pricey, at least to me. Now I have no problem buying a ÔÇťproblemÔÇŁ coin if the situation warrants it and the coin still looks nice. I feel that is the case here. To be honest, a non-details coin in this grade would wipe out my coin budget for some time.

áááMy specimen still has a nice luster that leads me to think it was cleaned quite a while ago. Back then, cleaning was considered an appropriate method to make a blast white, silver, coin that was all the rage. Now, as we know, this is not the case. A cleaning can ruin the collectability of any coin.

áááNow onto the variety itself. The 1922-P VAM 2A was first discovered by Allen Ziegler in March 1966. As with most VAMs there is an evident progression in the die break as time and die usage goes on. The EDS or early die states, exhibit a string of four connected lumps of raised metal, silver, on the coins surface. Later die states, LDS, show the increase in the size of the break. This leads to the eventual largest die break in the series. Normally the dies would continue to be used till they came apart, as was common in 1922 and 1923. This does not seem to be the case here since there are no other die cracks.

áááI hope you enjoyed this short blog. Please check out the photos below and feel free to comment. Thank you all!

Good blog! I hope to see more blogs on the VAM's here and in CONECA magazine. I also visited the VAM world site, man they have a lot of information! Its interesting because I'm used to 2009 DDR's and with those coins being so small, the huge dollars seem easy to find the VAM on.

"I'm loving this earring thing! This is my favorite VAM of all your Peace Dollar VAM's! No wonder this coin is pricey and in high demand. I too have been known to buy details graded coins when the full grade coins are just too expensive.

Very nice indeed. I'm still looking for both of the key dates (1928 and 1934s) in AU58-MS based on eye appeal comparative to the others in this series. For that, I must attest to the difficulty in acquiring that which you've found. Congratulations!

Saving the pricey ones for last.. Do you have a 1921 high relief? They are beautiful. I wish you luck. Thanks for the comments..

I actually never heard of this coin before. Of course, I don't really know any VAMs. Congratulations on a very nice coin in your collection!

Hands down the coolest looking VAM out there! Miss Liberty looks good "all dressed up"!

Very nice. I enjoy your passion for VAM's. I really like that this one is so easy to see.

Great coin. Would love to own one myself. Will have to look around for Peace Dollar VAM's now. Every time I read a blog I get the urge to go look. Thanks for sharing.

Great lookin' Vam Longstrider! I wouldn't let "Cleaned" sway me whether or not to buy a coin...especially if its one you really want. Miss Liberty has great taste in earrings! Girls like those long dangling designs ; )

Great VAM Longstrider, I am like you, if the need is there and the details are not too daunting, I am in. Thanks for sharing your wonderful earringed Lady.

You are your way. Nice pick up. Almost there.Just how many Varieties does the 1922 Dollor have.

Too many for me to count right now. More come in all the time. There is a supplement published each year with new discoveries. It's all on VAMWorld 2.0.

Thanks. The coin actually has nice luster but my photos don't show it. In hand it's a beauty.