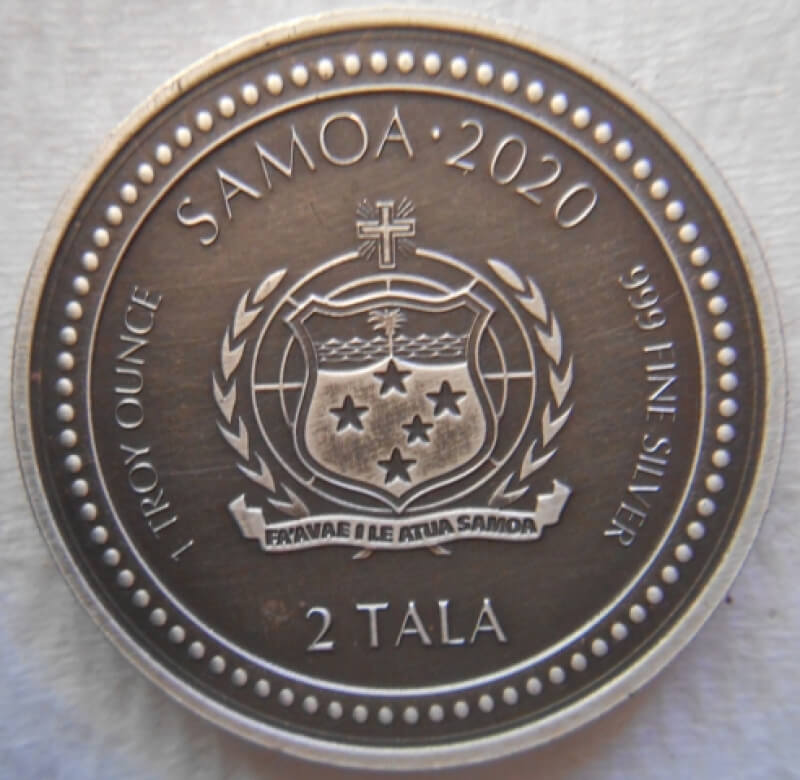 I picked up an interesting coin the other day I want to share here. It is a 2020 Samoa Silver 2 Tala. It is a one ounce of 99.999 silver, non-circulating but legal tender coin. It caught my eye for a few reasons. First it has an antique silver finish. I always wanted to see one of these in my hand. Next and most important it features a dragon-like reptile on it. I'm a dragon freak.

The coin is featured as the first in the new "Sepants of Milan" series being sold by Samoa. It was minted by the famous Scottsdale Mint here in the USA. I have no idea how they decided to make Milan coins, other than they are cool. The reverse features a depiction of The serpent of Milan. This is the primary image on the medieval coat of arms of the House of Visconti. The serpent is seen eating a child and is called a "Biscione".

The Visconti family line began during the rise of power in Milan, Italy during the 11th century, until 1447. The design also shows a wreath of olive leaves encircling the rim. This image is still in use as the emblem of Alfa Romeo cars.

The obverse has the Samoa national crest with the date above, weight on the left, fineness on the right, and value below. The legend "FA'AVE LE ATUA SAMOA" which translates as SAMOA WAS FOUNDED BY GOD. Two Tala is currently worth about $0.75 USD. The coin weighs 31.1 grams, is 39 mm in diameter and 3.2 mm thick. It also has a reeded edge.  It's a beautiful coin that has a nice heft to it in hand. I really like this antique finish. It is nicer than I imagined it would be. Since the coin is backed by a nation and has a monetary value it is considered a coin and not simply bullion.

I hope you enjoy this blog and the coin pictured below. Please feel free to comment. Thanks for looking.

That's a nice looking coin. I may have to look for one for myself.

Beautiful coin! I like the antique finish. Interesting history lesson too. Perfect coin for the Dragon lover!

Interesting, nice addition to your collection

That's a beauty Longstrider. If they do a Fiat one, I will have to get that. Gonna keep an eye on this series.

Very interesting coin! I really like the reptile design on it.

Beautiful Coin. I might have to purchase one myself. I do like antique finish on collector coins. I think they look really nice. If the mintage is low, I might buy one myself. Looking forward to seeing the whole series.

Mintage of only 2,000. I should have included that.

Interesting to see coins for a country half way around the world still has ties back in Europe.

Very nice blog. I have never here or seen those coins. Then again the world is big place. I enjoyed the history and the coins. . Don't get me wrong but I think I would go for the car!! Great blog the history and research were great. Thanks for your work.P.S. When I was growing up stood for Fix it again tony!!

I've seen that imagery before, but didn't understand the background history like my articles on the Liberty Pole and Liberty Cap. Thanks for educating me, That always makes my day.! Its a very attractive coin too.