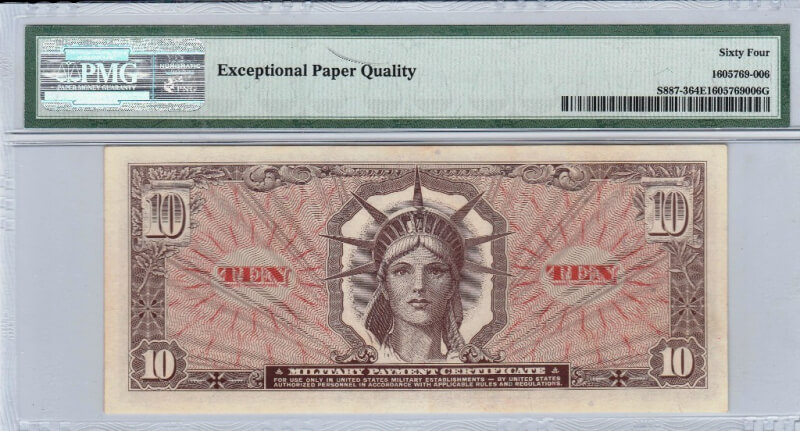 † †The latest addition to my growing MPC collection was a birthday present from my wife, thanks babe. In the photos below you can view my new Series 641, $10 Third Printing MPC. It was graded by PMG as a 64 Choice Uncirculated EPQ or Exceptional Paper Quality. It has a Schwan number of S887-3. The serial number is kind of cool as well. The Plate Position is 24.

† †All the notes in the series have the prefix and suffix letters in the serial numbers of J-J or J. If the note is a replacement, it does not have a suffix letter. This is similar to our Star notes in regular issue currency. The Schwan number is similar to Friedberg numbers on regular issue notes. They list the different varieties of MPC‚Äôs. This particular note is a 887/3. That means it falls within the serial numbers of the 887 variety of Series 641 $10 bills. It is also a Third Printing. This number falls within all serial numbers between J08,400,001J and J20,400,000J. There is a total population of 12,000,000 of this variety or Schwan Number.

†† This ten dollar note is red, brown, and light blue in color. The front pictures an allegorical woman. The back has the head of the Statue of Liberty. There is no security thread and no watermark. It‚Äôs size is 156 x 66 mm.. There have been no replacement notes reported for this variety.

†† I hope you enjoy and learn from this blog. MPC notes are a very interesting category of numismatics. Thanks.

What a beautiful MPC. Great art and intent on every MPC.

I only have few bills in my collection, I'm enjoying slowly learning more about printed currency these days, thanks!

Nice addition to your collection. You have a wonderful wife!!!

I have to thank you Longstrider for these MPC blogs. It brought back some amazing memories (some, unfortunately haunting) from my grandfather's military career. Even family members not interested in collecting have taken a liking to these!

You have a spouse that buys numismatic gifts!!?? That's amazing on its own. I truly enjoy MPC's but only have a few. Nice blog.

Wow, That is a beauty. You are a lucky lucky man, you better take care of your Esposa when her Birthday comes around. (:

Way to go Debbie!!!! Thanks for a very informative article. I have a lot to Learn about these. I had to laugh, I think I've known several allegorical women in my times

Your collection keeps growing its great to see. These bills meant allot to the soldiers. I have seen many of them. You have got to keep going my friend. The fun is in The hunt.. Thank your wife for this wonderful gift. Does she know my birthday? She knows what you like!!.

What a beautiful addition to your on-going collection! These MPC's are really cool! This one is especially nice...I love the design and the ink colors. Thanks for all your research and for educating us on these historical notes! Happy Birthday Week! ; )

Very nice birthday present. MPC is an interesting area to collect. Learned all about it here on the ANA blog site. I will be on the lookout at coin shows for some of these. Never did get into the paper money collectibles, but I find these very interesting and attractive collectibles. Thanks for posting.

Having a wonderful Spousal Unit is fantastic, having one who gives gifts like this....priceless! It don't get no better than that! She is definitely a keeper! I'm talking about the wife here. Again, happy birthday!ūüéā