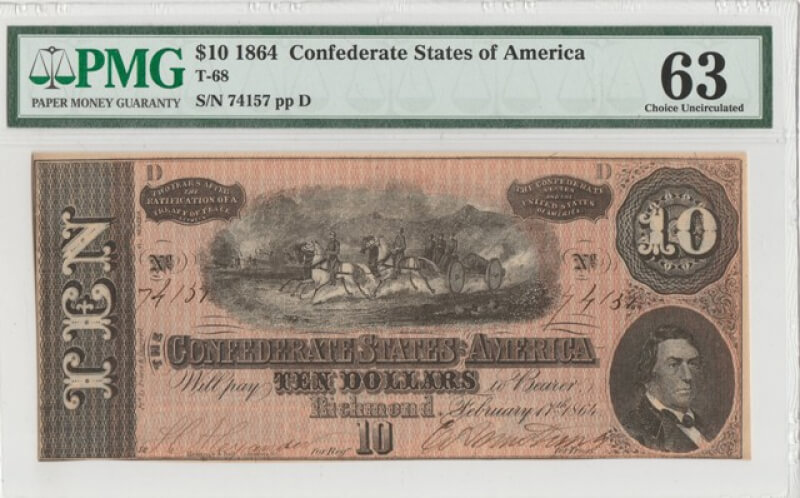 Below I have my example of a Type -68 or T-68 ten dollar Confederate States of America note. I enjoy collecting and studying Civil War money as I believe it is an important part of our history. By studying the era, perhaps we, as a nation, won't make the same mistakes again. Also I find them very beautifully executed. In the center of this note is a horse drawn artillery carriage. On the lower right side is a portrait of R.M. T. Hunter. He served briefly as  Secretary of State as well as a Confederate Senator. This note was to be payable two years after the ratification of a Treaty of Peace between the Confederate States and the United States.

My example is a series 6 making it a PF-27. That is a reference number used by Fricke. It also has a Criswell number of 527. These numbers are from the two people that studied and list all the possible varieties know at the time. Similar to Breen numbers for our coins. The T-68 has 44 PF numbers or varieties. Its serial number is 74157 and was issued in Richmond, VA. on February 17th,1864.
It was printed by Evans & Couswell on a quality white paper. They were colored with a pink to red overprint. The darker the red the more expensive it is. The reverse is blue with the denomination.
I am going to leave it here as the varieties go on and on. There is much to learn for those that wish to. If you decide to collect Confederate currency beware. There are many counterfeits. I tend to buy only graded notes by the 2 major TPG.
Any mistakes here are mine. I hope you enjoy this blog and photos. Please feel free to comment. Thanks for looking.
SOURCES:
COLLECTING CONFEDERATE PAPER MONEY by Pierre Fricke Field Edition 2008
WWW.OLDSCURRENCY VALUES.COM

Beautiful note! I love the old designs with all the details...so classic! The Civil War Era is a great time period to collect coins, tokens and currency. Thanks for the interesting blog!

This was a wonderful blog. Thank you.

Nice blog. I really enjoyed your passion of collecting and sharing information.

Very nice. I do like the notes from this era. Aside from the Confederate notes, there are many affordable offerings.

Beautiful Note, I have noticed that Confederate Currency seems very expensive nowadays, seems like when I started collecting, it was quite the opposite. Thank You for Sharing!!!

You are correct. Some are crazy expensive. I'd hoped to collect and entire set but that seems unlikely now.. Oh well.Look at what Mike Byrne did. Never give up.. Thanks for the comments everyone..

Absolutely wonderful. They have so many designs of everyday living. That's why the numbers and sometimes who signed them. I learned that from you. The railroads the working in the fields. It's like a picture history of the south. There done very well and as yours some come.in high grade. They survived a war and should be treated as our history. It happened good or bad it's part of our nation. Thanks for sharing those. Mike

That is one nice note, highly graded with great color and an excellent design. I love confederate money be it notes or coins. You can learn a lot about the Confederate states of America just by the money they issued.