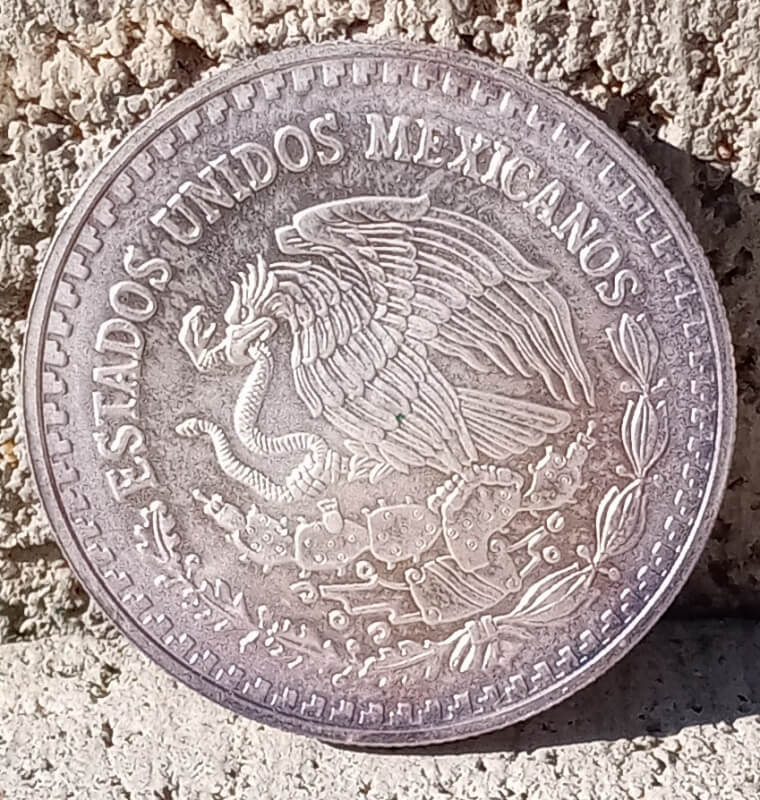 † †Well, I waited for someone else to write this but it doesn‚Äôt look like that will happen. I guess it‚Äôs up to me. Below are the coins that I was given on Father‚Äôs Day. Before you start wondering how many kids I have I want to say that these are from all the Creatures that live in The Compound.

†† First off is a beautifully toned 1997 one ounce silver Mexican Libertad. I collect these beauties and this is one I needed for my book. The photos don‚Äôt show it that well but the Obverse, with the eagle, has a great blue toning along most of the edge. The reverse has an overall dark toning with blue highlights. Very cool coin. Next up is another coin from Mexico. This one also goes in an album. My Dansco Mexican Type Set of, now, older coins.

†† This is an example of the 1957 one peso circulating commemorative coin. It is a celebration of the 100th Anniversary of Mexican Independence. It is 34mm and has a silver content of .100. It is starting to develop a subtle golden toning.

†† Next up is the 2022 Niue minted, non circulating New Zealand dollar coin. It is 39mm of pure .999 silver. On the obverse is Queen Elizabeth II. The obverse shows a tiger fighting a Komodo dragon. The Komodo dragon is my favorite reptile and was the logo of my reptile breeding business. It is a proof issue. If one looks closely you can see where the mint messed up on the frosting of a bamboo stock. It is left of the tiger. Not sure if it is an error or a VAM as I need more coins to tell. Hmmmm‚Ä¶

†† The last coin is truly amazing. It is a copy, in silver, of the gold Pan Pacific Exposition coin. A coin issued to honor the Expo back in 1915. It was held in San Francisco to honor the completion of the Panama Canal. It is an odd octagon shape with the reverse featuring an owl on a Ponderosa Pine branch. The obverse has Minerva, Roman goddess of warfare and wisdom facing left. The inscription ‚ÄúIN GOD WE TRUST‚ÄĚ included. The top of her shield has the Roman numerals for 1915 inscribed on it. I have always wanted one of these coins but they are crazy high priced. This two ounce silver copy of it works real well for me.

†† That‚Äôs it for me. I‚Äôm hoping others will show what they received. Remember it‚Äôs not the gift that counts. It‚Äôs the love it represents. Happy Father‚Äôs Day to all.

OMG, I NEED ONE OF THOSE PAN-PAC $50 SILVER OCTAGONAL ROUNDS!!! THAT COIN IS ONE OF MY FAVORITE COINS OF ALL TIME!

Impressive. I'd like to see that blue toning! Blue/purple are my personal favorites in the crayon box for silver toning.

Happy Father‚Äôs Day to those of you who are dads. I didn‚Äôt get any new coins this year from the kids, lol. They think I have enough already. Thanks for sharing your Father‚Äôs Day gift with the rest of us LS.

Wonderful coins, thanks for sharing your beautiful gifts with us!

Beautiful coins. The one from Niue is my favorite. Super cool!

That's not bragging! You made out like a bandit as you should! You are the BEST Poppa in the World and the Creatures of the Compound are delighted to shower you with coins! ; )

That Libertad is beautiful! ; )

I think there great coins. I have a few but yours are nice. I enjoyed reading a Blog . Thanks for sharing them with us!

Thanks Mike. I hope it doesn't come across as a bragging blog. It's not.