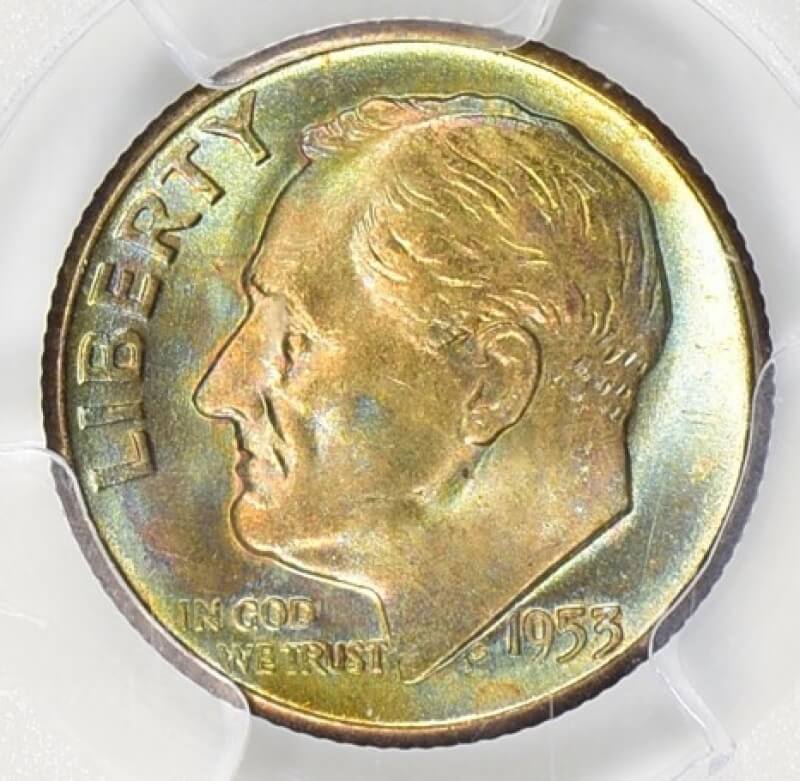 In the course of looking for nice coins for my collections, I have started noticing a new, to me, coin I have ignored. That would be pre 1965 silver Roosevelt dimes. I am a big fan of toned silver coins. There seems to be a lot of them around as well as being relatively reasonably priced. That being said, I decided to bid on a few and see what I get. Below are photos of a few of my auction wins. I have to say they are nicer than I had hoped. Great natural color on them. I believe these may be a profitable coin to collect for the future. How many nice, affordable Mercury can be left?

The two major third party grading companies now recognize the full torch or full bands designation. This refers to a full separation in both the upper and lower crossbands on the torch. This indicates a full, well struck reverse of the coin. It is similar to the same designation on Mercury dimes. This makes the coin much more desirable to collectors.

The mint started coining these in 1946 and continues the issue, with a few changes, through today. I am interested in the pre 1965 coins that were made in silver. John Sinnock designed them, although decades later a claim was made that Selma Burke was the designer. Another issue that arose was the J.S. designer initials on the coin. From the beginning his initials were on the reverse of the coin. This was moved to the obverse in 1968. The bigger deal was the communist fear of the Cold War era. John Sinnock shares the same initials as Joseph Stalin, the communist leader. The mint was forced to issue a bulletin stating that Stalin had nothing to do with the coin. Sounds crazy unless you lived during the "drop and cover" Cold War Era.

There are many additional interesting facts about this series and president Roosevelt  but I am trying to keep this short. I encourage you to research yourself. Below are photos of my 1958-D MS 66 FB and my 1953-S MS 65. I hope that the colors show up well. After my research and learning some of the history behind this coin, I am going to keep an eye out for nice high grade toned examples. I guess it's time to get some more current coins. Not that I will give up my other coin pursuits.

Thanks for reading this and checking out the photos. Please feel free to comment!!

Once again I forgot to source my blog. It is as follows:

These are some beautiful dimes! I usually collect my favorite...Mercury Dimes, But I have to say this is something new to look into! Thanks! Great blog and photo's Longstrider ; )

I call it toning. So does the hobby. All the articles I have read and books don't quote Wikipedia. Some are done on purpose some are fake. Some are hues a light blue or gold.. I'm not very technical that's why it's called toning. Mike.

The technical term for toning is "Thin Film Interference". It is the same effect on coins as an oil sheen on water. The thin film on a silver coin is caused by a reaction between sulfur, moisture (H2O), and silver resulting in a thin layer of silver sulfide. Light reflects from both the surface of the coin and the thin layer of silver sulfide. The reflected light cancels and adds on itself. The resulting color then is dependent on the thickness of the film and the wavelength of the resulting light. A helpful link: https://en.wikipedia.org/wiki/Thin-film_interference

You picked a great series. Toned FDR dimes are not #1 on the hit parade, so you may be able to make some good finds.

Great photos. I believe the Roosevelt dimes are the "Roger Dangerfield" of coins. Don't get the respect.

I only need one more Roosevelt pre-1965 for my collection hoping to complete it soon. it has taken me one year so far, all I need is the 1947-s, which I somehow have not found yet. Nice coins, however one has a bit too much toning for me.

It's definitely not for everybody. Thanks!

Beautiful coins. There are nice I don't like overbearing toning these are good. Still see the luster and these are underrated as far as my opinion goes. Good wins and a great blog. I enjoyed the difference in who designed what. The cold war issue I enjoyed. The mint came out with a statement saying Joseph Stalin had nothing to do with it. That I never heard be careful they might open an investigation. Thanks for your work and sharing your history and coins. Mike.

Those are some really nice dimes. It is strange to me how one side as all the toning but then the other is just plain.

It can be crazy. That's one of the reasons I love toning. One side was probably open to the air and the other wasn't. Maybe... Thanks!