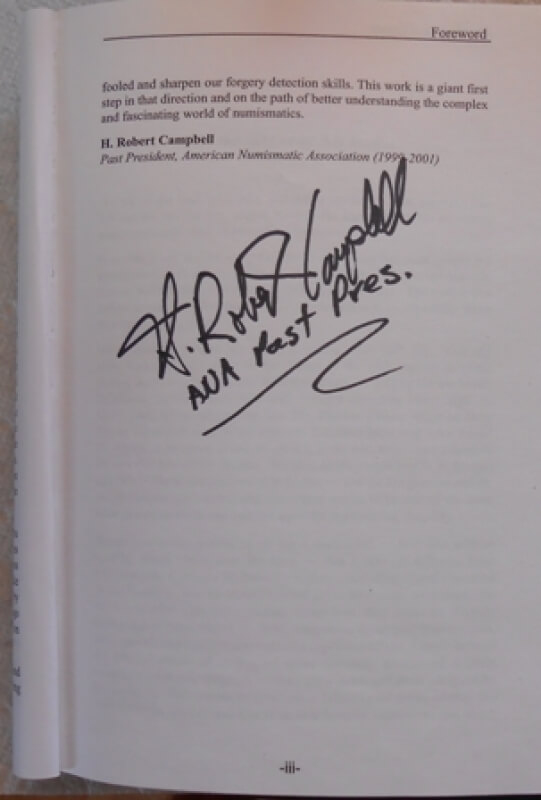 11 Mar 2016
Well, I believe it's time to cause some controversies! I bought this book while I was at the second semester of the 2015 Summer Seminar. It was presented during the course on "Detection of Counterfeit and Altered Coins". I was lucky enough to have it autographed by Bill Campbell, past president of the ANA and Brian Silliman, another of the instructors. This book tells some of the procedures that "coin doctors" produce and alter coins. It's not a recipe book but it's pretty close. Everyone should read this. Without going into to much detail, it will show you that just because a coin is in a slab, that doesn't make it genuine. Shocking news, no? Here is an exert from Amazon:
" Charles Larson's journey into the subject of numismatic forgery began over 30 years ago, but his insight was substantially enhanced while serving as a prison guard to the most infamous master forger of the 20th century, Mark Hofmann. The informal interviews Larson conducted with Hofmann at Utah State Prison in the late 1980s lay the foundation for a number of methods revealed in Numismatic Forgery."
If that doesn't arouse your interest nothing will. That's about all I want to say about this book. You can buy this book directly from the ANA gift shop if it's still available. If not, it's at all the regular sources. Good reading!! Oh yeah. Don't try to duplicate any of the the procedures in the book. Especially the "Use of Explosive Impact Copier"!!!!!

Great suggestion. To buy the book AND to not try the explosive impact copier technique. :)

A very good idea to have a book like this, especially if you deal with valuable coins. Forgery, although often discovered, is a growing occupation!

Sounds informative and practical, and yes, it's always fun to get an autograph.

Hi! Just wrote a blog on the subject! It time for a book! A reference book. Done like the the RED BOOK a picture of the good coin and pictures of what to look for. I'm not getting into a blog give it a quick read mike

The typical collector will never be able to tell the real from the fake without reference material such as the one you discuss. Thank you!

Where can you buy it?

Sounds like alot of interesting info! I'll have to check it out!

that sounds like a great book to add to my numismatic library and an interesting read! I just books signed by Ruta Sepetys yesterday so I kno0w how exciting it is to your book signed

Can't beat a blog like that. Exceptional especially at this time in history in the hobby. NGC has slabed Morgan dollar's. This is fact. So we have to stay informed. Thanks to you some collector's are starting to realize how important this subject is. Thanks a lot for taking the time. Mike