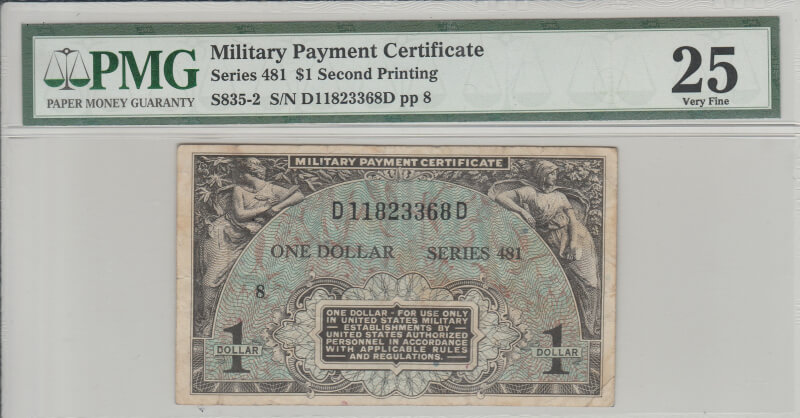 Ā ĀThe newest member of my MPC or Military Payment Certificate is this nicely used one dollar bill. As I have stated in some previous blogs, MPC were used as payment to the military serving ŌĆ£In CountryŌĆØ. This series was issued June 20, 1951 and ended May 25, 1954. It was used all over Europe, Korea, Philippines and elsewhere that our military was stationed. The printing was performed at Forbes Lithograph Corporation, Boston, MA..

ĀĀ This One Dollar note was done as a Second Printing. ItŌĆÖs serial number, D 11823368 D falls between the listed numbers of D 06720001 D and D 12880000 D. There were a total of 6,160,000 of this run of One Dollar notes printed. These numbers may seem boring but to a collector they are very important as prices for them very wildly based on their serial number and plate position. This notes plate position is ŌĆ£8ŌĆØ and appears on the left side. If this note were a replacement note, there would be no letter D at the end of the serial number.

ĀĀ The Series 481 is said to be a transitional series in that the design is much more ŌĆ£artyŌĆØ than the seriesŌĆÖ before them. A vignette is used in the dollar and higher denominati0ons. This vignette is called Mechanic and is featured on both corners at the top of this note. This same vignette appears on the face of the 1,000,000 Treasury bill.

ĀĀ The MPC series after this 481 used different vignettes for each denomination over one dollar. One the back of the note is The Great Seal of the USA. This same vignette is used on the Series 472 which followed this one. I bought this particular note because I try to get MPC that were ŌĆ£usedŌĆØ. This is not as easy as it would seem. This one is graded by PMG as a Very Fine 25. As noted on the back of the slab it has some small staining. All this adds to the value for me. This is a note that has done its job.

ĀI hope you enjoy this small blog and appreciate the history behind collecting MPC. Please feel free to comment and ask questions. I will do my best to answer them. Thanks for looking.

Yet again your interests amaze me. I like the intricate work put into these forgotten treasures.

Part of me is glad, my time spent in the military, I didnŌĆÖt have to deal with these types of things. And to think, like other forms of currency, this is collectible is pretty interesting. That being said, this looks like a nice, well kept piece, especially considering how much military personnel may be known to trash things, even important things like moneyŌĆ” hahahaha.

I love how many different designs there are of MPCs. There is so much variety, and the artwork is incredible. Longstrider, you have a very nice collection, and I enjoy reading about these in your blogs!

Precious items that hold American military history, they should go up in value as years go by . Nice you have them .

Nice MPC! You have quite the collection going on! I also like that the MPC is "used"... Very cool! Thanks Longstrider! ; )

Awesome MPC addition there! I enjoy learning about them!

I never new all that went into these. I think the design is great. Especially the Eagle on the back. Looks very familiar. Looks like allot of work went into these. I like this one. I know they changed them after a certain period. And issued new ones. Thanks for the information. Good blog my friend!