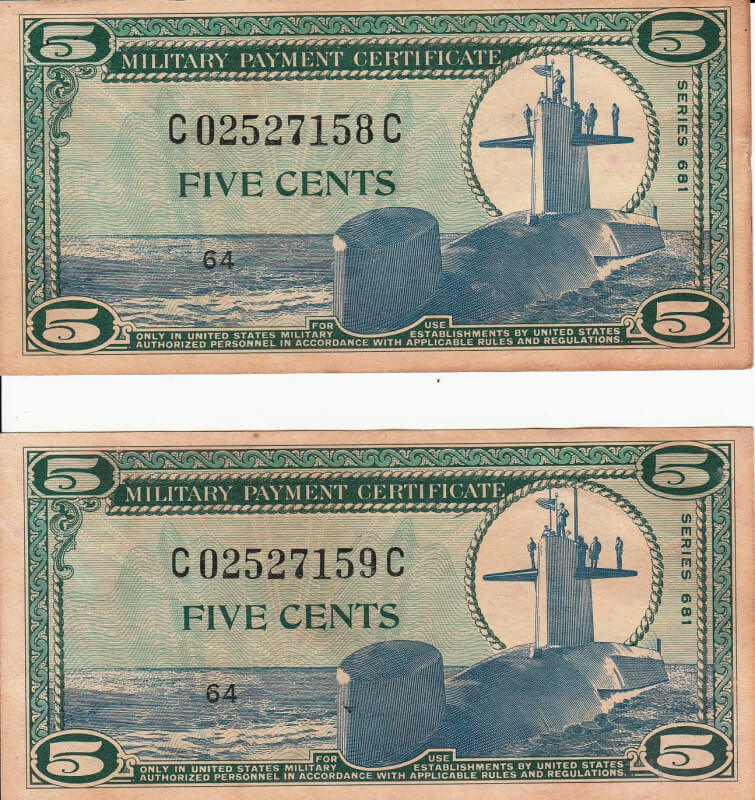 Recently we seem to be looking at currency serial numbers. I would like to add to the discussion with a new purchase I received the other day. A lot of our members are aware that I collect MPC or Military Payment Certificates. I subscribe to an MPC newsletter called the Gram. Two weeks ago someone listed these two notes shown below for sale and I scooped them up.

As you can see these are two Series 681 five cent notes. The cool thing about them is that they are consecutive serial numbers, C02527158C and C0257159C. Since both of them are block position 64, we can say they are indeed consecutive.

The series 681 MPC notes were issued 11 August, 1969 and withdrawn 7 October, 1970. They were only used by service men and women in Vietnam. Based on the serial number they are from the first of two printings. There was also one printing of Replacement notes. The front of these notes features the Ethan Allen class nuclear submarine Thomas Edison. Some members of the crew are standing on the sail and the American flag is flying. These facts are known because John Semeniuk identified his sub from this picture taken of the coast of Scotland. The construction on the front of this sub is unknown in nature. This particular submarine was used for special operations and this is thought to have been constructed to assist in one of these secret missions. The back shows Major Edward White during his famous space walk during the Gemini 4 space flight.

The block position refers to the actual configuration of the notes on the sheet of paper they were printed on. For this series fractional notes of 5-50 cents were made with 84 individual notes on each sheet. It is a bit confusing to explain the layout so please check out the photo below.

I hope you enjoyed reading about my newest acquisition of MPC notes. By the way, these two notes came to me from a collector in Singapore. Pretty cool. Thanks. Feel free to comment.

Excellent acquisition! Marvelous blog with great history & research. Had one of these a while back, but sold it. Was an earlier issue. 481 if I remember right. (Not SURE) From the late â€˜40â€™s, earlyâ€™50â€™s. You would probably know better than me. Thanks for sharing!

Loved this blog a lot, Longstrider!! Thanks much for sharing it. Excellent military issued notes. I admire your WWII colkections, love seeing them. I have also admired your greater Mexican coinage colketion, impressive. Loved seeing that submarine and its sonar capsule. Great details.

A pair of beautiful notes Longstrider, now I am compelled to contact my friends in the boat community and find out a bit more about that interesting proboscis. Thanks for sharing, love those MPCs.

From one who has long had a fascination with Naval history, I would have bought these simply for that reason. They don't seem to appear that often. Thanks for sharing your new boat note!

As always an interesting blog! Thanks Longstrider! You never disappoint... Great subject matter, great history and lots of references! Your MPC collection just keeps growing! And I must say... These are some cool and rare serial numbers! I really like the 681 Series with all the military designs. Great photos too! ; )

Now those are great examples of notes. Two serial numbers that is a true rarity. You don't find them in war notes. But you did. The history is remarkable. That's good research. And a great bibliography! I might read up on them. Your collection is growing . I love the designs. Can't beat them. You worked hard to get these . Congratulations You deserve it Great blog history researching and a bibliography. Everything a good read needs. Thanks for sharing these with us. I will read it again!!