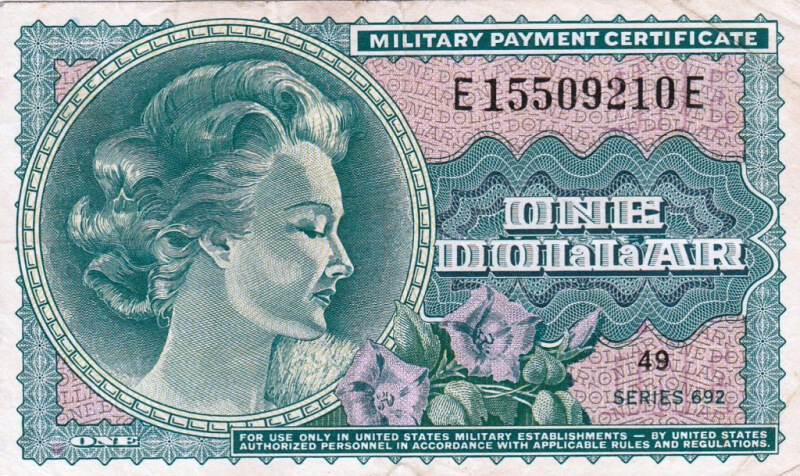 I just noticed it has been quite a while since my last blog. I guess it's time for a new one. I have a dozen or so new Peace Dollar VAMs to share but I believe I will take a different path today. I have been getting back into Military Payment Certificates, MPC, again and would like to share some with you. My last blog on MPC's was about Chief Hollow Horn Bear. He is on the Series 692 ten dollar bill. I believe this is one of most sought after bills. If you would care to view this blog it is listed here on 20 April 2020.

I am going to stay on this series of MPC's for this blog. It was produced during the Vietnam War. Generally speaking this series was produced from October 1970 till March 1973. They are the last series that was released for use by the military. There was a series 701 however it was never released. All notes were destroyed by fire. Of course there are a few that escaped the fire and are highly desired. I am going to talk about all the notes I own at this time instead of several separate blogs. I hope you enjoy it.

I already described the ten dollar bill in that earlier blog. Check it out. The next one is the twenty dollar. The front features the famous Indian Chief Ouray of the Western Colorado Ute Indians. He is famous as a "Man of Peace". The back of this bill has the Hoover Dam. I bought this bill raw and was lucky to get a grade of 35 Choice Very Fine, First Printing from PMG. The size is 6"x2 Â˝". I am going to be brief on these famous pieces of currency. I encourage anyone to do further research on their own.

Next comes the one dollar. This is still a raw piece. I would guess it will bring a similar grade of 35 or so. The front shows a beautiful allegorical young woman with flowers in front. The back is a copy of our 1901 ten dollar Bison note. It has a nice copy of the bison facing us. This bill is 2 Â˝' x 4 ÂĽ".

Next is the ten cent note. Shown on the front is a stylized Greek statue of a god seated holding a faces and plumed helmet. The back is an American Bald Eagle with wings spread. He is perched on a faces with olive branches.  My example is a 66 Gem Uncirculated, Exceptional Paper Quality, First Printing. It is about 4 ÂĽ" x 2 1/8".

In closing I would like to thank Brianna at our own ANA for putting on a fantastic Webinar on MPC by Fred Schwan. I find collecting MPC a great change from my usual Peace Dollar VAMs. It's a nice break. There is a lot of history behind all the MPC's to be learned. I can't encourage people enough to give them a look. Thanks for reading this blog. I hope you learned some new facts. Feel free to comment. Thanks!

This link is care of I.R. BAMA--https://www.astonisher.com/archives/museum/hollow_horn_bear_little_big_horn.html

These are interesting and diverse. My guess is that since these are MPCs, their designs are not as scrutinized as regular circulating currency designs.

Bama, you're killing me, "who's the babe on the bill?" lol, I was thinking the same thing! LS, these are sooo cool! As I have stated before it is an area I am not that familiar with and I just love em. Thanks for the knowledge smack down and the pictures. Later!

Interesting area of collecting. I have never really known anything about these notes. I like the 1 dollar the most. They are all really nice MPC's. I will have something else to look for at the next show. I usually don't spend much time with the paper money and notes. I will spend more time at the paper money dealers and see what they have in this area.

Wow, gorgeous collection of MPCs there Longstrider, you might just lead me down that path as well. Thank you for sharing and lets hear about those new VAMs soon!!!!

What a collection LS. Wow! I am starting to get into MPC as well, but not nearly to this level... I would go broke! LOL. Nice work, I hope to see more blogs from you! Cheers, NM

If you buy them raw some are not too expensive. I try now to get them graded. That is a LOT less expensive than sending them into PMG. I don't like the PCGS graded because they are much larger than PMG and require a separate plastic sleeve sheet to put in an album. Just me.. Good luck.

Wow! This is a great collection you're putting together! They are beautiful...really detailed and colorful ; ) Thanks for putting up this blog! We've missed your posts Vam Man! ; )

An Area of the hobby I don't know much about. Thanks for the blog.

This is probably going to bring back a lot of memories for folks. I have I think 2 MPCs at least one in my collection. I enjoyed seeing all of these, the art is really great. The writing on the One Dollar I had to stare at to read the "One Dollar" So who's the babe on the bill??

The babe? Nobody knows. The government was just trying to get these out. Some are awesome and some are quickies.

MPCs have some incredible art on them, and I couldn't imagine carrying that around just to spend it, but I guess you had to. If only our actual notes were this pretty. Thanks Longstrider!

Beautiful collection. It's amazing how important these were. Without them the enemy could bring down the economy of other countries. Counterfeiting was big did I g the war. These are great pieces of history. Thanks.