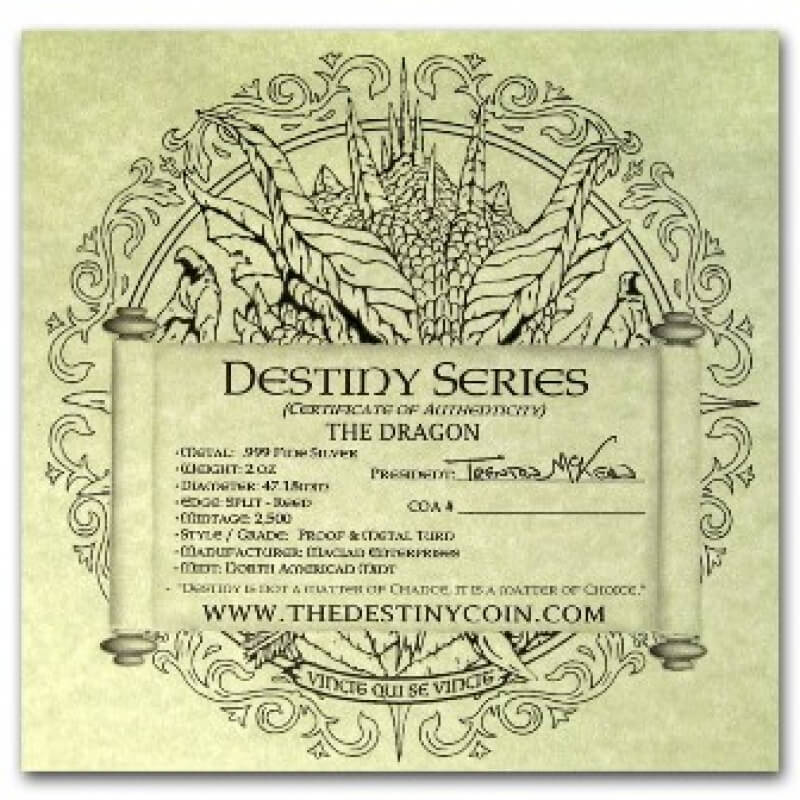 No one has done it so I will. This is my Fathers Day gift blog. “Destiny Is Not A Matter Of Chance, It Is A Matter Of Choice.” This is what is inscribed on my 2 ounce silver bullion coin. This is the second coin in the Destiny Knight Series of coins. It is aptly called The Dragon.

These, to me, are words and beliefs to live by. That is why I have a few dragons on my body. Dragons also symbolize wealth, intelligence, guile and control over stormy weather. Most cultures of the world have some type of dragon beliefs. Many give the dragons different and varying powers.

Now to the coins specs:

It is 2 ounces of pure .999 pure silver. Its mintage of only 2,500. As you can see in the photos, mine is number 230. The reverse depicts the Dragon with a very intricate design bordering him. Below the Dragon is the inscription” VINCIT QUI SE VINCIT” which translates to “He Conquers Who Conquers Himself”.

The reverse features a Knight of the Maclan Clan as it is engraved on his shoulder armor, seeking his revenge. His right gauntlet is inscribed “2 oz .999 Fine Silver. In the background, over the knights left shoulder, is a sinking gold filled Spanish galleon. Over his right shoulder is a Scottish village. The edge has the coins unique serial number and is reeded. The coin is 43 mm in diameter and weighs in at 2 ounces and has a thickness of  4 mm. The coin also comes with its own Certificate of Authenticity.

I hope you enjoyed reading this blog and learning about it. Please feel free to comment. Thanks Kiddo!!

Wow! Beautiful Dragon Longstrider! I love that it has a history behind it. Really impressive piece. So let there be dragons...

Beautiful coin. I may have to look at getting one of these.

That is one beautiful coin. The frosty cameo is brilliant, and the history is wonderful. That is a fairly thick coin being that it is 2 ounces of silver. apex has some great stuff.

It a great coin and better history. You know me with history can't get enough. Great set to collect lots of luck with it. Get them all and enjoy them. Mike