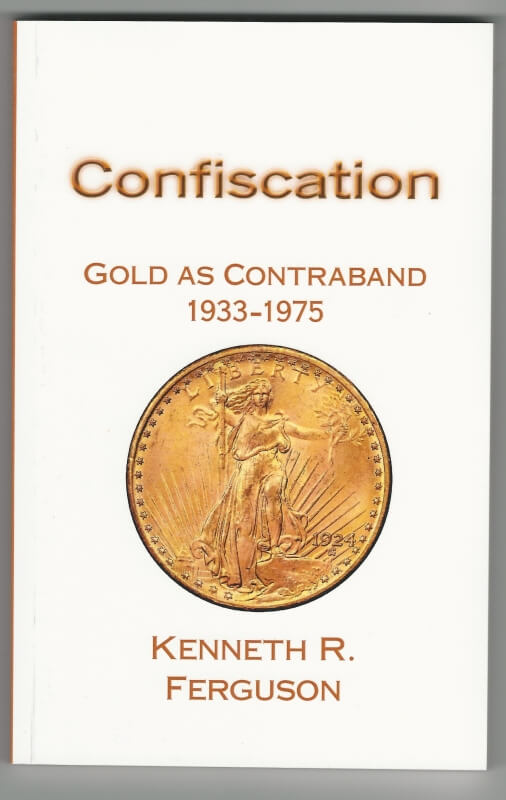 02 May 2018
Confiscation: Gold as Contraband 1933-1974 by Kenneth R. Ferguson was a pleasure to read. Ferguson writes well. I met Ken Ferguson in person at a coin show here in Austin. He speaks as intelligently as he writes. Our time together was enlightening.
Few people ever get past citing Executive Order 6102. Even when they do point to that document, they most often stop short of fully citing and discussing it. This book delivers the facts. Ferguson tells the whole story, going past 6102 to the subsequent orders and laws. He lays out carefully and logically the many relevant details that highlight this singular event. He also examines the public response. I was impressed with his explanations of how and why Britain, France, and Switzerland returned to striking gold coins after World War II, using dies from previous years.
This book carefully explains the intentions and consequences of the rolling orders and laws that redefined the monetary policy of the American government in the 1930s.  In 180 pages, this book provides a close and yet conversational examination of Franklin D. Roosevelt's executive orders and the related Congressional acts that became laws. Ferguson identifies and explains the half dozen presidential orders and parallel banking acts, the criminalization of gold ownership, and the exclusions left open to numismatists. Turning to the international theater, the presentation builds on the official purposes of the Bretton Woods accords to illuminate the history of the 1950s and 1960s.  It was that context which provided the impetus for President Gerald Ford to lift all of those restrictions in 1974.
From there, Ferguson considers the modern world, whether and to what extent gold is money, whether and to what extent it is an investment, and the prospects for a repeat of the draconian laws of the 1930s. That last is too often a springboard for ideologues who sell gold coins to harry the public into buying them. As a professional dealer in numismatic rarities, Ferguson shows more aplomb.
Ferguson earned his master's degree from the Lyndon B. Johnson School of Public Affairs at the University of Texas at Austin. Since then, he was worked as a coin dealer. Those two facts explain why this book rests on careful research. His bibliography of 35 sources includes works by both John Kenneth Galbraith and Milton Friedman as well as authorities such as Q. David Bowers, John Craig, and Hans Schlumberger who are recognized within the numismatic community.

Please be more active, it seems like you have a good supply of information.

Sounds like a great book to read! Thanks for a good review. The book cover is beautiful, but it is kind of funny that it doesn't feature a 1933 "Saint".

I agree with CoinLady. It seems odd they didn't choose a 1933 for the cover. Oh well. Great blog surely a book worth reading.. Thanks Mike!

Mike you know I would love to read this book. Just for the history . But I do enjoy your blogs very much. They keep me going. Thanks for taking the time without your blogs I would know about these great books and authors. Thank a again Mike.

Thanks for posting this. I want to read this. Maybe the 1933 $20 would have been a more appropriate cover model.