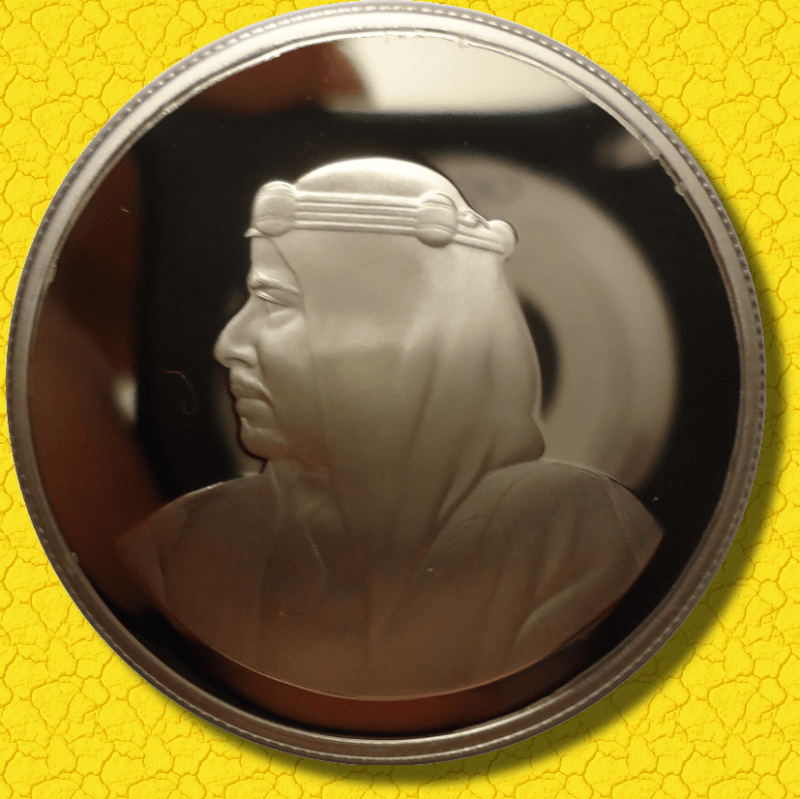 WWF 25th Anniversary: Bahrain - Rhim Gazelle The Rhim Gazelle (Gazella leptoceros) is the only Gazelle that has evolved specifically for the dessert environs with specific adaptations to their hoofs which are enlarged for ease of travel on hot sand. The result is that they actually can't walk well on flats, and can not even out run a human being on normal terrain. They have a very pale coat with reflects sun light rather than absorb it like most gazelles. They do have very dark tails. They also have slender s curved horns and which lives in North Africa and Libya.

However, the Bahrain coin, which is identified as the Rhim Gazelle coin, actually described the species Gazella Subgutturosa Marica, an entirely different species, Subgutturosa, and specifically the subspecies Marica which roams Saudi Arabia, southern Syria, southwestern Iraq, Oman, the offshore Persian Gulf Islands. This is a vulnerable species which has a large cartilaginous cylinder in the throat which in males increases in size during breeding season and produces a deep powerful vocalization for courtship. The migrate in heards and are swift runners. Once present all over the near east, they are likely the horned gazelle referred to in a number of places in the Hebrew Scripture know as a "Reim".

This coin might be the best of the WWF series with an exquisitely carved reverse with the gazelles both bold and graceful. The obverse simple a graceful portrait of the Amir H.H. Shaikh Isa Bin Salman Al-Khalifa uncomplicated of any background lettering or complicating design, leaving the obverse with an outstanding composition, especially with the proof.

Very cool coin. I love to see animals on coins. Shows something about the country.

Cool coin! The last good blog this guy did.

Beautiful coin! Thanks for sharing it!

That is a nice coin. Although the coin doesn’t have a date or any context on it…

Beautiful coin. Nice information and blog. Thank you for the post. Can't find this in pocket change.