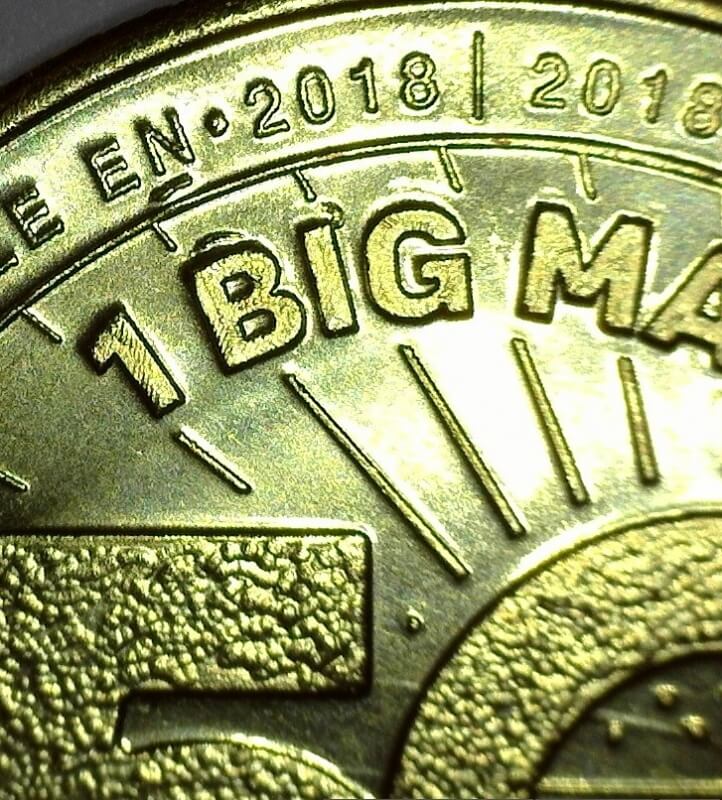 Yeah, I'll confess - I went out yesterday and was able to obtain the entire set of FIVE McDonald's Big Mac Tokens (please stop calling them coins, people! Just because McDonald's does it, doesn't mean you have to - you should know better, as a coin collector!!) Yes, I still have two Big Macs waiting for me in the fridge at home; yay, McDonald's for dinner two nights in a row! Anyway, my wife (gotta love her!) was kind enough to go out to lunch and get me another one for our collection, so I now have an extra 1988-1998 specimen; six total tokens. Unfortunately, the original packaging split open on her (she knows enough not to open things like this up; she's amazing!) but luckily, she still knows how to hold these shiny objects we love the correct way. So, I got a chance to inspect at least this one token a bit better, without having to look through a plastic wrapper - and man, am I ever glad  I did! As a die variety junkie, I was excited to see some die clashes on both sides, as well as a nice die break! I know someone online  could certainly prove PT Barnum correctly if I listed it for auction; who knows how much someone would be willing to pay for it, but I'm keeping it, along with the other one in my full set with the same clashes and die break (and per the little card that came with it, it states these are actually not supposed to be sold or auctioned - really? Then how did so many of these tokens wind up on at least one online auction site a few days before they were available to the general public?! Hmmm...) I think the hype will die down very soon (unless all the McD's in America run out of them - and it looks like it could actually happen sooner than most of us realize! Do the math - each location reportedly received 50 of each token; 250 total per store, per 14K locations. That's equivalent to 3.5 million tokens, or about 56.5% of the entire 'mintage,' The other 43.5% were reportedly distributed across the rest of the globe.) At any rate, I got my set, so I'm done and happy, and full of many all beef patties, special sauce (aka, my new blood type), lettuce, cheese - and you know the rest, on some sesame seed buns. I might go back to the same location here in Colorado Springs by my house, to see if the nice manager who let me dig through the box yesterday, will let me look for just one more of these 'varieties" - if I can 'stomach' another trip there (and remember, go during the slower hours if you want a shot a cherrypicking these tokens; no sense in going during a rush!)  Have fun with these, everybody! -Sam Gelberd, ANA Numismatic Educator

Heck, I'll collect anything coin or token! May not be worth anything but its pretty cool and even better that you have identified die varieties and errors.... There's a book in you to write!

I checked eBay yesterday. It's a disgrace what these idiots are charging . Not only that go to the NGC pop site and price guide. Zero 0 the big 0 . I will get personnel I hated the whole thing I still do. I think it cheapens the hobby and I don't collect abstract art. If there ever worth anything i will be dead so I won't care. Remember collect what you like that was only my opinion. It may offend some but this is not a joke. It was a money deal with NGC. They should be ashamed of themselves. One guy has a set for 1500 dollars. He got no bids. He reposted them again today. So something he got for nothing he thinks there worth 1500. This is out of control. Again I know someone has the complete opposite to say. I'm not offended. I welcome it. I'm mad at the hobby and NGC . Who knows what else they will slab for money. Any other grader slab them I did not check.. well those of you who bought slabed ones enjoy them. We should always enjoy what we collect and I do wish you well. Nothing is personal. Just my opinion. So everyone enjoy your collection. Mike.

I will be fully honest, I have never eaten at McDonald's; it started out with my parents not letting me, and now I am a vegetarian so it will likely never be a delight I can indulge in. Cool tokens anyway!

Your a lucky person. Mike

I really don't think that in another fifty years they will make more. Maybe a reverse proof set. You buy them you deserve them..

This is a great blog! I heard about these yesterday and thought I need to get one! It's so funny that you found a die break! ; ) Really fun blog! Thank you!!

I do not eat fast food, but my grandmother works at a mcdonald's and told me about these, don't think I will try to collect them, although a die variety in a mcdonald's token is interesting.

Now that is a dedicated collector! Anyone recall Shell, Mr. President coin game? If memory serves me, that was 50 yrs ago!

I think I've heard mention that the Warren G. Harding token was the "key" to the series for the Shell Gas Co. Mr. President game. I try to remember that whenever I look in dealer junk boxes just for fun.

I just heard about these yesterday and you already have die varieties?? Clash and die break. dang!! You are indeed THE NumiNerd!! Congratulations!! Well done!

Thank you, Longstrider! I hope there are some more cool errors and varieties out there too; love to see some off-centered strikes, multiple strikes or even un-struck "planchets." I actually heard one store only received four of the designs, and they wanted to see if they were over looking and not seeing the fifth design, so they opened up ALL of the tokens they received in their allotment! Honestly, I'd be a little upset by getting handed a "new" token that wasn't in its original package, but that just means there are less of them around in the package; many will be opened up to redeem for a Big mac sometime this year, but who knows how many will remain in their package; should be interesting - I hope! -Sam G.

It's to bad for the vegans and vegetarians. No it's not a coin my cardiologist suggest Burger King less grease there broiled. It's to bad the mint didn't make them they would of sold out. Thanks for getting it straight it's not a coin. And we collect what we like. Its a token! How about that. I didn't think people liked tokens. How about now? It would be nice if a five star restaurant had them. I see your blood has two all beef patties special sauce pickle all on a sesame seed bun. I enjoyed that thanks the pictures are great. Mike.

Thanks, Mike! Yeah, my doctor is going to yell at me next time I see her. I'm still glad I got 'em though; I regret nothing I did to get these! (If I buy any more, I may just have to give them to some of the homeless guys near the restaurant.) -Sam G.

I have a friend that has several Big Mac's to eat in the next few days. It is nice there a numismatic give away going on. Maybe, it will spark an interest in people to collector other coins/tokens.

Thank you, "SUN"! People like shiny things, for sure, so maybe it will spark some collecting interest in some people out there. I'll bet I'm going to start getting some phone calls and e-mails from people here at ANA HQ shortly. I also heard someone mention that they think Wendy's and BK should start accepting these as well. Then they can sell the redeemed tokens online and even make a bit of money off of them - it's great marketing and could potentially generate income; genius!!