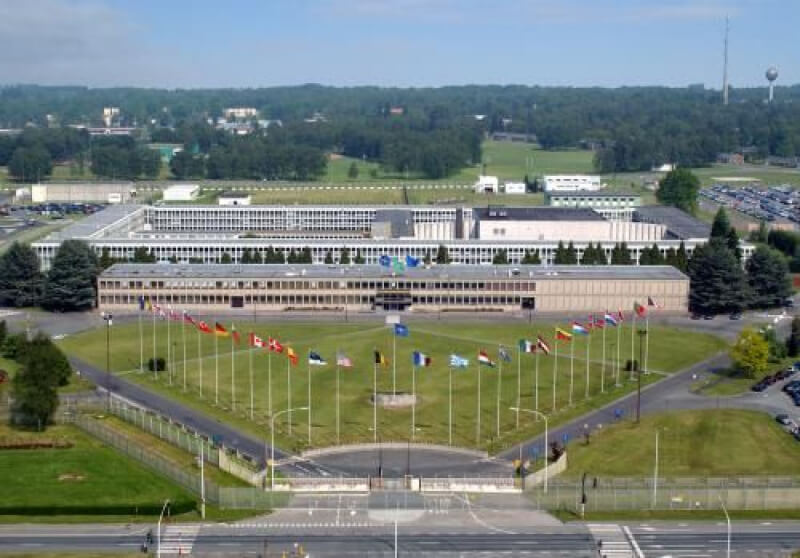 This is the last of the "bonus sets". When I ordered the 1979, the 1980 and 1981 sets were included. In 1981 I was thinking about rotating back to the United States from Belgium. General Bernard Rogers had replaced General Haig as SACEUR and would soon be rotating back also. My father-In-law had developed heart problems and was thinking about a 5 way by-pass surgery, so this was a situation that was also on my mind at this time. I had been on leave and found that there was a position opening up in 1982 at Hancock Air Base in N. Syracuse, N.Y. It had been the longest that my best friend had been away from home. My ETS (expiration of time in Service) was also approaching soon and I knew General Maddox who had come from the DIA and asked him to perform the ceremony to reenlist for the position in N.Y. and he agreed to do it.

This U.S. Mint set is just as nice as the 1979 set and the 1980 set. The 1981 Proof set has a mintage of 4,063,083 and was the last set to contain the Susan B. Anthony. Per the My Coin Guides Network "The mintage for the sets did experience a rise above 4 million. This was the highest since the 1976 Bicentennial Proof Set, and would represent a final peak before overall proof set mintages started to decline." The price of the set was again raised from the previous year from $10 to $11. Also per the My Coin Guides Network, "This price raise came once again despite the fact that the same number of coins with the same face value were included in the sets." Was the U.S. Mint running out of money?

In my next blog, I'll  preview the first U.S. Mint Prestige Set that I've acquired. Until then enjoy the pictures and stay safe, HEALTHY, and coronavirus free ! P.S. that's me seated at the console. I just happened to be on Day shift for the Commander's inspection!

Thanks for sharing this with us. Nice blog!

No problem Kepi ! Thanks for taking the time to read it ! Charlie

Beautiful set, as usual I enjoy seeing the "state of the art" computers in the background of your work. Now a Chrome. Funny. Thanks.

LOL John ! Yes, I traded in my console for a Chrome ! That's what happens when you're retarded...ooopppsss I meant to say retired ! :-))

Great blog. I like the way you interact your buying with your family. Keep it up. Soon you will have enough to fill a book.!!

Thanks Mike ! I'll be an aggressive collector as long as my credit card will allow me to be! LOL

Looks like your proof set is still looking nice. Are they worth more than 11 dollars today? Nice story and thanks for your service !

Charlie, that is what I call Nose to the Grindstone (during the inspection). Thanks again or an interesting history to go along with your proof set.

Yea Moke, it's strange how it seems they scheduled me for dayshift for the majority of the inspections....makes me want to go "hmmmm"...LOL

This was a great blog.

Thanks Koinkid ! I appreciated the kind words! Charlie

Thanks for another interesting blog including your personal story. I was wondering why you were in civvies while on duty?

Yes Bama, As I previously mentioned in one of my blogs, I was part of the "Deep State" for many years, both on-duty and after I left the military. I had 2 "civilian assignments" while on active duty which required me to be in civilian clothing :-))