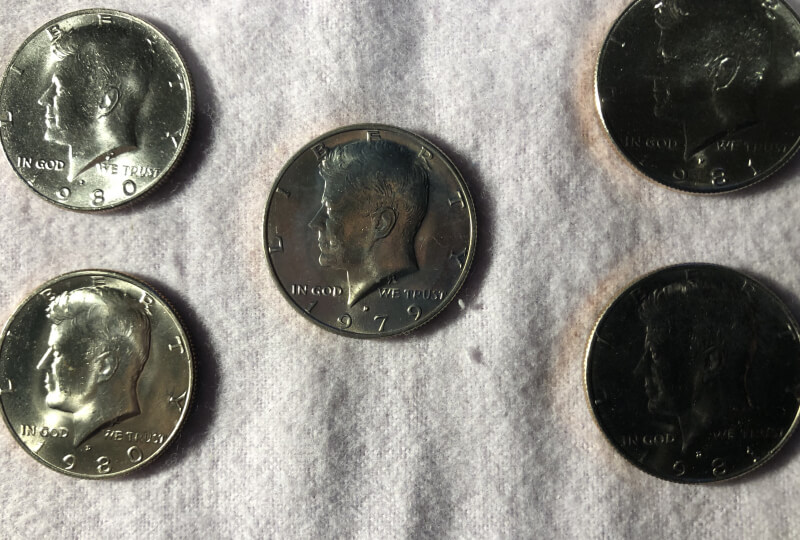 Is it just me or does everyone think like I do? Sitting here in the dark, rainy early morning, I was reflecting on how this month has impacted my life and how it intersected with my Kennedy Half dollar collection. I've decided to honor my brother-in-law's memory by associating him with my 1979 Type 1 & 2 Kennedys.  I met him just a few hours before I met my best friend, whom I later married. Yesterday, he passed away at his home in San Leandro, Ca. His name is Rodney Loucks but he just went by Rod. He helped my mother and father-in-law to pay for our wedding. Rod bought the "booze"  which everyone knows is no cheap deal. Rod retired a few years ago from the City of San Francisco. He was the CFO (Chief Financial Officer) for the city by the bay.  He graduated from the University of Pittsburg with a BA in finance and accounting which served him well. Rod liked to travel and came back to the East coast every few years to visit friends and family. One year he financed a family trip to Niagara Falls, Canada. We stayed there for 3 days to tour the city.  Rod was 72 and I had known him for 42 years. He was smart and a stand up kind of guy.
Speaking of bitter sweet, a couple of weeks ago, I lost a 3rd cousin to gun violence. She was just 21 years old. The newspapers and local news channels described it as a "domestic" altercation. Her father, my 2nd cousin was also injured with a gunshot to his arm. Her boyfriend also died of a gunshot wound. My cousin was beside herself that her grandchild had died a violent death.  My step Dad also passed away on 21 April back in 2010 from cancer, on our anniversary. Little would I realize that this month of my marriage would also hold so much tragedy but at the same time was one of the happier times in my life. It's ironic to me that in 1979 the city where my Kennedy Half dollars were minted (Types 1 & 2) in the same year I was married to my best friend would soon acquire a new Chief Financial Officer, my brother-in-law Rod. These were the thoughts that were running through my head while I sipped my coffee this dreary, rainy morning. I cherish all the good memories we shared and I'm thankful to have known such a good-hearted, kind person.
In closing, I urge everyone to support responsible ownership of weapons. Being a veteran, I've witnessed the destruction that weapons of war can inflict, so I think these weapons belong on the battlefield, not America's streets. I'm a supporter of the 2nd Amendment, but at the same time, weapons, when used irresponsibly  can claim the lives of of those we love. I'm thinking a lot of people just don't realize that "fact".  My Kennedy half dollars also remind me of the union that was committed to in the year of their manufacture. Until my next blog, tell those you love that you really love them and stay SAFE, healthy and Coronavirus free!      P.S. Did I mention what a beautiful bride my best friend is?  :-))
Charlie aka slybluenote

Sorry for your heavy losses. I am sure your heart will always have fond memories.

I am truly sorry for your loses. This virus is really affecting everyone all around the world.

Thanks for the thoughts and well wishes folks! I woke up on this side of the ground, so it's evidently going to be a good day! :-) Charlie

Charlie, your Best Friend is beautiful and you are blessed to have had many fine individuals in your life. I had a friend living in Poway, CA, pass away about a week ago from Kidney Failure, she was a wonderful person and a great colleague for over 20 years working for the Navy civil service. My Uncle in Arizona also passed away at the beginning of April, he was a retired Devil Dog and the friendliest guy you would ever meet. Their deaths impacted me like the deaths of your friends and relatives have impacted you But it's often said that the people we care about always live in our hearts and I find that to be very true as I often think about family and friends who have shuffled off this Mortal Coil (Hamlet). So Chin Up my Friend and lets raise a shot of Maker's Mark to those we miss.

Thank you for sharing how coins and life often intersect in both the good times and the bad. By the way, your best friend is a beautiful bride. You have been blessed to have her as your life long friend. I married my best friend in 1982 and like you, we're still going strong!

Truly sorry about your friend Rodney Loucks. Prayers for Rodney and your cousin. Losing our friends and family is sad, and all we can do is honor their memory, by doing something in their honor and remembering them. Tell your beautiful bride that Patrick said hello, and wishes you both well.

Wow im so sorry. It was this virus. It gets to people they cant live a normal life. My God my orayers go out to you andnyour family. I told Rick Tomaska the dich will buy his Kennedys. I told him i have a dansco book with all the Kennedys. I also found 120 raw ones protected from 1964. And they look better than yours. I said i have MS 69 Prood 69. Beter then yours that look like they were in a washing machine. I have so many slabed . All high grades rick. Those 1979 type one and type two two of thebbest sets i bought. Rick never got back to me. Isaid the mint set a record that will never be beaten never will they produce that many 1964 in any coin ever again. So i told him inthink mine are also from the first day. Keep the faith thats a verybsad story my heart goes out to you . I have always respected my weapons. I know the drill.

Sorry to hear about all your losses. Stay safe brother..