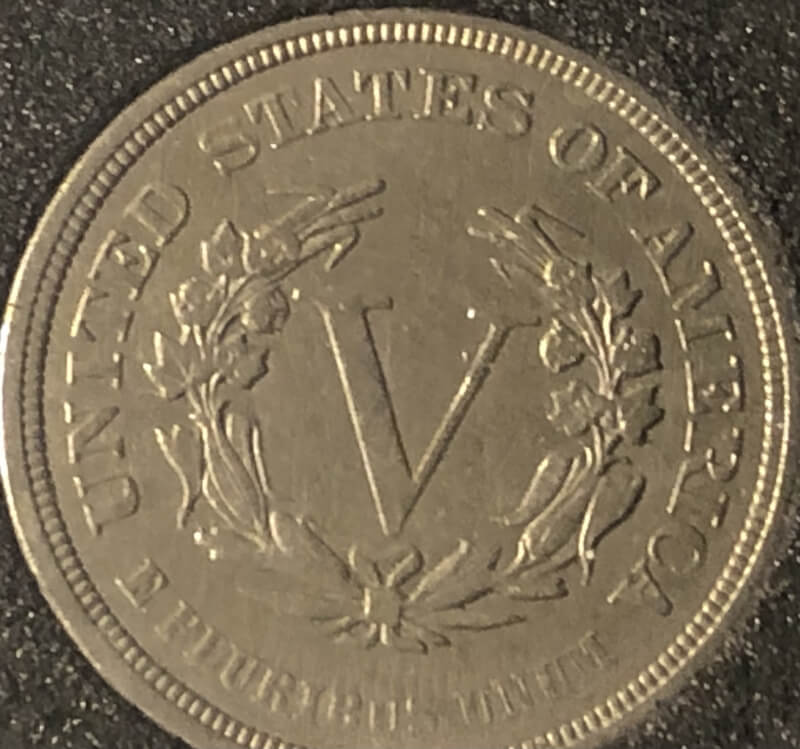 † † †To kick off my nickel collection, I‚Äôm going to start with this type-set collection. I‚Äôve already updated my collections page, which has several additions along with this set. Let‚Äôs get right to it. The Shield nickel was designed by James B. Longacre, weighs 5 grams, has a diameter of 20.5 mm, a plain edge, and is composed of .750 copper, and .250 nickel. The example below is a Variety 2, without rays between the stars and has a mintage of 28,890,500. Proof mintage is estimated at 850 to 1,100. This was the first year of the ‚ÄúWithout Rays‚ÄĚ design and has the highest mintage of all Shield nickels. Per the Complete Coin Guide ‚ÄúThe reverse design features a large numeral ‚Äú5‚ÄĚ within a circle of 13 stars. The inscriptions UNITED STATES OF AMERICA and CENTS appear surrounding, separated by two dots. When the design was initially released, rays were placed between each of the stars. In production, these rays proved problematic since they required extra pressure to flow the metal into the recesses of the design, leading to more frequent die failure. The rays would be removed from the design in early 1867 to remedy the issue, although striking issues would still persist due to the hardness of the copper-nickel composition.‚ÄĚ

† † †Next is James Earle Fraser‚Äôs beloved Buffalo nickel. It has the same dimensions as the Liberty Head. This example is a Variety 1, with the words FIVE CENTS being on Raised Ground. It as also minted at the Philadelphia, Denver, and San Francisco mints. The mintage for this coin is 30,992,000 and a Proof mintage of 1,520. The below example is not a proof coin, but it‚Äôs in pretty good shape. Right Kepi ?

† † †To complete this set, the key date 1950-D Jefferson nickel was included. This coin was designed by Felix Schlag, weighs 5 grams, has a diameter of 21.2 mm, a plain edge, and is composed of .750 copper, and .250 nickel and was minted at Philadelphia, Denver, and San Francisco. It has a mintage of 2,630,030. The ‚Äústeps‚ÄĚ on the reverse of this coin determines it‚Äôs price and if it‚Äôs scarce or not.†

† † †I own quite a few nickels, although they are of the Buffalo and Jefferson variety. Some are in slabs and some are in flips. My granny Boone left me some Buffalos without a date on them. I‚Äôve heard that this is quite normal. More research is needed on this subject. I‚Äôm not going to set a time limit on this collection due to the amount of nickels that I have in my collection. I may slab some more of them when I run across a nice example. As always, enjoy the pictures, stay safe, HEATHY, and coronavirus free. I‚Äôve also included a picture of some of ‚ÄúLife‚Äôs Lessons‚ÄĚ!†

P.S. I may not post again for a while because I still haven‚Äôt completed my assigned reading/research for this series. ††

I've been pondering a Liberty nickel series run in extra fine and better, as soon as the Eisenhower is complete. The design always appealed to me.

Great type set. I believe the reason the date wears off so fast on the Buffalo Nickels is because that is the highest point in the design, thereby it is subject to the most wear.

Those are real beauties! Nice blog

They are beautiful! Great series to collect! Have fun with it. ; )

Nicely done Charlie. You have great discipline on reading before buying. I like your poster. Reminds me of Mike Rowe's SWEAT contract. The older I get the more I like the nickel series. Thanks and good luck.

You are collecting a great set. There underrated I don't think they should be.. The type set sounds like the way to go. . I can't wait for the blog that you finished. Never give up!!

Nickels are fantastic. I like all of them. Liberty nickels have always been a favorite of mine. 1950 D I liked as a kid. Just to many of them to be valuable. Nice update and collection.