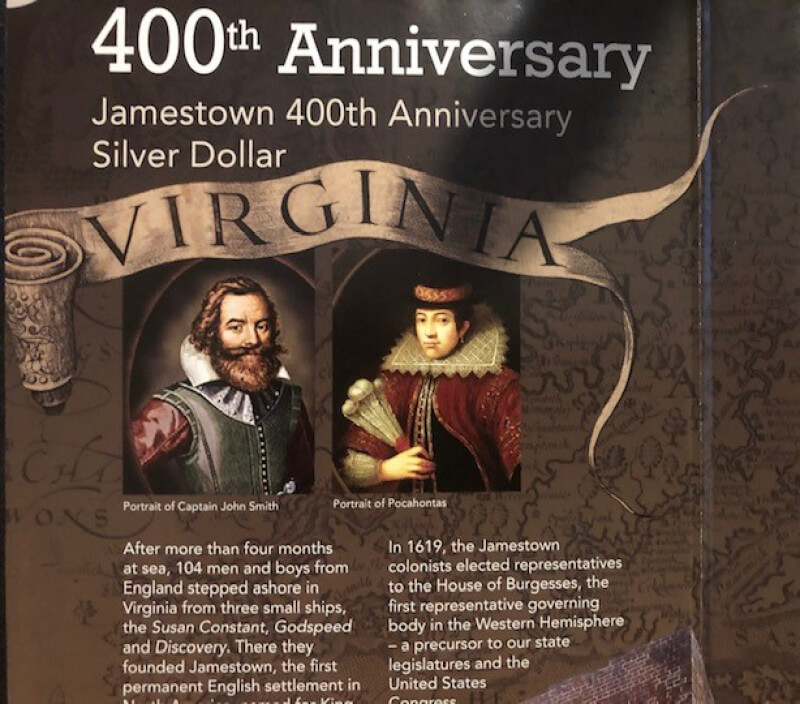 When I first started collecting mint/proof sets I discovered the American Legacy Sets. They were only made from 2005 to 2008,  there are only 4 of them which makes them easy to collect. I currently have all of them except for the 2008 which I will be ordering in a few days. Today, I would like to talk about the 2007 set. It consists of the Jamestown commemorative and the Little Rock commemorative. I really like these sets because they employ the "KISS" theory (keep it simple stupid)! This set has 16 beautifully designed coins, which were all minted at the San Francisco mint, except for the commemorative coins which were minted at Philadelphia.

The left hand side of the packaging gives a brief history of the Jamestown commemorative coin, which is a silver dollar. The short narrative lays out the events that took place at Jamestown when the first folks landed there and named the colony after King James I of England. As I'm sure most of you folks know, I learned about this in grade school along with the story of Capt. James Smith, chief Powhatan, and Pocahontas.

The right hand side of the packaging talks about the Little Rock Nine, Central High School in Little Rock, Arkansas. Naturally, it speaks about "Brown vs the Board of Education law that was passed in 1954 (the year I was born). This coin is also a silver dollar. The segregation law, Executive Order 10730 was signed by Dwight D. Eisenhower to order the kids to  attend the school. I'm surprised the mint didn't include a "Ike" dollar instead of the Sacagawea. Oh well, such is history! The mintage for the Jamestown coin is 260,363 and the designer for the obverse is Donna Weaver and Susan Gamble designed the reverse, weighs 26.73 grams, is .900 silver and .100 copper with a diameter of 38.1 mm and a reeded edge. The Little Rock commemorative was designed by Richard Masters (obverse) and Don Everhart (reverse), weighs 26.73 grams, is .900 silver, .100 copper, is 38.1 mm and also has a reeded edge. The mintage for the Little Rock coin is 124,678.

Please enjoy the pictures and stay tuned for the next part of this "American Legacy" series. As always, stay safe, HEALTHY, and coronavirus free!

Interesting and thanks for the personal images! I don't have any of the sets but I actually came across a "collection dump" of these cameo pieces in some small dollar rolls a few weeks ago, that was fun!!! They were no longer as beautiful condition as your sets though lol!

I like many of the sets the mint puts out containing a cross-section of their commemoratives with their other annual coin sets. Nice blog.

Nice blog. Sounds like you are enjoying the sets.

Charlie, your photos are getting much better each blog. Buying sets like the Legacy sets is definitely a great way to have beautiful sets in attractive packaging. Thanks for sharing your latest.

Dude, that is one sweet set! Good info with it as well, thanks, Later!

Very nice set! They sound like a very cool collection to start. Once you have the 2008, what do you plan on doing? The prestige sets? Thanks for sharing!

I started off with mint/proof sets starting with my birth year (1954) to which I'm only missing one year. I have a couple of prestige sets already, so I'm still working on those. Check out my collections on this web site.

Very nice sets and a couple low mintage on the Jamestown and Little Rock. These would make great gifts for anyone. The history on them is very interesting. Thanks for a very interesting post.

Wonderful set! Thanks for sharing as I have never heard of these. I will look into it, and will most likely be purchasing some. Catch you later!

Nice blog Charlie. You are right, that set is screaming for an Ike dollar. How could they have missed that one. Oh well, still a great collection. Thanks.

Those are some fascinating sets indeed. Combined with the Coin and Chronicle sets issued around that time it showed promise for the mint struggling to keep us collectors interested from just the simple sets offered. Which is some what disheartening that they've shifted from those towards "special" limited low mintage products. As for Jamestown, I was fortunate to have stopped there in 2007 riding my motorcycle back from Myrtle Beach Bike Week in May. I picked up the official anniversary gold medal from the gift shop.

I bought the Jamestown commemorative, being the loyal Virginian that I am and all.... Well the obverse is not historically accurate. SI was disappointed in the coin.

Great sets to learn about our history. You picked up some great ones. Can't wait till you get the rest. It's a great blog simple but and interesting. That's what I like about them. Thanks Charles!

Thanks for a cool blog about a cool set!