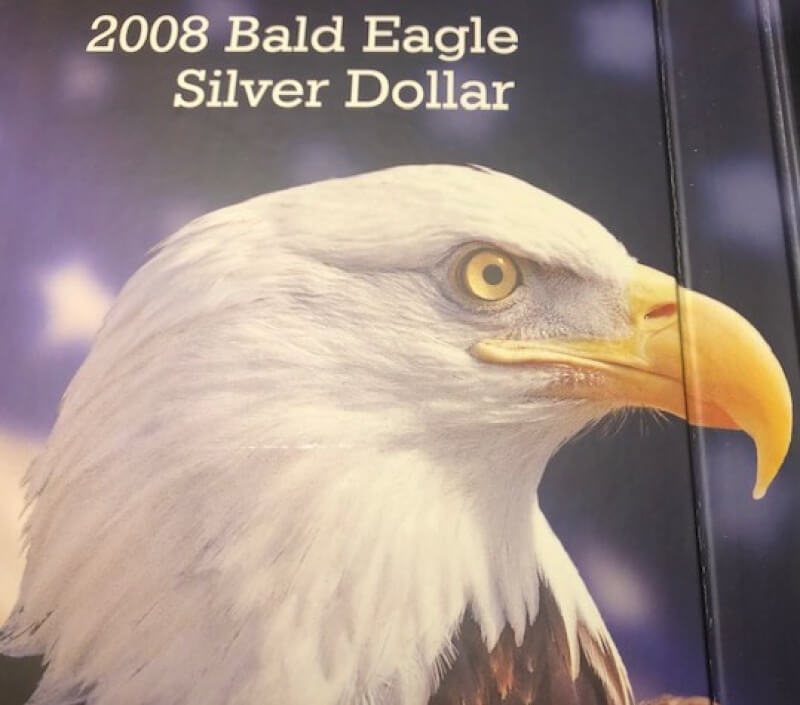 This is the final part of a 4 part series called the American Legacy sets. These sets were distributed from 2004 to 2008. Today we'll be taking a look at the 2008 set which features the Bald Eagle Recovery and National Emblem Silver Dollar. I finally received this set yesterday in the mail. This set consists of 15 coins: 1 commemorative silver dollar, 5 proof set coins, 5 state quarters, and 4 Presidential dollars all made at the San Francisco mint except for the silver dollar which was minted at Philadelphia. The mintage of the complete set is 21,194. Mr. Joel Iskowitz designed the obverse and Mr. Jim Licaretz designed the reverse. It's made of .900 silver, .100 copper, weighs 26.73 grams, is 38.1 mm in diameter, and has a reeded edge. The mintage data for the commemorative coin is 119,204 uncirculated coins and 294,601 Proof coins.

Per the Mega Red book, the bald eagle, selected in 1782 by the Second Continental Congress as the national emblem of the United States, was common at the time of the nations establishment. Through the years, however, poaching, habitat destruction, pesticides, and food-source contamination reduced the number of nesting pairs from approximately 100,000 to just more than 400 in the early 1960's. Conservationists have since saved the species over the past 5 decades. The bald eagle is unique to North America and is one of the greatest visible symbols of the spirit of freedom and democracy in the world.

I don't have a complete collection of commemorative coins, but if I spot one that I like or that has special meaning to me and I have the funds, I will purchase it. Today is such a case. As a bonus, I'll post pictures of the 2011 U.S. Army Silver Dollar. Richard Masters designed the obverse of this coin and Susan Gamble designed the reverse. This beautiful coin is made of .900 silver, .100 copper, weighs 26.73 grams, is 38.1 mm and has a reeded edge. The San Francisco mint produced the uncirculated version which I have, and Philadelphia made the proof version. The mintage for the uncirculated coin is 43,512  and the mintage for the proof version is 119,829.  As many of you are aware, I spent 14 years on active duty with the U.S. Army and another 13 years working for the Department of the Army, so this coin was a "must have" for me personally.

As usual, stay safe, HEALTHY, and coronavirus free until the next time. Until then I will press on with my Peace dollar collection, Prestige proof sets, and maybe even a "stray" oddball. Collecting coins for me is like the New York lotto, "hey, ya never know"!

Yes, this was an easy set to collect since it was only produced for 4 years. I discovered it when I started collecting the mint/proof sets and decided to add these to my "meager" collection since they were also affordable! Thanks for the kind words folks! Stay safe and HEALTHY everyone!

Legacy sets are an interesting way to package the coin. Nice blog series.

Nice set of coins. Thanks for showing us.

I bought them separate (proof set and commemoratives) but need to consider the set. Thanks!

You have some really beautiful sets! Thanks for sharing them with us! ; )

That is a huge lump of coins in one set. Good deal. Thanks Charlie..

When the bald eagle coins were first released, I bought examples of all the coins offered except for the uncirculated gold coin. The bald eagle's restoration from the brink of extinction is one of this country's greatest conservation successes. To see bald eagles in the wild is truly spectacular. About a year ago, just before COVID, I saw an eagle fly majestically from a tree near a river while eating at a restaurant in a small Wisconsin town. That eagles are now seen in unlikely places is a testament to how far they have come.

Beautiful sets!! Keep them coming, and sharing them with us! Cheers!

Thanks for sharing your coins.... I really like the reverse of the Army commemorative coin

This set contains two of my favorite designs for the Statehood Quarters. The Alaska and Hawaii designs are IMHO among the top 5 designs in the whole series. The Eagle on the 2008 is also very well rendered. Thanks for sharing, Charlie.

You really did well with your sets. They not only had many coins but good coins. These sets sold well. . You can still buy them!! That's what's great about this hobby. Look hard enough . The fun I s in the hunt.