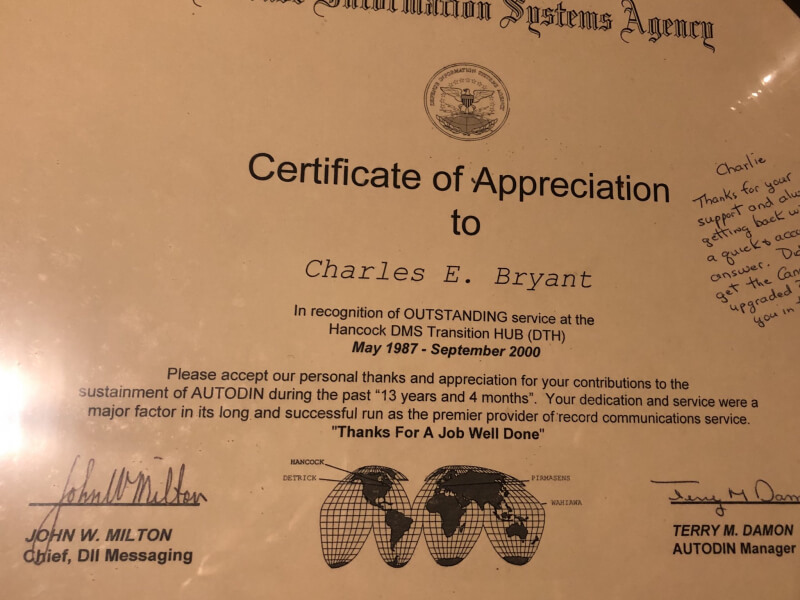 I only own 2 Medals. 1 is the First Lady medal that came with my Presidential Kennedy dollar. The other one I didn't realize that I had until I readDr.Darryl's blog. I split my government service into 2 periods. The first period I was in artillery, in which I spent 6  years. My next 21 years was spentin what I call the "Deep State"  :-)  I started this period as a 72G, Telecummunications Center Operator. I progressed through the ranks to E-5 again.I was an E-5 in the artillery also serving as a Motor Sergeant. After completing 72G school I attended an extra course called the DSSCS (Defense Special Security Communications Systems) course. While attending this school, I was visited by two gentlemen in 3 piece suits who wanted to offerme a "job". They informed me that they were from WHCCA (White House Communications Center Agency). They told me that I would be TDY (awayfrom home) 7 months out of the year. I politely declined their offer due to the fact that I was engaged and didn't want to be displaced after I was tobe married. A couple of weeks later I was visited again by two gentlemen in 3 piece suits who offered me another job. They advised me that they hadheard that I had declined the previous WHCCA job, so they had another offer. It was a position in Mons, Belgium and was a civilian assignment. I wasworking (indirectly) for Gen. Alexander Haig who was then SACEUR (Supreme Allied Commander Europe). This was before he became Chief of Staff toRonald Reagan. To make a long story short, I exited the military in 1986 but continued working for the Dept. of the Army until 2000.      Upon my departure from the Dept. of the Army, I was awarded the below certificate along with the medal. I had put them away until I recently readDr.Darryl's blog and got to thinking I may have one of those!  I exited my government service as a Tables Manager/Telecommunications Specialist, GS-9.I'm not sure what kind of metal the coin is made out of but I know that it's HEAVY and looks like maybe bronze. It's fairly thick also. Notice the picture ofthe wooden holder they gave me.  Dr.Darryl's blog got me to reminiscing when I read the one about the CIA ...LOL!  I've worked with folks from thatAgency and have good friends who have worked there. I'm proud to be a veteran and was once part of the "Deep State" ! The first picture is of me in myNEW uniform of the day. I call it my coronavirus uniform. The bottom 2 pictures are of my better half and I during my Deep State years. Until next timemy friends, stay SAFE and healthy and PLEASE help flatten the curve ! Charlie aka slybluenote

Thank's for serving this country.

Thank you for your service and the great story.

Awesome life story Charles, what a career ! Congratulations and thank you for your service. Fantastic medal ! Stay safe yourself ! Thanks for posting and sharing your story !

Great blog Charlie and great medals. It's nice to here the story behind one. Now I remember those leisure suits. thanks for your service and sacrifices.

Outstanding SBN!!!! Thank You For Your Service and thanks for sharing your wonderful certificate and medal. Just don't let Dr Darryl get a hold of it or he will blog about it in a few years and we will wonder what happened to you. (:

First and for most. Thank you for all your years of service to our country. For that we are grateful. Those are interesting medals. . Thats why i love this hobby. Anytime i sign on i never know what beautiful medal or coin im going to see. Just like this morning. Thank you again . I would hold on to that mabey put it in an air tite . Great story of your service. I wish there were more of people like you. People.in service.