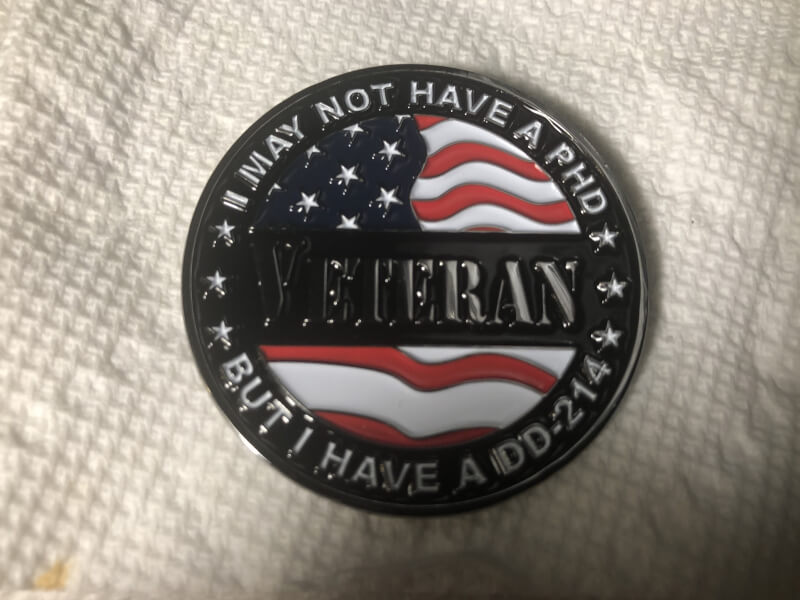 As promised, I want to share my veterans medal/coin that I recently purchased. I have performed a small amount  of research on this subject, but haven't done a really deep dive. As I stated in my 11 April 2020 blog, at the time I only had 2 medals/coins. Now I have a total of 3. The first lady medal/coin that came with my JFK presidential dollar, my coin from the Defense Information Systems Agency and now my veteran coin.

Being a veteran, I support a couple of groups that support veterans. The store where I purchased this coin is owned/run by veterans. It's called  https://www.vetfriends.com/ . I also support wounded warriors and IAVA due to the nature of their mission (https://iava.org/). I know there are some of you folks on here that are also veterans and will be familiar with these groups. I also support our local VVA and their organization that's named "ClearPath" that's run out of the VA Hospital here in the area.

To give you a brief summary about challenge coins, here is an excerpt from medalsofAmerica.com : "One particular story dates military challenge coins back to World War I (1914-1918) and a wealthy military officer who had bronze medallions struck with his flying squadron insignia stamped on them. He presented the coins to each member of the squadron before they departed on missions over Europe. One day, a pilot was shot down over Germany and later captured by German soldiers and held captive as a prisoner of war. He was stripped of all personal belongings and identification by the Germans and only had his personal clothing and a small leather pouch that contained a squadron coin inside. The pilot eventually escaped his German captors and made his way back to France. The French, who retained him, thought he was a spy. Upon discovery of the squadron medallion, he was recognized as an American and later returned to his unit. The coin saved his life and earned him the recognition as an American Soldier. "

Since I'm a Viet Nam era vet and have trained with the 10th Special Forces Group out of Bad Tolez, Germany, here is another excerpt from the medalsofAmerica.com: "The United States of Americaās entrance into the Vietnam War (1956-1975) first consisted of U.S. special operations forces working with the Central Intelligence Agency (CIA) conducting clandestine operations against the North Vietnamese Army and Viet Cong. The nature of the military clandestine mission was such that the actions of many American special operations Soldiers were not recognized overtly by the United States Army with medals and ribbons. The 1st Special Forces Group (Airborne) participated in many of these clandestine missions over the years in Southeast Asia with little to no fanfare.

As legend has it, the Commander and Sergeant Major of the 1st Special Forces Group (Airborne), in order to properly recognize their men, designed a military challenge coin to present to them. On the front was the unitās name, a beret flash with the numeral one in the top right and a sword pointing up, signifying the unit was ready for combat, and an eagle on top spreading its wings. On the reverse side, was the Special Forces motto āDe Oppresso Liber,ā the traditional green beret, a bayonet and scroll and a blank space to enumerate the coin for prosperity. The command kept a detailed registry to record the name, date and mission of each recipient. The 1st Special Forces Group (Airborne) coin was a way for the command to formally recognize their men and their accomplishments when formal acknowledgment by the Army was openly frowned upon.

The story of the 1st Special Forces Group (Airborne) presenting coins to men in secrecy deep in the jungles of Southwest Asia is a story of legendary proportions. The dark, shadowy nature of the special operations forces coupled with the CIA only adds to the mythological nature regarding the historical origins of military challenge coins.

Today, the 1st Special Forces Group (Airborne) retains the original design it had during the Vietnam War, and it continues to conduct missions throughout Asia as part of its heritage. The coin is legendary, as its own history within special operations lore only adds mythological proportions as to the true origins of military challenge coins. The tradition continues then and now. "

In conclusion, enjoy the pictures, and until next time stay safe, HEALTHY, and coronavirus free! Talk to everyone again soon!

They represent men and women of great honor and respect for their service. Thanks for yours and for sharing.

Awesome blog Charlie. Thanks to all who have served or are serving. Not to come anywhere near your Challenge Coins, I am collecting Vietnam era MPC's. Funny, I was at a place and talking to ag uy yesterday and I mentioned Challenge coins. He pulled out his, Rangers. Thanks Charlie.

I want to thank everyone for their support for our country and the brave men and women who protect it! It makes me sad to hear that today's supposedly Commander-In-Chief has referred to dead veterans as suckers and losers! I personally am neither one and neither are the ones who gave their life in service of this country. "All gave some, some gave all !"

Yup, my first TDY to Bad Tolez was in 85. When I was initially assigned as a member of my first Special Operations Unit we were issued numbered coins, back then the only way to get one was to be presented with one by the Commander and/or First Shirt. Similar to what you Navy folks would call a "Plank Owner". Over the years I was a part of three different Spec Ops Units as well as a short tour at a Ground Launched Cruise Missile Base, GLCM, (Nukes) and have coins for all. I cherish them all, as I know you do yours. Thanks for the Blog, Later!

Thanks for your service!!! Cool background on this one. Very nice. Regards Doug

Beautiful medals, and an amazing story to go along with them! Thank you for your service, good sir! I hope to one day be able to serve as well.

Thank you for your service sir. I have a soft spot for challenge coins. I didn't serve but my wife did.

Thanks for serving and for the informative blog.

Great area to collect. Military medals and related material is a nice area. The wife and I just played in a golf tournament for Folds of Honor. Folds of Honor help chikdren of veterans with scholarships for college. We also participate in Wreaths across America. Thank you Veterans!

Thank you for your service! I think these challenge coins area bit like numismatic dog tags. One of the first things I got when I started to collect coins was my dad's medal from his time in the service.

Great coins and thanks to all you guys who served. Thanks you for your service, sirs.

Very Cool Charlie, I received a few challenge coins during my time with the Navy but I gave most of them to a work friend who had a massive display of challenge coins in his office my favorite one was the one I received from the On-Site Inspection Agency when we finished up the physical inspection part of the INF Treaty. Those INF years were the most exciting and rewarding of my career. Thanks for reminding me what great work our DOD does around the world.

I lost two good friends in that war. I was a student of the ministry so I couldn't go . Never forget them. Those medals are always made with class. I like them. So are very sharp in apperance. I like the other ones also the challenge coins. You don't have it you buy. But through history these medals are well made and eye catching. . Thanks for your always good blogs. And remember those who never came home and thank the ones who did. Thanks Charlie.