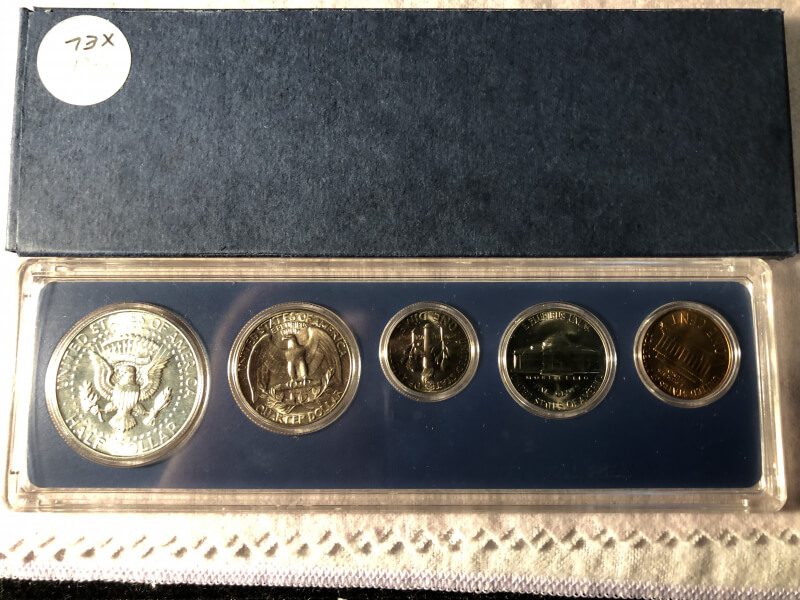 It's another beautiful day here in Central New York. It's also a GREAT day because I woke up on this side of the ground! And then I think to myself, I have to wash my mask today. I'm really not sure how much I'm liking this "new normal". This past week I received the 1965, 1966, and 1967 Special Mint sets in the mail. Like Mokie, I really like my "mail person". Not only does she deliver my mail, she's very nice to me even though she's married. She doesn't like wearing her mask either, but that's okay with me.

While waiting to obtain my last Kennedy Half, if you haven't noticed, I've blogged several times about Proof Sets. It's going to be my next collection, but I've decided to collect them a little bit differently. I'm only going to collect them from my birth year going forward. Some of the earlier years are substantially costly and very scarce. Of course if I have the opportunity to obtain one at a "reasonable price", I will do so. I made this decision after doing some research in the Mega Red and the Guide Book of Modern United States Proof Coin Sets which was written by Mr. David Lange. You know what they say, "buy the book before the coin"! Special Mint Sets, SMS's, were issued for the years 1965, 1966, and 1967 and were all minted by the San Francisco Mint. Mr. Lange also points out that there are 2,360,000 complete sets possible for the 1965, 2,261,583 complete sets possible for the 1966, and 1,863,344 complete sets possible for 1967.

Mr. Lange also talks about the reasoning for not issuing the normal proof sets for these years and the difference in packaging. The Treasury department is no different than the rest of the government institutions. Sometimes they just don't get things right, as in the coin shortage for these years. The packaging change in 1966 to the cardboard box and hard plastic holders was a needed change also. These sets are inexpensive to purchase, but the cost goes up due to the grading of the coins. Mr. Lange indicates in his complete sets possible numbers that the figures are for proof 66, proof 66 cameo and proof 66 ultra cameo. I'm fairly sure that my sets don't meet ANY of those requirements...  :-)

Please enjoy the pictures of my latest addition to my Proof Set Collection, and as always, stay safe, HEALTHY, and coronavirus free!

Mint Sets are a buyers dream. You can shop Brick & Mortar, e-bay, many other different internet sites. The variance in price is astounding. As my Grandfather would say "They really love that set", some are overpriced, many slightly overpriced, some priced about right and occasionally, you can find one underpriced, or as I say "Just Right". I am astounded how many are up for sale without the original packaging. I'm not sure about y'all, but this old boy ain't buying anything without the original packaging. Anywho, I enjoyed seeing the pictures of your SMS. Now, and I can hear my wife snorting in the other room, when I say "I gotta get me a set". Thanks again!

Great coins, that's how it should be with everyone however not everyone is so nice. Just goes to show you there are still good people in this world.

There are so many different finishes to collect which is what makes it so interesting. Thanks for sharing your story and your collection photos.

Nice sets and coins. Being married, i dont see myself hooking up with the mail woman. Why would I want to disappoint two women !!!! Thanks for the update on your collection. Enjoy reading what your up to.

I personally like this finish better than the proofs going forward after this. I love a nice cameo, and this looks more like a finished coin rather than a mirror

Thanks for the tip Bama! And thanks everyone else for taking the time to read my blog! Talk to everyone again soon, as I will be previewing the 1909 Lincoln cent with (VDB) on the reverse that I recently purchased.

Charlie, you are making remarkable strides in your collecting endeavours. Keep on sweet-talking that Mail Lady, you want to makes sure everything comes through without a hitch. In my retirement, I am using National Association of Letter Carriers health insurance so they like me. (:

LOL Mokie ! I've already told her to take back ANYTHING addressed to "MRS." Bryant ! :-)) There's usually a bill attached to anything addressed to my Best Friend and it's usually from Amazon! LOL The mail lady told me one day that she loved the smell of my sunscreen! I think I'm in pretty tight with her. LOL

Nice looking sets Charlie. I like your plan for the future. My birth year is '58. Right where they get expensive. Good luck..

My oldest cousin was also born in January 58, I was born in February 58.

The same year as my sister Longstrider! She was born in Jan. 58!

Nice! Coincidentally, the year I was born.

What a great set you are putting together Charlie! Hey, another place to check prices is PCGS on line at PCGS,com. Those are retail prices they list. They also have an app you can get for your phone. NCG does too. Very helpful and more current than what you are looking at.

First the mask is to protect your self.from someone who might be a carrier. It's sad while N.Y is doing great some states the hospitals are still full. They were great sets. I had mine graded I knew they would grade great. MS 67. That's great for these. I think there underrated. People look at them as a fill in. Not so. They stand on there own merit. Nice pick up. Enjoy them.

Nice Coins. I wish I knew my mail person better.