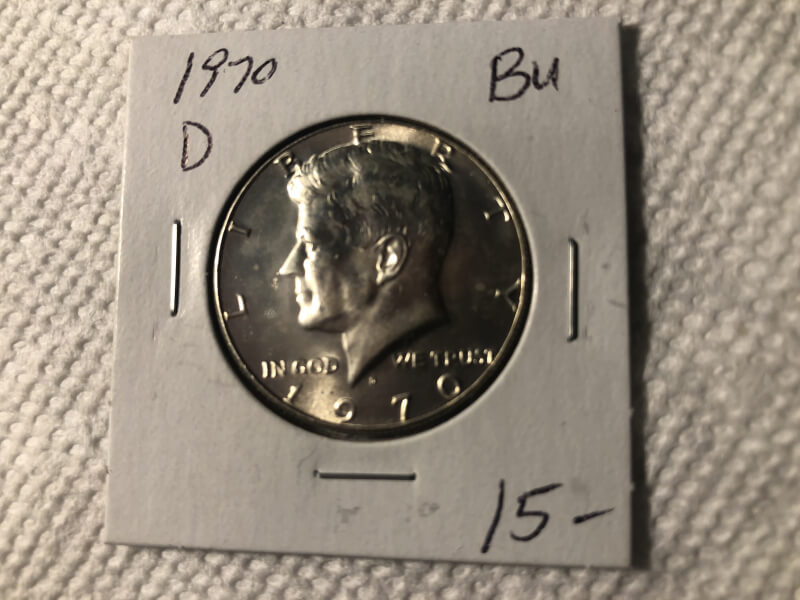 I know that I posted an earlier blog about grading. The struggle continues. I'm thinking this home schooling isn't working out. Grading coins shouldn't be this hard. I picked up this 1970-D Kennedy half dollar from my local coin dealer. As always, I'm looking around in the cases while Mark gets the book with the Kennedys in it. I also think that if you're a good dealer, you certainly know your customers. After I had searched the book for the years that I needed, I saw this coin on display by its self, separate from the book. It immediately caught my eye because it was a nice looking coin for the price that was on the flip. I thought to myself that this may be a prime candidate for a grading exercise to sharpen my skills. I'm considering making a check list for when I grade coins. I made a couple of errors on this attempt at grading. Number one, I should have weighed it in. Like a fighter before a fight. Number two, I should have did more research on how to identify a clean/altered coin.

I graded this coin after a couple of days of studying it. I gave it a grade of AU-55 for several different reasons. There were a couple of light scratches in the field right around his nose. There was also what appeared to be a milk spot right under the Y in the word liberty. Also, right above the 9 in the date there's a couple of small pits. The light scratches I thin k are bag marks, no biggie. The reverse is in great shape. Nothing noticeable anywhere. There is really nice luster on this coin, which is another reason that I bought it. After several consultations with the ANA Grading Standards for U.S. coins book and A Guide Book of Franklin & Kennedy Half Dollars, Third Edition, by Rick Tomaska, I arrived at the AU-55 grade. Even after a couple of days of examining this coin, something still seemed odd to me. It has a reeded edge and it all appeared to be silver. Now I know that the composition is supposed to be 40% silver and 60% copper. When I didn't see the copper color, red flags went up in my head. This is when I should have weighed the coin. Hindsight is 20 20 though, right? It's been quite a few years since 1970 and I got to thinking, how did this coin retain it's luster? This is what leads me to believe this coin has been dipped. The more I looked at it the more that I was convinced. This is where I should know how to identify a clean/altered coin!

All in all, I still really like this 1970-D for a couple of reasons. As stated in https://kennedyhalfdollars.net/1970-d-kennedy-half-dollar/  the mintage for this piece is 2,150,000. I also know that this is a key date for Kennedy Half dollars. Another important aspect for this year according to this article is "Any 1970-D Kennedy Half Dollars graded MS65 or higher by the major grading services are scarce and command a premium. Examples graded MS67 by PCGS and NGC are extremely rare and have sold for four figure prices."  I also have another one that is in my collection, but I like this one just as good as the one I already have.  Another thing that I considered when grading this coin, again from the article "Since all examples of the coin were issued within Mint Sets, it might be assumed that higher grade examples of the coin are plentiful, however, this is not the case. Most examples will be found with bag marks or light abrasions which will keep them below the gem level."

To sum things up, I can honestly say that this grading exercise just gave me the "BLUES"  :-)) Until next time stay safe, HEALTHY, and coronavirus free! As always, comments, tips, and recommendations are welcome, because as the title states, I'm still on the learning curve!!

It is interesting to me that of the 6000+ 1970-D Kennedy Half Dollars NGC has graded, 100 of them are details graded and most likely cleaned. Also interesting to note is that there are a handful of PL and DPL Kenedy Half Dollars certified. When I went shopping for a 1970-D for my 20th Century typeset, I bought several halves that were still in their cellophane packaging. One way to ensure they haven't been cleaned is to purchase them in their original packaging. Like you said these are extremely rare in MS-67. I picked what I thought was the best looking coin of the lot and sent it to be graded. It came back as MS-65. I ended up trading and selling the rest.

WOW, that's interesting information Gary ! Thanks for posting. I also own a couple of graded Kennedy half dollars, but they aren't of the 1970-D variety. One from NGC and the other from PCGS. I often use them to compare to other Kennedys in my collection and for grading purposes.

one thing to note (learned this in an ANA E-Class thingy) is that dipping a coin will not reproduce luster, nor will any type of coin doctoring. As Moke pointed out, a coin needs wear to be an AU. if it doesn't, than this coin is probably somewhere 60-62 (likely more 60, 61 ish). Also, I recomend having a ANA photograde book handy, especially when first adjusting to grading a new/ different series

$20 on Amazon, for a brand new one. You can probably by a used one on ebay for less.

Thanks for the info Liberty ! How much do those ANA Photograde books usually cost?

Recently I gave myself an exercise to do. I covered up the grades and graded them myself. There were two I took to my favored coin dealer because I had questions about why I thought one grade and the grading service had a slightly different one. One of them was a 2 cent coin that was marked cleaned by the grading service. I couldn't tell how it had been cleaned as I didn't see any abrasions at all on the coin. It was an AU58. Nice coin. The dealer who has been doing this well over 40 years couldn't either. Go figure. I have lots to learn about this aspect of numismatics.

Coins with milk spots and baggy scratches and even a cleaning can still be MS (maybe details) and since that coin was originally issued in mint packaging, it may not have ever circulated. There is a possibility of mishandling over the 50 years since it was issued by all the different owners. You don't mention any wear in your assessment, early wear areas would be seen on Kennedy's cheek and on the tail feathers on the reverse. Can you comment on what you see in those locations?

Hi Moke, this coin wasn't in OGP, it was in a flip. I got it for $15. There's a couple of bag scratches on the jaw area, and what looks like a milk spot below the Y in LIBERTY. Also above the 9 in the date there's what looks like 3 small pits in the field. The tail feathers on the reverse show slight wear, but nothing that's too bad. The scratches in front of his nose and the small pits above the 9 is why I graded it a AU-55, cleaned coin. Also, like I mentioned, I couldn't see any copper on the edge. Thanks for the help buddy!

I want to thank everyone for their responses ! In my humble opinion, knowledge is power. All comments are greatly appreciated. Stay safe and healthy during these trying times! Charlie aka slybluenote

I bought 10 1970-D Kennedy halfs years ago because the mintage was low. Still have them today in original mint packaging. I would not really know how to determine a cleaned coin though. I can look at coins and think they are cleaned , but dont know the specifics. I usually buy graded coins only now, unless its a low value coin that I trust or believe it isn't cleaned.

Roger that Golfer ! That's my problem also ! I could very easily be taken to the cleaners with a "cleaned coin" myself. I've watched a video on Youtube and read a couple of articles but still wouldn't know for sure if a coin had been cleaned. Glad to hear I'm not alone in this regard!

Definitely a learning process. I graded 35 Washington quarters from the 40's today. They weren't very high grade except for two what I thought was AU 50. Most were good to fine, and a couple extra fine. I graded one standing liberty at good 4. Took quite a lot of looking to figure out it was a 1924 S. Only the 4 and the S were visible. I'm using the Official ANA Grading standards 7th edition. The illustrations along with grade descriptions for each coin are very helpful to the less experienced grader.

NNot bad. You did catch it. Another million coins and you will be on your way. Kinda tough with no shows to go see and pick up graded coins..Good luck. never give up.

Very nice coin! I have never had experience collecting Kennedyâ€™s; Iâ€™m only collect some for silver content. Like you, Iâ€™m still on the learning curve. Iâ€™ve seen several mention the ANA Grading Standards for U.S. Coins book as a reference to learn how to grade. I think Iâ€™ll have to invest in that one. Happy hobby-ing and stay safe, my friend!

Hi . This is one of the Kennedy's every Kennedy collector should have. Last of the silver coins. Now I remember a story true someone asked the writer of the red book. How long does it take to become a good grader. He replied a good loop. A good lighting source and ten years of expierance. I have done all that . I'm at 94%. That's pretty good. It's the hardest thing I learned in this hobby. It took the first two years to start getting some right. The last sheet of the submission form is ours. I would right the grade I believed it would be. Now you can get the grades in line as soon as they shipped. I had a rep call me and she would ask do you want to know your grades I said let me tell you. I was right three out of five! I was on my way. As the years went by i studied harder. To about a few years ago I got it right. I had a system and it worked after years of trying. I told this to let you know.There are things we don't know about. Can anyone tell me a problem with the Planchett? They have them but we don't have the equipment they have. Lots of luck I know you will make it. Don't give up.