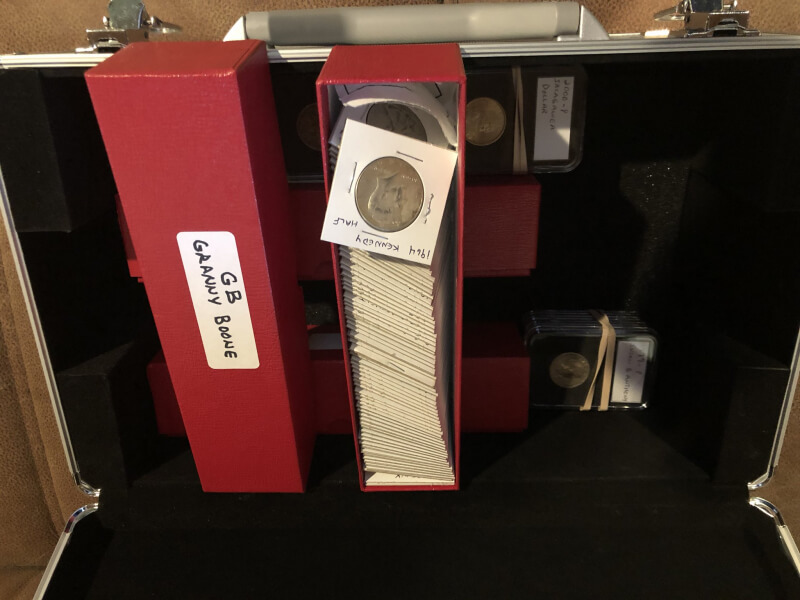 Ā Ā ĀWhen I was young and had just finished college in 2010, they called me an "Alternative Student". I personally looked at myself as "39 and holding" eventhough I was only 8 (in dog years)!Ā :-) As far as numismatics was concerned, I had all my Junk money in a box and the coins that my granny and step-fatherhad left me were in plastic sandwich bags. I had my collection appraised one time back in the 90's and was told I had about $700 , but it was all in the silver coins that I had i.e. silver melt. Of course this was before I started collecting "seriously" and doing the proper research. In Dec. 2019 I decided to start a storage system. I had never cleaned my coins so after I found out that you were NOT supposed to clean them, I thought to myself, this is good news! One less task to preserving my collection. I like a shiny new coin as good as the next guy but old coins have their own particular beauty as well. Since I was looking at affordability as well as something that would accomplish the mission, I chose the cardboard flips for the majority of the silver coins and slabs for my Kennedy Half Collection.
Ā Ā ĀI purchased the silver box for my silver coins. I do have a few SusanBAnthony's and Sacagawea's in there as well. See the pictures with this blog. I was reading a blog in the forums and there were a couple of comments on "staples". I'm no scientist, but being in a 174MM Artillery Battalion, I do know RUST! For me, this was a case of "monkey see, monkey do". If I keep the cardboard flips dry and stored properly, they will still be silver long after I'm outta here ! Since I was going to be aggressive about my Kennedy Half Collection, I chose to slab them and house them in boxes inside a briefcase. See the pictures with this blog. I know this process is more expensive, but I'm going by what I learned in the military, and that is if you want to keep something nice, you have to pay the price!Ā
Ā Ā ĀThe red book that you see with this blog is what I call "Gracie's Coin Journal". Gracie is my daughter. Even though she's now 20, still a "babe in the woods", I want her to know the process of collecting and maintaining a collection. My sister gave me the idea when I was talking to her on the phone one day. So now when I purchase a coin/coins I make an entry into the journal so that one day when the collection is hers she will know about it and the history behind it. It will be my parting gift to her. Right now, she's not interested one bit about numismatics and that's ok with me. She will be older one day and have something nice to pass on to future generations!Ā
Ā Ā In closing, did I mention I also do windows, laundry, dusting as well as vacuuming, dishes and cleaning? Being retired has it advantages and disadvantages I guess ! Until next time my friends, stay SAFE, healthy and Coronavirus FREE !Ā Charlie aka slybluenote

My collection of coins are in Air-tite ring holders and in 2" or thicker binders. Another collection of dime and quarter savers are vacuum sealed (a food sealer) and in the same. Why? Because I'm a smoker. Smoking my Churchwarden as I type, not several feet away. You should see the toning tobacco smoke creates on silver left in cardboard flips. Not as bad as one might think.

Aren't "slabs" supposed to be "air tight" Long Beard ? Just wondering, and thanks for the post ! Charlie

I find collectors sometimes fuss over storage for their coins almost as much as they fuss over the coins themselves, myself included. It makes a nice sidebar to collecting. After security, fire and water proofing, organization is everything.

Couldn't have said it better myself Well worn Copper ! Thanks for the post ! Charlie

I've taken the time during this "work from home" period to organize and inventory my collection. I'm about half way done. I used to use those quick slabs but I got tired of making the labels.

Yes, WCN, I agree making the labels is a pain for sure. I do it anyway to make my collection look uniform. I also have spare time now and use a lot of it on here and for maintenance ! Thanks for the post ! Charlie

Great looking collection. Well done Charlie. I think as long as the staples are far enough and do not touch the coins, they will be OK as long as we are around. It's a chemical thing so keep an eye on them. Good idea on your daughter. I'm in the same boat, no family interested. All your collecting supplies are on eBay and places like Amos Advantage and Wizard Coin Supply. All over the place. I think even Hobby Lobby has stuff. Till next time brother. Thanks, John­¤ÉŹ

Yes, I get my slabs from Wizard. Is Amos Advantage online? Just wondering, and thanks for the tips John ! Charlie

I recently put my coins were they belong!. My sets are in the original goverment packaging .There stored in a plastic storge bins then sealed. Never had a problem. Raw and important coins are in a safe. Books sealed in bubble plastic. And i have many slabs in Amos metal boxes and foam in side. No.scratches.

You have a very well organized collection. Incidentally, I have had stapled 2X2s for years without experiencing any rust problems, I think if you keep your coins in a reasonably normal environment, the staples will be fine. Having said that, there are 2X2s that are self-gluing that also work well, my particular brand is SUPERSAFE and they come in boxes of 50.

Where do you purchase those Malcolm? Are they the same price as the regular cardboard ones ?

Nice story. I love the silver case. Being organized with your coins is important. I need to work on mine. I need to list all my stuff better, so I know what I have. Thanks for sharing.

Sounds like you are organized. I also, write down all purchases in a journal.