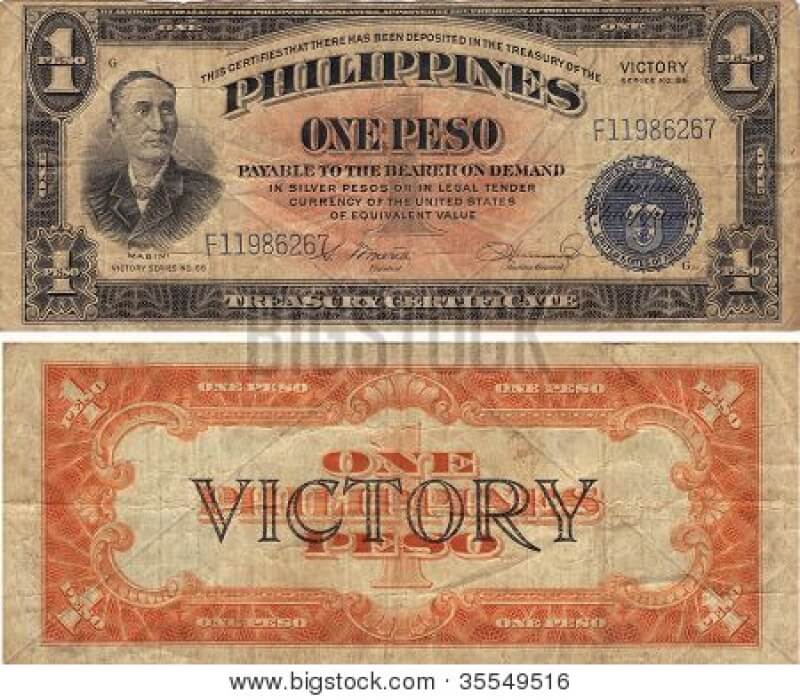 In 1942 the first pesos were printed. The philippine republic under the president outlawed possession of guerrilla currency anyone with guerrilla notes  could be arrested or even executed. The reason for the banning of the guerrilla currency is because it had a fiat nature. This means it is a currency without value establishing as $, enforced by the gov. The pesos were reprinted in 1944. It is called the Victory series #66. The reason it has #66 at the end of it is because that was President Quezon's age when he died just after to the liberation of the Philippines. President Quezon was the 2nd president of the Philippians. The reason the victory notes are partially american is because the US took control over the Philippians in the early 1900s VICTORY notes were printed at the U.S. BUREAU of Engraving and Printing it was the last Philippine currency printed by the US. The victory notes were to be used until the return of MacArthur(General of the Philippine army from America)

In the beginning there was fight and the fight became a war. Now one very important thing you need to know is that America took over the Philippians in the 1800s. There was a war in the Philippines during World War II the Japanese were trying to take over the Capital Manila. Since Hawaii and the Philippeans were attacked by the Japanese the American and Philippine armies joined together with McArthur as their general. In the beginning of the war there was another bombing and McArthur lost his Air Force because of this McArthur ordered all naval forces to leave the islands so they wouldn’t die. Although without the naval force and the air force they weren’t left with as many people. They continues to fight though. Even after all their effort they ran out of ammunition and were forced to surrender. McArthur left after that because of orders and the rest of the army was taken captive.

The Philippine people started a group among the Philippeans to resist the Japanese. It was an underground organization. This guerrilla activity ultimately spread across the islands until more than 260,000 men were active in guerrilla operations. The guerrilla were eventually attached to McAurthur. The guerrilla currency began being used in banks and local governments. Although the guerrilla currency was outlawed, anyone with them could be arrested or even executed! Between the  U.S. and Philippine military forces and guerrilla units continued printing Philippine pesos, so that, from October 1944 to September 1945, all earlier issues except for the emergency guerrilla notes were considered illegal and were no longer legal. So the guerrilla was the start of the emergency currency but the VICTORY note wasn’t printed until 1944. After the War the Government had to decide which guerrilla notes would be redeemed. A period of four months was allowed for the exchange of guerrilla money for post-war Philippine Commonwealth notes.

In 1944 the United States Bureau of Engraving and Printing began to re-issue its pre-war Philippine currency for general circulation, only this time the notes were called “VICTORY series No. 66” on the obverse side there was a large black overprint with the single word “VICTORY”. Denominations were 1, 2, 5, 10, 20, 50, 100 and 500 pesos. As previously promised, full independence was granted to the Philippines by the United States on July 4, 1946.

Really great blog and photo! Thank you for writing about an interesting part of history. Enjoyed it!

I learned something new. Plus, the comments added to the story. Nice Blog

The best part of the story was the coinage made at Denver and San Francisco. The ten centavos reverse and all of the coinage was brought to get the Philippines back on there feet. Well the ten centavos made at Denver had a DD on the mint mark on the reverse. However unknown to many the reverse also had a Doubled Die worse than the 55 cent. One just sold a month ago for four thousand dollars at Heritage House. There maybe some out there but they are not to be found. The gentleman who sold his was in contact with me he wanted to by my six. Bought two rolls one fine MS 67. The second roll reverse all doubled die four graded MS 67 one 66. The others I haven't sent in yet. The worker at the retailer never checked them or I wouldn't of received them. Luck. You never know what your buying. All great comments thank you. Mike

Oh, and on the paper side of the Philippine treasury the serial numbers of the currency on hand were recorded and subsequently burned to prevent capture by the Japanese.

There is also a lot of history on the coin side of the aisle in the Philippines. Just before MacArthur was forced off the Philippines a large cache of silver and gold bullion and thousands of silver coins valued at more than eight million dollars were dumped in Manila Bay. Still some of gold and silver from the Philippine treasury before the fall of Corregidor made it to San Francisco onboard the submarine USS Trout . It seems that the USS Trout delivered war supplies to Corregidor and took on gold bullion for needed ballast on the return trip! http://www.positivelyfilipino.com/magazine/the-lost-treasure-of-corregidor

Great piece of currency with a good history. I've never seen one.