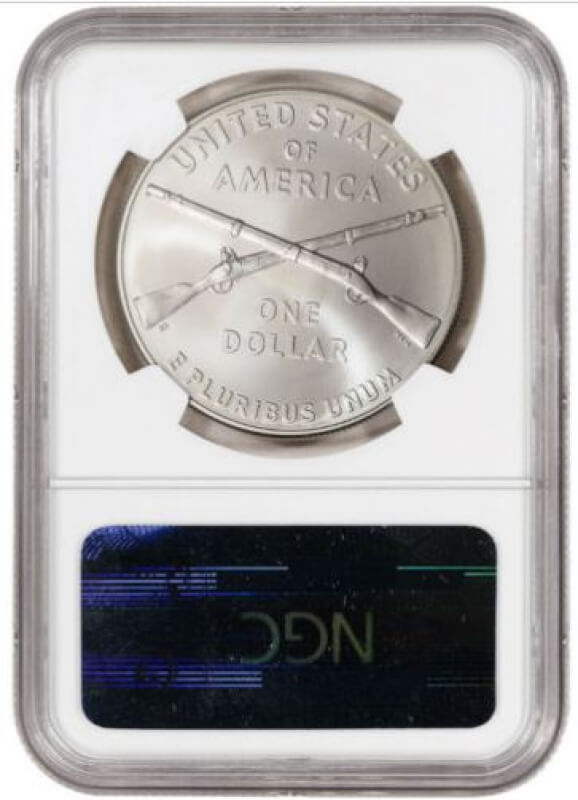 A couple of commemorative coins in my collection pays tribute to my Dad.   He would had been 100 years old this month.  He was in the U.S. Army Infantry during World War II.  He was sent to North Africa where  he was wounded in the Battle of Kasserine Pass of  the Atlas Mountains in west central Tunisia in February 1943.  The battle was the first major battle between the United States and the Axis Powers in northern Africa.  The inexperienced and poorly led American were pushed back about 50 miles. Weeks later the Americans and British regrouped and were able to take the pass.  My Dad had shrapnel in his body from this battle the rest of his life.

American Veterans Disabled for Life Silver Dollar was struck at the West Point mint in 2010.  The commemorative dollar honors members of the United States Armed Forces who made personal sacrifices for the defense of the country. On the reverse, surrounded by  a laurel wreath is the inscription. "Take The Moment To Honor Our Disabled Defenders of Freedom."

Infantry Soldier Silver Dollar was struck at the West Point mint in 2012.  This coin recognizes the history and crucial role of the United States Infantry.

Great coin with family history to go along with it. The US paid back all WW2 debt in 1962.

A great way to cherish your memory. Both of my great-grandfathers and many uncles were in these terrible wars to save humanity from socialism, marxism and communism.

What a great tribute to your Dad. The commemoratives are really beautiful. Thanks for a great blog!

Thanks for the post. As a 100% Disabled Vet I am happy to see the coins and all the positive comments. It is one of the very few ways that Disabled Vets are acknowledged. Guess I better get some for my collection.

Thanks for sharing! I can't imagine how things might be today hadn't men such as your dad fought so courageously. My dad served in the Navy during the Korean War.

Fantastic tribute to your dad and all our dads and moms that served. My dad was in Italy. Maybe they saw each other. Kinda close. He was Army Air Corps. I believe I need to look for these two coins. Thanks SUN!

I thank your dad for his service. A fair way to pay tribute to a late loved one, but it never seems like you can fully tribute them. I wonder if the Wounded Warriors PRoject got any money from this coin program.

Both my Dad and my Grandfather fought in World War II, one for the Allies and one for the Axis. Despite their different experiences, they got along well when my Dad married my Mom. My Dad earned a purple heart during the war, my Grandfather was a British-held POW after the war. All our veteran's both wounded in body or in mind deserve our utmost respect and admiration.

Great commemoratives, I can see the sentimental value on them to you far surpassing it's numismatic value. later

Great story about your dad. Those stories are so emotional. To find coins that remind you of him is great. Memories. They never leave us. Those are great coins . I have one I now have to search for the 2012. Thanks for the post. And the coins. I enjoyed it very much.

Great coin, awesome blog! This coin is #2 on my list of wants. I had a dad in the Army Air Corps, two Uncles in the Navy, , one Uncle a Marine, and two more in the Army during WWII so I've always been interested in this coin. I highly recommend the book by Rick Atkinson, An Army at Dawn, it covers the US Army's campaigns in North Africa from the invasion to the surrender of the German Desert Corps, first under Field Marshall Erwin Rommel then his successor. Great way to honor & remember your Dad.

Thanks for the book suggestion.

That's a wonderful commorative! You guys have Fathers who were heros... While they are at it, I'd like to see a George Patton commemorative

My father is still with me and last year I bought him the three coin American Legion set and one ounce medal. I so wish that you had the same opportunity, yet I am certain he would approve of the remembrance. Enjoyed that blog.

Great remembrance of your dad. Those are two great commemoratives. A great way to honor our military. Thanks for posting.