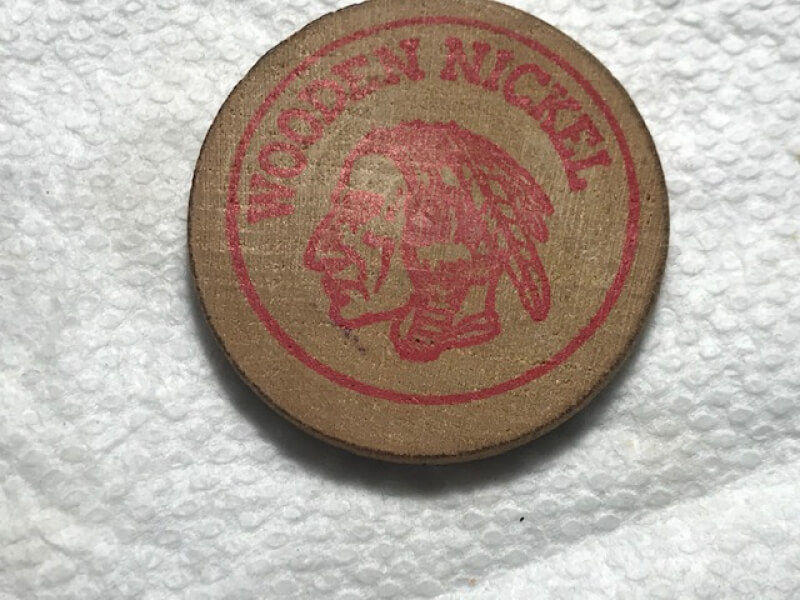 It was  a long weekend.

It was literally freezing outside.  It was one of those days where you took notice of "Wind Chill."

It would not stop snowing.  It still hasn't stopped.

I was desperate for something to do.  Then I saw it.  My daughter's piggy bank.

I don't like to admit this, but what else could I do, I had no rolls left to search.

It is not as bad as it seems.  My daughter is 38 years old.  She is married with two kids of her own.  She lives with her husband on the North side of Chicago, and we are on the South side.  It was like an invitation.

And, now you are going to hear the story.  I should really say I'm going to show you the story.

Spoiler Alert-I'm still not rich, except, I'm rich with my friends in the ANA.

The first find was a 1967 Silver-Clad Kennedy Half.  A good start, even though I still have no idea of the value.

I found a Wooden Nickel.  You don't see those very often anymore.  This one is from the Plane View Pumpkin Farm.  It says it is on Barrington Rd.  Does anyone have any idea where that is?

I found a Penny in a Bottle, a souvenir from Washington D.C.  Is this what they call exonumia?

Now to the cents.  There were four that I picked.  My favorite is the 2005 Cent.  It is a beautiful coin.  It looks like a proof coin, but I know it isn't.  I doubt that it is worth very much, but I still get excited with a near perfect coin.

The 1963 Cent is not a pretty coin, but it is in decent shape for something that old.

Finally, the 1973 S and 1974 S Cents.  These will help me complete or upgrade one of my collections.

A great way to beat the cold weather. Neat set of coins and more.

Thank you for your kind words on the topic of friendships! Sounds like a very successful hunt! I await the next one.

You don't strike me as one who gives in so easily. I spent about an hour writing my weekly blog only to get bounced off and having to log in again. Needless to say, I have yet to post it since after logging back on the page I created was "lost". Those darn electrons get confused easily.

Very nice blog! Yup, I finally managed to train my wife, she now gives me all her change. While traveling across country with my youngest Son, he finally reached the point where he just handed the change over without prompting. Family change training is a fine art, you just irritate them until they fess up, lol. Final question, are you brave enough to tell you daughter you raided her change? As for blogs, I write them on my computer, photos and all, open the site and paste. Easier for me.

Very nice finds! As for the value of the silver half and silver dime, it's really worth maybe a quarter over spot. Thanks for the update!

CentSearcher, Thanks for the info. Stay Safe, Mr. B

I can tell you there are many of the 1963 cents that are in perfect shape. I did the same thing to my wife's piggy bank and got caught!!I have collected for 27 years. I still buy a few rolls and go thru them. It's relaxing and enjoyable. . My wife came back from the store. Gives me the change . I saw a nice red cent. I looked it was a 1931. S cent. 866,000 made!! You never know what you will find!!

Mike, Thanks for the comment. I do the same thing, going through rolls. It is relaxing and enjoyable and it is exciting when you find something interesting. 1931 S Cent...Now that is a great find. All the best, Mr. B

Daughter's piggy bank...... Yeah you're down into it now! Great finds, nice way to spend an afternoon

I R Bama, You are right. It was a great way to spend an afternoon. Stay warm and Stay Safe, Mr. B

Golfer, Thanks for the comments. I hope you can get out for a few rounds sometime soon. All the best, Mr. B

That's too funny! Congratulations on all your great finds!

Thank you for the nice comments.

The fun is in the hunt. Yep, exonumia. Don't stop doing blogs. You need more practice is all. Thanks.

thanks for encouragement. Mr. B

Those are great finds!

Thanks and my daughter did not even know she was collecting coins.

The pumpkin farm was in South Barrington, IL. Nice little assortment, I would think both the silver dime and the clad silver half would only be worth their melt value in their condition. But the important thing is the FUN you had going through the piggy bank. Thanks for sharing your adventure.

Thanks for the info on the farm. You are pretty quick. you commented when I was just cleaning up Good job. Stay Warm, Mr. B