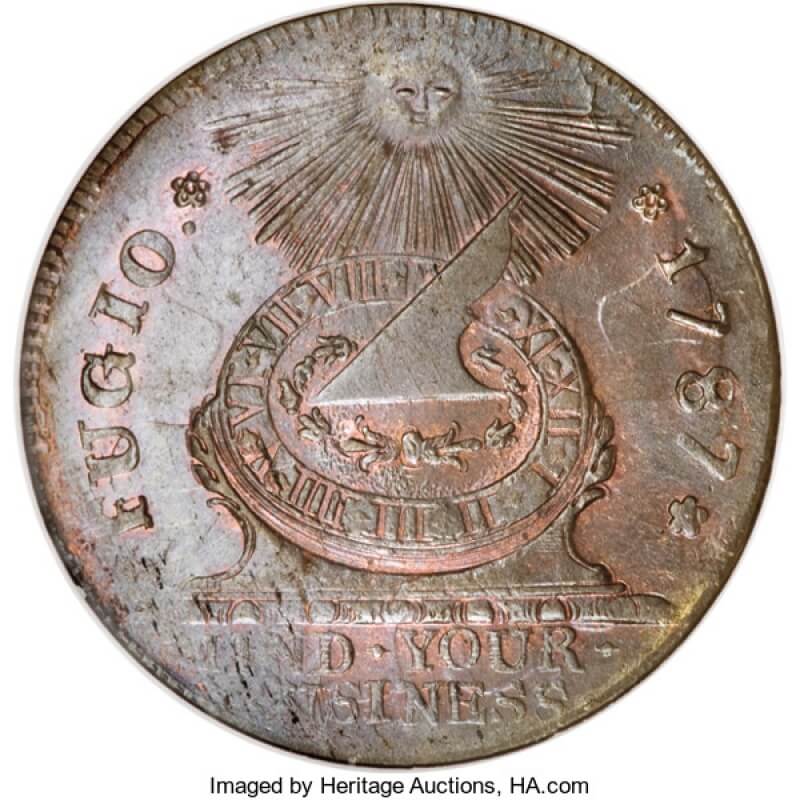 Ok, I have been meaning to right an article on some early coins and currency for a while, so here it is, broken up into two different sections:

Minted in 1787, the Fugio cent is the first official one cent coin of the United States. It is a very interesting coin, and one of my favorites. It was designed by Benjamin Franklin. Benjamin put the picture of the sun dial with the words ‘MIND YOUR BUSINESS’ to represent ‘time flies, do your work’.

This obverse design was also used for the Continental Dollar, which was made in 1776 and is also very interesting. I will be talking about them in the second part of this post.

The reverse (which reminds me of the chain cent) has 13 chain links, representing the original 13 colonies, surrounding the words ‘WE ARE ONE’. The government later changed these words to the ‘E Pluribus Unum’ we use today.

With only about 400,000 minted, the coin itself is a rarity; however, it also has at least 55 varieties from the 24 obverse dies and 33 reverse dies, with some being very scarce. There is also a very collectable restrike called the ‘New Haven Restrike’ which was made in both copper and silver. There is probably only a couple dozen silvers known to exist.

I have gone through many different auction records for the different varieties of Fugois, and the highest price I have found was a huge sum of $109,250.00 for a F15 UNITED STATES 4 Cinq. Variety.

These interesting notes were printed in denominations from a mere 1/6 of a dollar to $80.

During the revolution, Congress issued a whopping $241,552,780 in continental currency. However during the war the notes depreciated in their value heavily. This started the phrase, “not worth a continental”.

Some people seemed to think that the bills lost their value because they were not backed by physical assets; however, the truth of the matter is that there was just way too many of them.

To make their values appreciate to their original value Congress took the old bills out of circulation and printed new ones to put back into circulation, however this did not work.

By May of 1781 the Continental currency had dropped in value so much that using them as real money ceased.

Finally, by the 1790s these continental notes could be exchanged for a treasury bond of 1% of the original face value of the note.

Today the notes vary in value, starting at around $60.

Thank you for reading this long right up on these interesting coins and notes. I have owned a few myself, has anyone else? If so, do you still have them? I would love to see pictures!

Thanks again for reading,

Thanks for telling me were you got the information. Mike.

thanks for the blog. these coins have a lot more symbolism and meaning than modern coinage in my opinion and that is why they are so well liked

A Fugio Cent has been on my want list for quite some time now. Only problem is most of them were poorly struck, which makes a great specimen about the price of a new Cadillac. There is a lot going on with the obverse, as well as the reverse, which makes finding a good strike rare .But you can't beat the history behind them.

Really enjoyed this blog! Great coins! Thanks for all your research. I have a 1783 Nova Constellatio Pattern Coin that I blogged about on Dec. 09. It's kinda similar and very cool too!

Very informative blog. Thanks for sharing.

Thanks for the history. I enjoyed reading this. My mother-in-law showed me a bunch of really old coins once, but I had no idea what I was looking at. I need to ask her to show me again.

Great shots of great coins. Were did you get your information you know the bibliography. Thanks for the blog. Mike.

I searched for information on them on the internet.

2 of the most important coins in US numismatics. Lovely pics.