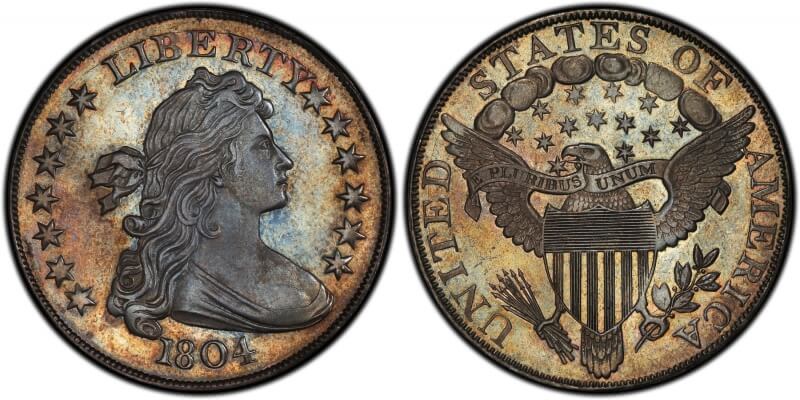 After reading the recent blog post about 1913 Liberty V Nickels, I decided I should make a post about a different ‘legendary’ coin. The first coin that came to mind was the 1804 Dollar. I was lucky enough to see both a 1913 Liberty V Nickel and an 1804 Dollar at a coin show in Vegas (as a matter of fact, my tables that I had at the show were right next to these coins).

I searched ‘1804 Draped Bust Dollar’ on Google, and quickly was overloaded with information! Here is a summary of what I have read:

Only 15 of these rare dollars are known to exist. There are three different Classes (varieties) of the 1804 Dollar, which we will get into more detail later in this post. Eight class 1 examples are known, one Class 2 example has survived, and six class 3’s are known.

Numismatists first came to know about the 1804 Dollar in 1842 when two mint employees published an article with an illustration of one of the dollars.

In 1843 a collector came into possession of one of the 1804 Dollars. Because of numismatic demand, mint officials secretly minted several examples of the dollar. These dollars were minted with different edge lettering as the ones minted for special mint sets and collector trades, even though, later in the 1804 Dollars story, more were minted with the original edge lettering. The classes are as follows:

Class 3: 1804 Dollars struck with correct lettering later in the story.

Edmund Roberts started acting as a messenger for the United States, sending messages to Asia. The goal was to negotiate trades in the area.

Items were given to Edmund to give as gifts to the people of which he worked with as a messenger.

Mr. Roberts wrote the following letter to the United States Department of States, asking what he should give the King of Siam and the Sultan of Muscat (two people of which he sent messages to):

I am rather at a loss to know what articles will be most acceptable to the Sultan, but I suppose a complete set of new gold & silver & copper coins of the U.S. neatly arranged in a morocco case & then to have an outward covering would be proper to send not only to the sultan, but to other Asiatics…

Later a letter with John Forsyth’s approval of the sets, was sent to the Mint Director Samual Moore. The letter read:

The President has directed that a complete set of the coins of the United States be sent to the King of Siam, and another to the Sultan of Muscat…

When the Mint started minting the coins, there arose a problem, in Forsyth’s approval, he wanted the sets to include every type of coin then in use, but the US Dollar hadn’t been minted since 1804, (when the coins bore the year 1803). So, two proof sets were minted, and were given to Edmund before he left on the USS Peacock.

Roberts died before he could deliver both sets, so the commodore of the diplomatic fleet wrote a letter to the State Department that he had:

The proof set minted specially for Cochin-China were probably part of the package in which was shipped back to the United States.

William Dubois, (Mint Assayer at the time), tried to bring all examples of the 1804 Dollar into private hands, as Dubois said, five 1804 dollars were known to be privately owned. Four of these were recovered. He also said that three of these four were destroyed in his presence. The fourth example was added to the Mint’s Coin Cabinet. This coin, which is the only known class 2 example, was struck over an 1857 Swiss Shooting Thaler.

The fifth example has not been accounted for. It is thought that this coin’s edge was lettered after it was minted, in an attempt to be passed off as an original.

1804 Dollars with added edge lettering are known as class 3 dollars.

The obverse die, that was used to strike 1804 Dollars of the class 2 and 3 types was put into safe keeping, whereas the reverse die was destroyed.

Later, the obverse die was defaced.

All through the 1804 Dollars lives, they have demanded much a premium. For example, in 1885 examples would sell for around $1,000, by the middle of the twentieth century, they were selling for around $30,000, and in 1999 a Class 1 example sold for $4.14 Million! Because of these high selling prices, the 1804 Dollar is a highly counterfeited coin.

I hope you learned something from my longest blog post I have ever written!

Really great blog! I enjoyed reading it! Thanks!

The King of American coins! Thanks for the blog & reminding us of this special coin. So many rarities are being sold, let's not forget the most famous one of all.

And the coin is quite beautiful!!! The King of Siam" set was "found" in the hands of decedents of Anna, the tutor of the King's children. In 1950 it was put up for auction. At that time it was a shock and surprise to everyone. thanks for the blog.

Very well done. I enjoyed reading it. No blog is ever to short or long. You have done your homework. You have the history of the coin a great picture all adds up to a very good blog. Thank you for the information and your work. Mike.