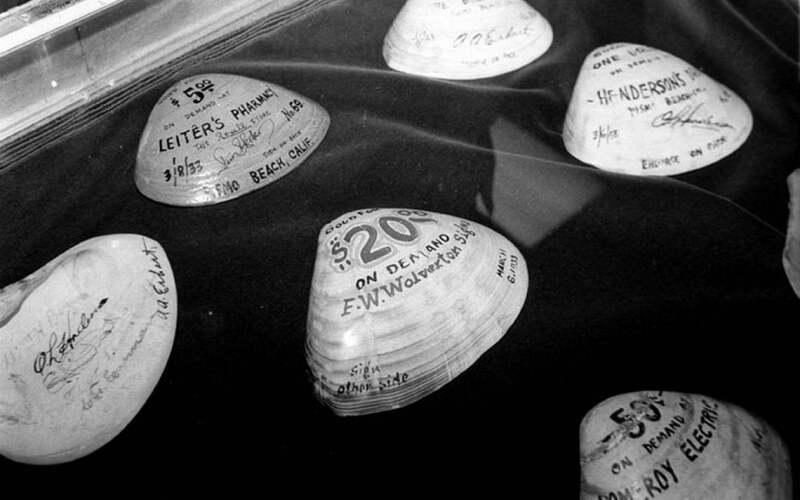 During the great depression of the 1930s most Americans had lost confidence in the US banking system as many saw their savings vanish when dozens of banks closed as a result of the wall street crash. When President Franklin Roosevelt was sworn into office on March 4th of 1933 he promised to rebuild the nations confidence in their banking system. Two days later on March 6th he ordered all banks to close for 3 days to allow the newly elected congress time to act. However, closures would continue on for longer than the allotted 3 days, and it would not be until a week later that American citizens were able access banking services once again.

During this time the need for banking services would lead to the creation several Local Script Currencies that allowed for cities across the US to continue on with daily business. Each one was unique to the city’s culture and the needs of the locals. One such short-lived currency was the Pismo Clam money that arose in the local hotels and tourist shops of Pismo Beach, California.

Clams were already an icon of Pismo Beach which prided itself as the “Clam Capital of the World”, so it was not surprising that local businesses would turn to clams as a temporary medium of exchange while unable to acquire small change from their local banks. At least eleven local businesses started to issue clams bearing their store’s name and signature along with a monetary value written on the outside of the clam shell. Additionally, some stores began adding common phrases such as “In God we Trust” to their clams. Denominations would vary from 25 cents to 20 dollars depending on the store, and would be reflected by the size of the clam with larger clams holding higher denominations. The types of services you could receive for Pismo’s local scrip varied greatly as many local businesses began issuing clams. Depending on your taste you could stop by any number of stores including Henderson’s Drug Store, Hi-Way Cigar Store, Leiter’s Rexall Pharmacy and Restwell Cabin.

When the banks were finally reopened on March 13th many of the local business continued to honor the clam scrip they had issued. Although the clams would eventually fade out of use, many would be saved by both local businesses as well as the city of Pismo as icons of the city’s culture and economy. Today you can still find Pismo Clam money if you visit Pismo’s city hall, or stop by one of the historical shops that line Pismo’s streets.

I love stuff like this. Only problem was I bet it smelled bad in your pocket.

I've been to Pismo but never saw any of those. Great blog! Thank you!

Thanks for the great blog. It is nice to learn the history of that time period.

What a great blog and photo's! This is a real history lesson. Thanks for sharing this information as I didn't know about Pismo Clam money!

Great blog. I believe I have seen some of these in my travels. Thanks for taking the time to write.

Goes to show you what can happen when people loose faith in an economy. It struck all over the world not just here. But we kept strong and regained our way of living. Tough times but we made it. It must of been hard. Thanks for all the information very interesting . I have read up on it. It was ugly. Great blog thanks and hope it doesn't happen again. Great shot. Mike.