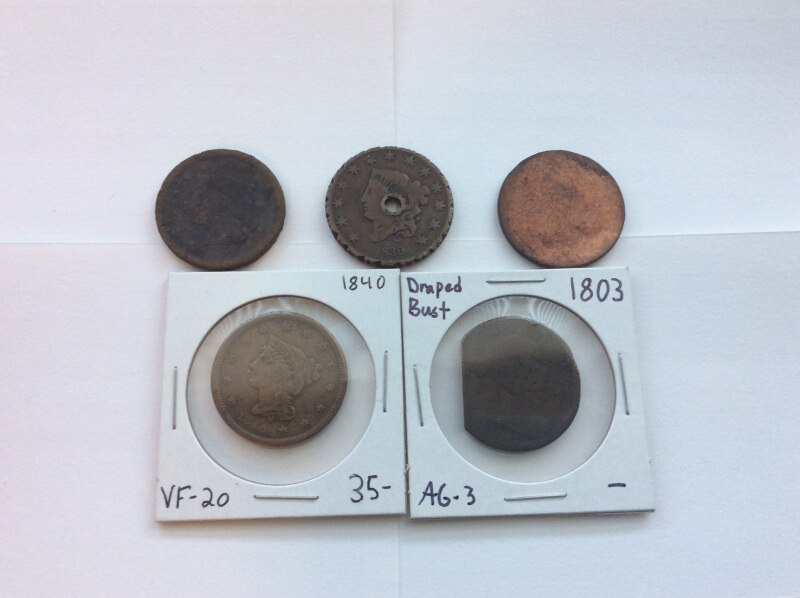 Hello, coin collectors! This is my first post, and I decided to make it on my large cent collection. I have a small large cent collection of just 5, but I'm hoping to get more soon. Sorry the picture is off-center:) In the top right corner is my 1852 braided hair large cent, on the bottom right is my 1840 braided hair large cent, on the top in the middle is my 1830 cornet head large cent, on the bottom left is my 1803 draped bust large cent, and on the top left is my 1797 draped bust large cent. My 1852 large cent is probably my favorite large cent, not for its value, but because of it's story. I was visiting my grandparents and asked them if i could go through their change jar, and they said I could. I found a lot of Mercury dimes, war nickels, and other things, but as i was reaching the end, I noticed a weird large brown coin. I pulled it out... my first large cent! My grandma said she found it on the side of the road and picked it up. They let me keep it for free! My 1840 large cent was basically free, too. I was coin roll hunting quarters, and I found a W quarter and wanted to trade it for something better, so I traded it for my large cent! My 1830 large cent has a hole in the middle of it, because someone had made it into a washer (washers used to cost 3 cents each, or you could make your own for one cent, so a lot of people did). It was at my local coin store and priced at only $1, but the guy gave it to me for free 😃 . My 1803 large cent I got in an ebay auction, 1/4 of it is clipped off. My 1797 large cent was free at a coin show, and it had no date, but I did some dating methods and it worked! Thanks for reading!