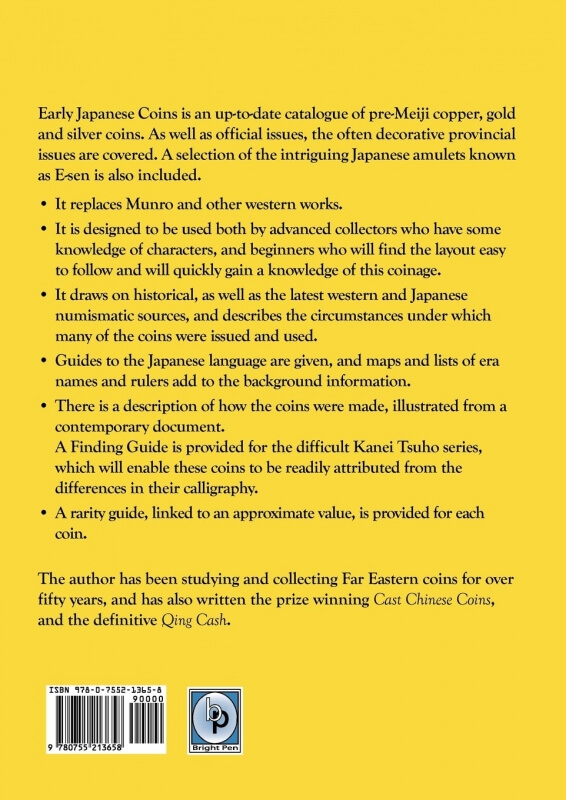 03 May 2015
Early Japanese Coins is the latest catalog of pre-Meiji copper, gold and silver coins.  As  well as official issues, the often decorative provincial issues are covered. A selection of the intriguing Japanese amulets known as E-sen is also included. It replaces Munro and other western works. It is designed to be used both by advanced collectors who have some knowledge of characters, and beginners who will find the layout easy to follow and will quickly gain a knowledge of this coinage. It draws on historical, as well as the latest western and Japanese numismatic sources, and describes the circumstances under which many of the coins were issued and used. Guides to the Japanese language are given, and maps and lists of era names and rulers add to the background information. There is a description of how the coins were made, illustrated from a contemporary document. What I found particularly valuable was a guide to the varieties  found in the Tempo Tsuho series of oval coins. These are readily available at reasonable prices with rare varieties for those who become specialists. A rarity guide, linked to an approximate value, is provided for each coin. The author has been studying and collecting Far Eastern coins for over fifty years, and has also written the prize winning Cast Chinese Coins, and the definitive Qing Cash, books that I also have and will review here. Even if you can't collect them the book will provide an excellent education on this important field.
The book is large format paper with 137 illustrated pages, published by Bright Pen. The books is also available as an e-book download from  www.authorsonline.co.uk
About the Tempo Tsuho illustrated:
Tempo Tsuho - 100 Mon. No date, but these were issued between 1835 and 1870, which transcends the typical dates for inflationary period issues of China and Korea. All these Asian states produced inflationary Cash, Mun, and Mon (& others) in response to economic conditions. China produced them in response to the Tai P'ing Rebellion as a way to help pay for the war against these rebels. The 100 Mon coin was the official coin of the Tokugawa Shogunate.
Obverse, vertical inscription: Ten-Ho (Tempo) Tsu-Ho. Reverse: To Hyaku (value 100). Edge is smooth, often with file marks and two validation marks. Cast at Edo (Tokyo), Osaka and some provincial mints (Yamaguchi, this one with 'short feet' on the bottom obverse character, "ho"). Large center hole. Varieties exist and can be worth a considerable premium to the specialist collector.
This is a nice example that has minor corrosion and has a nice edge stamps (2, look like a leaf, Yamaguchi mint) on the edge. These are common, but like most of the inflationary issues, were produced privately as counterfeits, often of degraded quality. Many are encountered with a rougher sand mold background, these are illegal contemporary counterfeits which circulated widely, I assume these types were also missing the edge mint counterstamp, example shown here is an official issue.
Bronze, Hartill # 5.9; KM C#7, 32 x 49 mm, 2.5 mm thick and mass is 21.82 g.

Thanks for the information. I wouldn't know about it . I don't collect world money.

Thanks for another lesson in the history of numismatics!

Thanks Juno. That's what I love about numismatics. One can branch off the study of the physical coins to the art and politics of the time. The history of how the coins were made. Thanks!

Thanks for the info! Sounds like a good book!