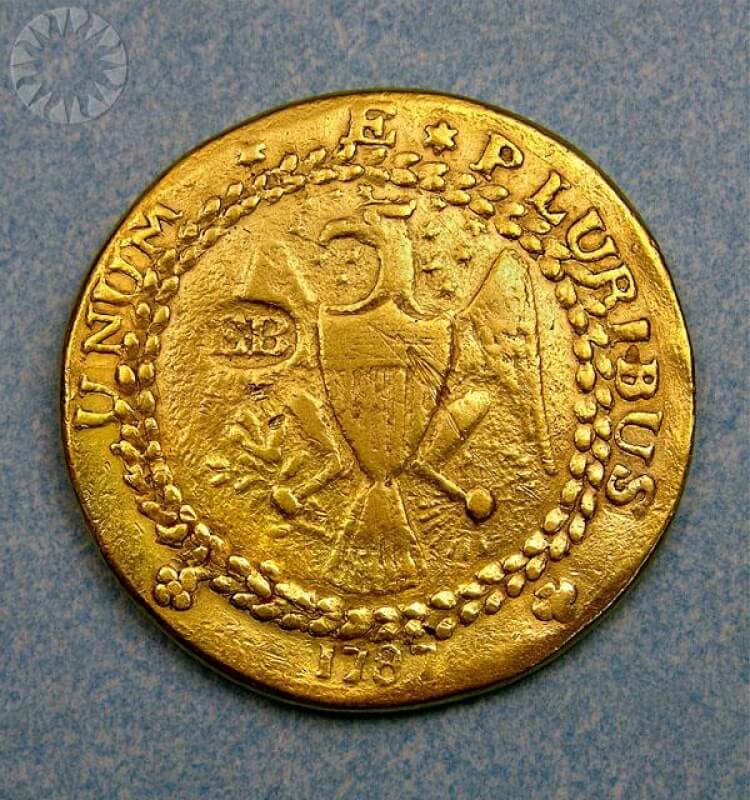 In 1787, Ephraim Brasher, a goldsmith and silversmith, submitted a petition to the State of New York to mint copper coins. The petition was denied when New York decided not to get into the business of minting copper coinage. Brasher was already quite highly regarded for his skills, and his hallmark (which he not only stamped on his own coins but also on other coinage sent to him for assay [proofing]) was highly significant in early America. Brasher struck various coppers, in addition to a small quantity of gold coins, over the next few years.

On January 12, 2005 Heritage Auction Galleries old all three varieties of Brasher Doubloons as part of their Florida United Numismatists U.S. Coin Auction, Platinum Night Session. The coins realized $2,415,000 for the New York Style EB Punch on Wing NGC AU55, $2,990,000 for the unique New York Style EB Punch on Breast NGC XF45 and $690,000 for the rare but less iconic Lima Style Doubloon. The unique Brasher Doubloon, the first gold coin made for the young United States, was sold December 2011 by nationally known rare coin dealer, Steven L. Contursi of Laguna Beach, California, to Certified Acceptance Corporation (CAC) of Far Hills, New Jersey. An undisclosed Wall Street investment firm subsequently has purchased it from Blanchard and Company of New Orleans, Louisiana for a record price of nearly $7.4 million, the most money ever paid for the historic rare coin.

The coin was the subject of nefarious goings on in Raymond Chandler's Philip Marlowe mystery The High Window. It is also mentioned in Lawrence Block's Bernie Rhodenbarr mystery The Burglar Who Studied Spinoza and John Bellairs's The Mansion in the Mist.

The last information about The Brasher That I have found.

Ephraim Brasher was a talented goldsmith who petitioned New York State to mint a new set of coins in copper in 1787. But the state legislature didn’t want Brasher’s work, and didn’t want copper coins. Brasher ignored the state’s decision and went ahead minting coins anyway, mostly in bronze—but a precious few in 22-carat gold. One of these was a doubloon bought by a Wall Street investment firm for $7.4 million.

Real history. Hopefully the history being reported is close to the real story. Can one ever know for sure 200+ years later?

How cool to be George Washington's neighbor AND mint gold coins! Talk about a dream life.

Great info & back story Manole - Thank you for the pic

Very interesting blog. It's quite a beauty. Thanks

Yes a very interesting story thanks.

This is the world´s 3rd most expensive coin.

Various theories have attempted to explain the purpose of the various Brasher Doubloons. Don Taxay suggested that they were struck from the dies intended for copper coinage, but that the gold version were intended as bribes for the New York State legislators who would favor Brasher and Bailey with a contract for the copper coinage. Taxay's comments probably came from Robert A. Vlack, in Early American Coins: "There is every reason to believe he [Brasher] contemplated expanding his profession to that of coinage as he filed a petition on February 11, 1787, with John Bailey, for the privilege of coining copper. It is reasonable to assume then, that these original dies were cut to serve more for a copper coinage for New York, than for a gold issue. This is supported by the fact that the dies were of the same size as that for the copper state coinage."

It is very beautiful coin. Thanks for sharing the information on it.

Now that is a beautiful sight, 1st thing in the morning! Thanks for this! BTW wasn't Brasher the neighbor of George Washington for a while?

Breen discovered that Brasher's address in 1789-1790 was listed as number five Cherry Street in New York City, which was next door to George Washington's residence. It has been reported that in Washington's now lost household accounts there was an entry under April 17, 1790 stating Washington purchased four silver skewers from Brasher for £8 8s6d in New York currency. Brasher had a substantial reputation as an assayer. In November of 1792 with the assistance of David Ott he assayed several varieties if gold coins for the new federal government. Thereafter Brasher assisted assaying gold for the U.S. Mint.