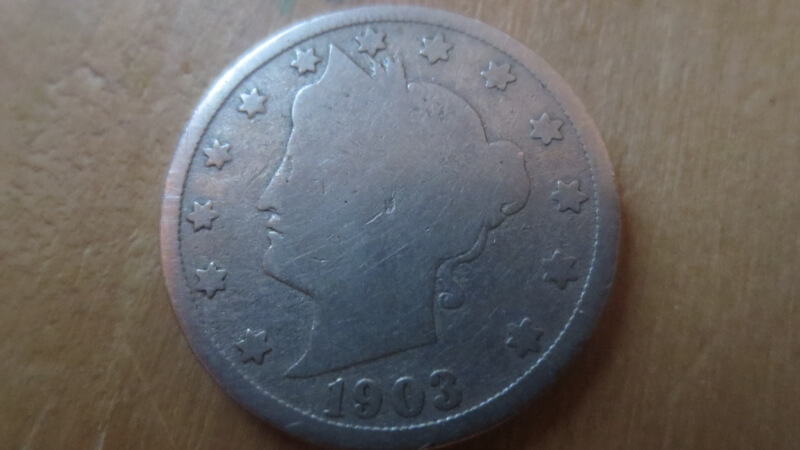 When I was relatively new to coin collecting, I came up with the idea of roll hunting, and started with $20 in pennies. I found 10 wheat cents and a few canadians, which inspired me to do more roll hunting.
I have no idea of how it happened, but in about one month I had $100 for roll hunting. I finally got my first box of nickels, in which I found one Buffalo Nickel and 2 1943-P War Nickels, including my best ever War Nickel. I rolled all 2000 coins up again to bring them to the bank in dimes. This time I found a clad 1968 Canadian Dime and a VF-20 1948 Roosevelt Dime. I was very happy, and got another $100 in dimes, but this time I did not even turn up a canadian dime.
I decided to stick with nickels, because there was Silver, Buffalo's, Rare Dates, San Francisco's, and maybe even a V Nickel somewhere in the bank.
I finally found that nickel: An AG-3+ 1903 Liberty Head Nickel; I also found a buffalo nickel and a 1939: A Trifecta!!! I wish I had found a War Nickel, because I would've had the Grand Slam!!! I have searched about $200 in pennies and about $4000 in nickels: 100,000 coins!!! I have found 20 war nickels, 10 buffalo's, 1 V Nickel, 400 wheat cents, and a few more coins.
I have heard of amazing finds being found like 1880's Indian Heads, 1800's V Nickels, and Dated 1910's Buffalo Nickels!!! I haven't found anything that amazing, but I do have I really good find!
Enjoy Coin Collecting and Happy Hunting Everyone!!!

Nickels are well worth searching, as you know. Most people don't give them a second look, & probably don't know of the silver War nickels. And a Liberty nickel!

The excitement of what you might find is what drives each of us to roll hunt.

I have the set in AU and MS except one 1885. It's ever expensive and most in very bad shape. I won't put it in my book.

yep, cents and nickels are the best for crh! I haven't searched many rolls, but i hav found 1 wheat cent so far, a copper canada cent from '64, and three nickels that fill my 1939-1961 album!

I haven't searched roles for a long time but after reading this I became re inspired and got $60 in nickels from the bank. While I didn't find anything major I found alot of late 40's 50's and early 60's. The oldest one I found was a 1940.

Amazing. I wonder, has that nickel been in circulation for 112 years straight? Thats a very long time; imagine, when that coin was minted the civil war had only ended about 40 years previously!!

Interesting article on searching rolls. It is fun to simply undercover interesting coins with no real expenditure. I have had two somehwat similar pursuits. Years ago I started tossing Jefferson nickels from the 1930s and 1940s into a cigar box. I even had family members saving them for me. Today, of course, you rarely find them in circulation, but I still sometimes do and add it to my box. The other modest collecting practice that I have followed is to save Washington quarters from the 1960s. Why? Probably simply nostaglia. I have a huge box of these, all from circulation and many of which I acquired in the 1980s and 1990s. But even today I usually find three or four a month. My wife also checks for me. I can relate to your roll hunting.

I love coin roll hunting. I gave up on silver and search $25 bank boxes of cents. You never know what you are going to find! You have some nice finds now. Good luck!!

Dimes, Quarters and Halves aren't worth silver searching, but nickels are.

You have gotten some great finds!