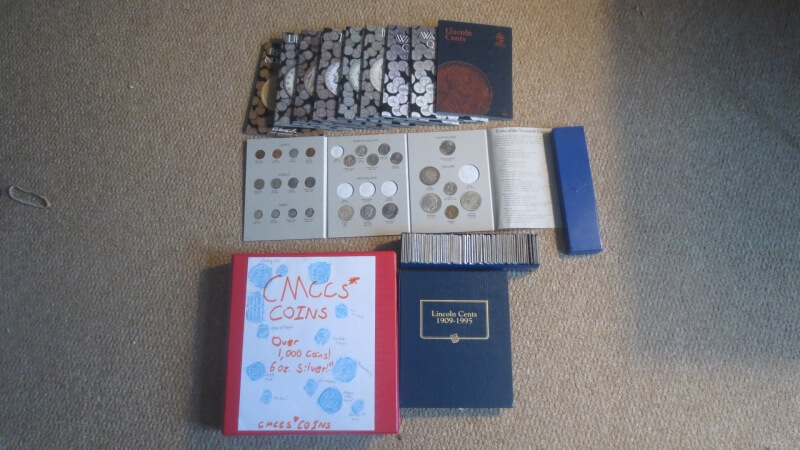 I have decided to go over my old blogs and re-post them, that way you don't have to go a million blogs back to look at them. Enjoy!

OK, so now I want to share how I started collecting coins

About a year later, we attended a flea market, I remember that there were more stands of coins and jewelry than anything else. I was very interested in the coins, but, as I was not a collector, they did not mean much to me.

Not until June of 2013, I finally took the 35 Wheat Pennies and 2 Buffalo Nickels down from the shelf. Somehow a 1961 Dime and 1942-D Nickel made their way into my collection. I looked at my tiny collection whenever I had time, and I was so happy to get a 1935 F Wheat Penny!

I have bought several lots off of eBay, and now my collection includes 5 Morgan Dollars, 2 Peace Dollars (both BU), several halves, quarters, and dimes, and folders of Nickels and Pennies. I also have several large cents, foreign coins, and $2.00 bills.

So that is how I started collecting, this June will mark three years of being a numismatist.

I'll be back if I get something new!

That is an awesome getting started story - If you are worried about re-posting - try doing an updated blog - with a link in that blog referencing the earlier blog - what do you think about that idea ?!

Nice story. I don't agree with reposting. I would l d rat h ere see new information thank you for all your work.

I love these kind of blogs!

It is always great to hear how people got started in collecting. Who helped them and how many years it has been. It seems the sooner a parent, aunt or uncle start providing their knowledge and interest in the hobby the more passion that person has going forward.