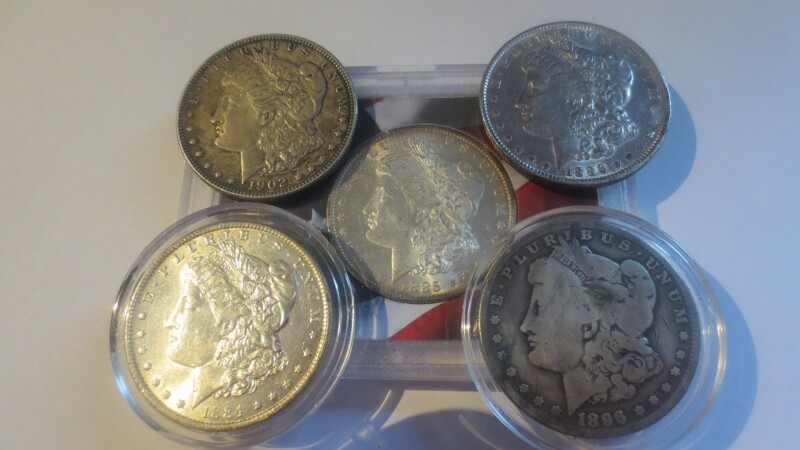 I have already had 5 morgan dollars accumulating in my collection. In one of the Numismatist magazines, it mentioned how silver dollars just continually pile up in one's collection, and I have found it to be true!

January 28th 2014: As a late birthday present, a close friend gave me a bright, shiny, glistening 1885-O Morgan. As it was my first silver dollar in my collection, I was so excited for my first silver dollar, and that is was an old Morgan, that I didn't even look at the reverse until I was asked, "Is that 'O' in the back the mintmark?" I checked, and sure enough, it was an 1885-O. I am no professional grader, but I believe it to be an AU-58.

April 7th 2015: As a Resurrection Sunday present, our grandparents sent us another package, and out popped an XF-40 1886 with interesting toning on the reverse. This is my most common, but I like the toning.

I have accumulated a few Morgan's myself over the years. They are nice big silver coins and I enjoy them. Until silver goes way up again ! Then off they go for sale !! I can dream of riches !

I know it's hard to believe but I'm not a big fan of Morgan's. There seems t o be so many of these there isn't a company or dealer that don't sell them. Maybe if there we fewer I would.

Wonderful collection! Morgans are my favorite!

wow! I only have one

Just wait, they will begin to pile up sooner or later. I never bought one or even had let anyone know that I wanted one, and now I have seven Morgans and one Peace Dollar.

Nice collection you got.

A fun set to complete.

(Anyway, I would like four complete, or nearly complete nickel sets!)

But an expensive one! I don't aim to try to get every date for years, maybe decades!

Nice! check to some VAMs.