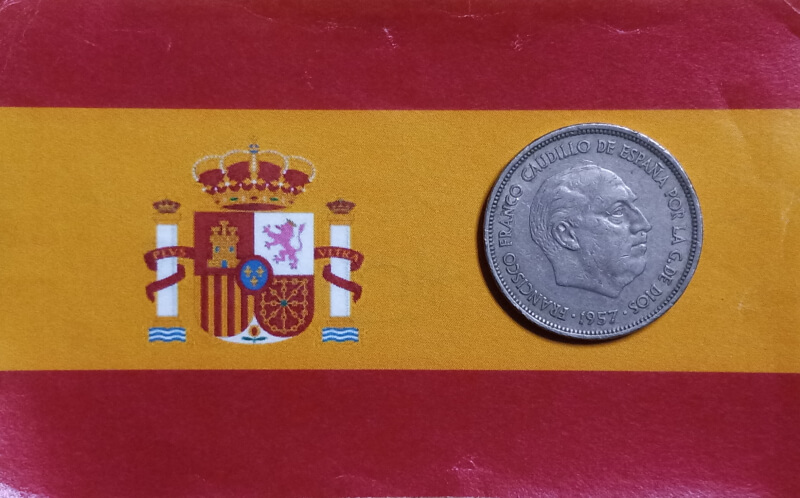 General Francisco Franco (1892-1975) was acclaimed leader of the National Republic of Spain on October 1st., 1936 and ran the Country with an iron fist until his death on November 20, 1975. His likeness is depicted on this 25 Pesetas coin.

Originally authorized by the ruler's mandate in 1957 all coins kept the year of issue hidden inside a *star* symbol near the bottom left close to the 1957 year. Thus the one shown here belongs to 1970's circulation. The renewed state emblem is also included on the other coin's side. Artistic elements removed the monarchic features of the coinage giving a new National Party infussion to the official currency.

An interesting coin to keep and share giving an aspect of last century's Spanish development in the registered currencies of the World. Enjoy!

That eagle area certainly looks Art Deco I concur with you.

The eagle design on this coin reminds me of some of the old German coinage designs.

It seems like late German issue, in a way. Thanks.

A really different coin with lots of history.

Thanks. I enjoy searching this kind of coins.

And you were right I searched and searched you were right. They did make some Kennedy's with 1964 date in 1965!! I bow to bow to greatness. to you were right!!I apologize. See I learned.!! Thanks my friend. This is what we should be doing. !!

Cool comment, thanks. I know it has to with the 1964 Kennedy Half $. Wonderful. 'Like your guidance. From all we will learn. Thanks.

So you found another way. You said you didn't care for points . I don't get it.People not here for years. Let me know if they follow you back. they will read your blogs Everyone says you want to be number one . I will be happy to give you mine. Do t you want respect for yourself. Seriously . Collector's see what your doing. They all ask why? I wish I knew. You don't have to do this.What is it going to do get you first. My friend its not worth it. I rather know AC the blogger. Not AC the point man. That's not a reputation you want. You want to be a collector like us all.I hate to see you do this to your self. Im sorry my friend. You are better than this. Following what a kid does. Because he doesn't know any thing yet. Your better than this. You a collector at the ANA. Be proud of that. We all are.

Thanks for your words and be it known my respect to you and all others. Yes indeed, we shall keep on learning with the art and passion of numismatics as a discipline and magnificent hobby. That's why we shall keep saying: IN God We Trust.

Wow the member who has 50+ years of active service found that! I didn't know that!

The design is cool!