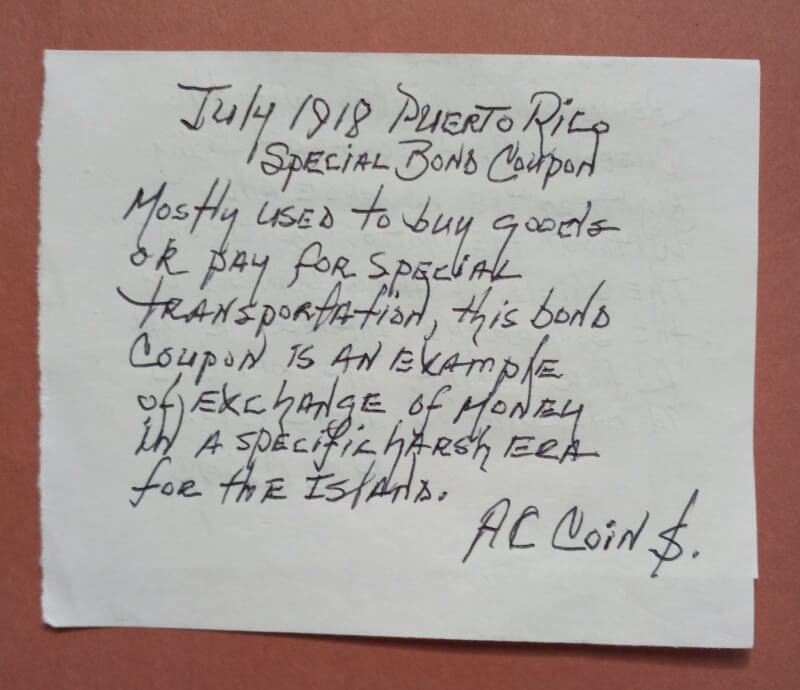 Signed by the Mayor and the City Secreary

Pegged to Ceballos and Company of New York City

When the island of Puerto Rico became a United States of America territory in 1898, a new phase of decisions on commercial investment was put in place. Specific financial demands of cities and smaller towns in the island required commitment of resources from US based companies, Puerto Rican cities' administrations and people,  citizens who believed they should take part in the growth of the local economy regardless of their limitations.

An item of monetary value, the cash bond coupon shown here was issued by the City of Arecibo, Puerto Rico in July 1918 for $30 and pegged or guaranteed by a then New York City, NY based "Ceballos and Company". Item or coupon #68 was cashed out, the center hole perforation claims the buyer eventually redeemed it. Its value is not only historical, but social and moral since it was launched to move the investments and acquisitions of goods around the city of issuance and the guarantors good faith. It was also used as a buying coupon or ticket worth its face printed value.

Its small size (1" x 2 1/4") makes it uniquely collectable and represents an effort of financial survival around the harsh times of World War I.

Larger Puerto Rico-USA stock bonds and other financial instruments have reached our National Archives as permanent items of value since the island became part of the US territories.

**Even though the Ceballos & Company of New York no longer exists,  my research did find there is a trucking enterprise carrying that last family name and several prominent professionals still living in New York City. It is possible, the trucking company now serving interstate New York and other parts of the Nation, is owned by a distant or close relative of the original "Ceballos Co." founder. Trying to contact them have provee unsuccessfully frustrating. Thanks for reading my blog and appreciate your comments.

Wow, totally cool there, AC! I have never seen these bond coupons before or knew of them. Thanks for teaching me something new.

Thanks much Bama!! Most of my information was gathered and organized from my membership notes of the Puerto Rico Numismatic Society. Within the President McKinley term, the island faced a transformation mostly tied to the economy and its recovery from the Hispanic American War. Afterwards all US administrations rebuilt what was torn by the Spaniards and brought our society into a better path for the future. Certificates, bonds and special cash-out coupons were issued by the American military-political overseers since late 1898. Our banking systems were born from such operations and decisions.

Different. I see a lot of these bonds and the like at some auctions. Thanks.

Bibliography p!ease. I don't know about stock is this stock or a cash coupon ? Did they own part of the company? It says on it 30.00 dollars in Gold. Is that what they received

It is a summary of my personal research on this item. It is a bond coupon, at its validated time it was worth $30 in gold as it states printed. Thanks for your remarks.