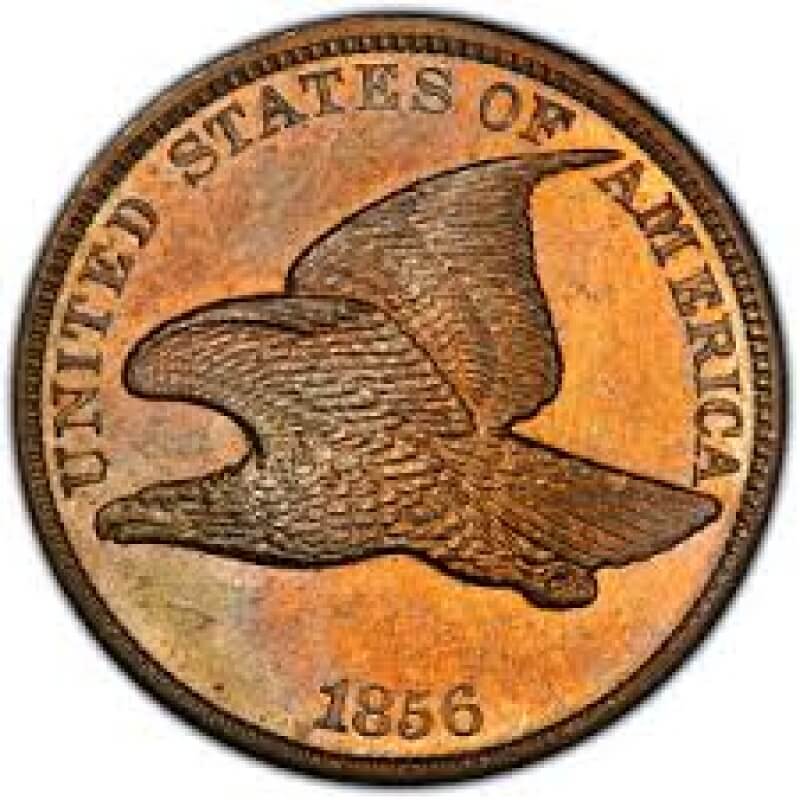 05 Oct 2015
Another of my favorite coins is the Flying Eagle Cent.  The Flying Eagle is one of the few coins that have very few dates of mintage (1856-58.)  It was based off of the German Feuchtwanger Cent.  The Flying Eagle was designed by James b. Longacre.  The 1856 cent was largely used as a pattern coin.  It is usually one of the more sought after coin with only 750 coins minted, which is one of the lowest mintage numbers I have ever seen.  The following year in 1857 the Flying Eagle Cent became available to the public, and was met with positive reception, with many people trading in the large cents.  The next year in 1858 two varieties were made, a small date and a large date.  While the 1857-58 pennies are not nearly as valuable as the 1856 the are both highly sought after by collectors and demand a fairly high premium.  The downfall of these coins was namely due to the metal composition being to hard to strike. After the 1858 coin was minted many new designs were proposed (in order to produce a better strike) but were not received well enough to be made into circulating copies; with the public seeing the design as 'too scrawny,' or something similar.  The Indian Head cent was released in 1859.  For the first few years of mintage the Indian Head cent was made of the same composition as the previous Flying Eagle cent, which as mentioned before did not strike well.  Soon after that the composition was changed to what it would remain until 1982 when the cost of copper in the cent exceeded its value and was replaced by zinc.  The Indian Head penny was not actually of a Native American, but of Liberty wearing a traditional Native American head dress.  The Indian Head Cent was minted almost exclusively in the Philadelphia Mint until 1908 and 1909 when the San Francisco mint produced relitivly low numbers of coins.  In 1909 the Indian Head Penny was minted along side the first Lincoln cent which would take it over and is still minted even today.  Both the Flying Eagle and Indian Head Pennies have high demand among collectors.  Most Indian Heads can cost around two dollars.  The Flying Eagle is usually much more expensive with good condition coins going for around twenty five dollars.  Both coins I would recommend highly for any collection and is a okay starting spot for beginners with a few exceptions.
- Peyton Smith

A fav coin. Many patterns looked good too.

I don't think that he will appreciate your comment it was four years ago he's gone.

That's a beautiful coin I always liked it. I wish they only made more of them. A good one is very expensive. I own two. Thanks for your hard work and info Mike.

I always believed this to be one of our more beautiful coins. Thanks!

Great article! Flying Eagle design is one of the best designs in history (if you ask me). They are something to behold in Mint State condition and especially those with Red luster.

I wish I could afford a red mint state one, but they are beautiful coins.