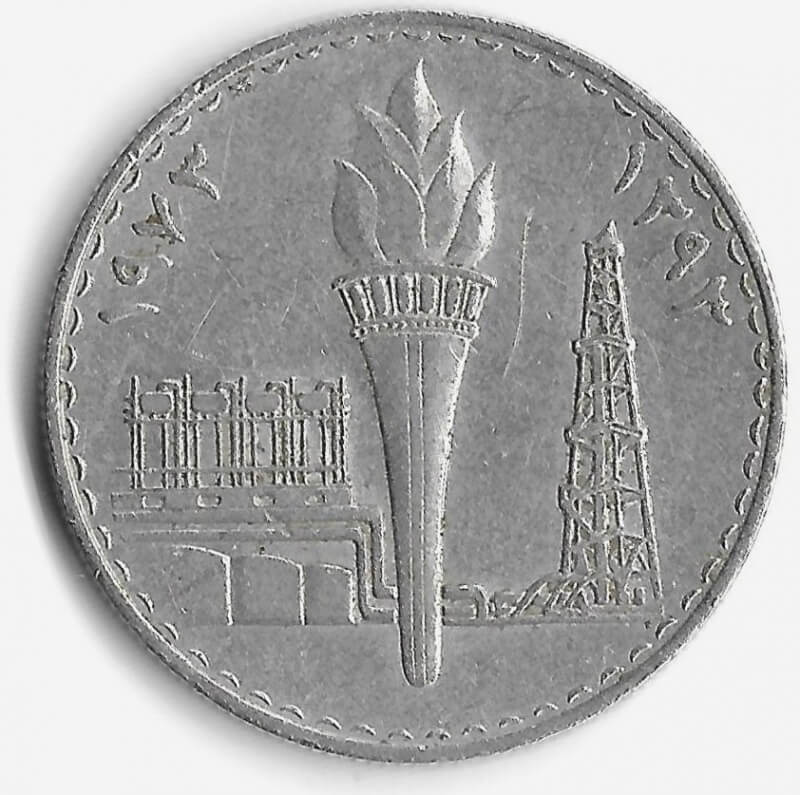 The coin wasn't big or bold, but the action was. In 1972, the Ba'athist government nationalized the oil industry in Iraq. And in 1973, it issued a circulating commemorative coin to venerate the seizure.

In a big and bold move, the government appropriated the assets and took over the operations of the Iraq Petroleum Company, a consortium owned by large Western petroleum companies. However, the coin issued to memorialize the action was neither big nor bold. The round, reeded edge 250 fils (one quarter of one dinar) nickel coin measuring 33.0 mm and weighing 15.0 g has an uninspired design. The obverse simply touts the event HAZIRAN (Arabic month of June) 1, 1972 ANNIVERSARY OF THE LIBERATION OF THE OIL FROM THE FOREIGN MONOPOLIES, and the reverse illustrates it with a torch of freedom dominating a refinery and an oil rig. 260,000 business strikes and 5,000 proofs were created.

I keep an example in my collection, but not because of its face or numismatic value. At the time of issue, the coin was worth only about 80 cents U.S., and inflation has rendered it obsolete. A nice circulated example can be bought for just a few dollars. I keep an example in my collection because my nephew brought it home for me when he returned from the Iraq War  - a big and bold action that was, in large part, the result of the action this coin commemorates.

that would be cool to have a proof one!

If you want to be my friend...set me in your account. l like your country and might have coins. . Al Raddi every time be well . Beautiful coin that Iraqi 1973 coin is great!!

I'm guessing you might be able to buy one for around $50.

Always great to hear stories about the coins and how they ended up in a collection.

What a great coin story! Sometimes it's not the coins monetary value, but what it means to you. Thanks for sharing this one ; )

That is a coin whose true value and meaning far exceeds it's nominal value. Thank You for sharing your story.

Great story. A coin doesn't have to be rare to tell a story

I will buy any coin that catches my eye. It's just a matter of it saying but me. And I usually do. Thanks for the information.!

WOW!! Now that is Big and Bold. Please thank him. I hope he is well in mind and boy. I see no reason not to collect Iraqi coins anyway. I am a fan of many foreign coins. Your reason is the best. Great blog. It is a rather humble coin to celebrate what they say. Thanks!