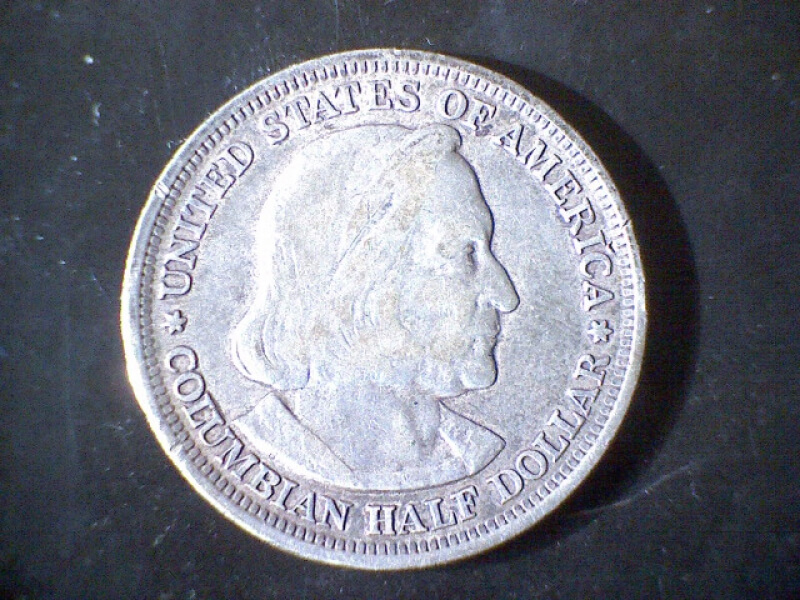 The Columbian Exposition Half Dollar

The Columbian Exposition Commemorative Half Dollar was first minted in 1892. It was minted because the construction crew that was building the exposition asked for the United States treasury to provide five million dollars. The treasury would only provide 2.5 million dollars, then a person had a brilliant idea. His idea was to ask the treasury if it could mint 5 million half dollars and then the Columbian Exposition could sell them for $1 each. Over 3 million were not sold so they got melted or put into circulation. The Remington Typewriter Company bought the first one minted for $10,000 as a public stunt.

The obverse was designed by Charles E. Barber. It depicts a bust of Columbus that faces right.

The reverse was designed by George T. Morgan. It depicts the ship "Santa Maria" sailing west. Two hemispheres appear below the Santa Maria. The two hemispheres are in between the date 1492 with 14 on one side of the hemispheres and 92 on the other end.

The Isabella Quarter was first minted in 1893 to commemorate Isabella, Queen of Spain, who helped Columbus. She helped Columbus with financing the travel of his voyages.

The quarter was also made to raise funds for the Board of Lady Manager's projects at the Columbian Exposition. The maximum number authorized was 40,000 coins and they sold for $1 each. 16,000 coins were returned to the mint to be melted. It was the very first US coin that depicted a real woman. This was also the first US coin that had a foreign ruler on it. The obverse was designed by Charles E. Barber. It depicts a bust of Queen Isabella of Spain. The date is located in the field to the right behind Queen Isabella's head. The reverse was designed by George T. Morgan. It depicts a kneeling woman holding a staff in her hand.

Great history lesson, excellent research! I actually have several of the 1/2 dollars.

Nice information! Thanks for the blog! ; )

The photo makes the blog! Thanks for putting it up! ; )

Nice blog on an historic event. I wish I had some of those coins. Well done with a nice bibliography. This blog cries for photos. Consider it if you can get some up. Thanks.

I figured it out and got an image of the obverse and reverse of my Columbian Exposition half-dollar. It is the same coin but the lighting was different because I took the pictures at different times. Lighting can make a big difference! I don't have the Isabella Quarter, but I hope to have it one day.

The medals they made were great! They had a few. I thought I had one but it was from another one. Good research and I enjoyed it very much thanks for taking the time to educate us!