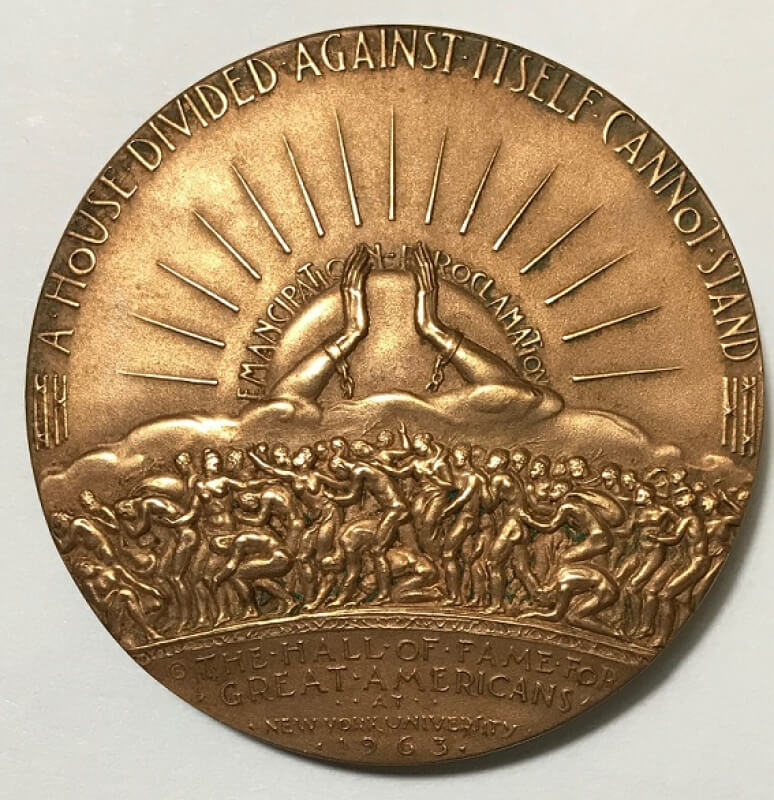 Recto depicts a right-facing bearded Lincoln with “LINCOLN” wrapped around upper rim, “1089/ 1865” to right of profile. “With malice toward none with charity for all” al left and right of neck and facsimile signature beneath. “Name of engraver (Anthony De Francisci) appears miniscule just below image.

Busy verso shows a crowd of just-freed nude slaves left to right across the center, some kneeling and others with arms upraised, with a large rising sun in background and a large pair of arms with broken chains. Around the upper portion of rim it reads: “A house Divided Against Itself Cannot Stand”, while below the crowd of slaves it reads “The Hall of Fame for/ Great Americans/ At/ New York University/ 1963”

Really beautiful Medal! Thanks for sharing it with us! ; )

Beautiful medal. Didn't know De Francisci made this. Nice. Thanks.

Quite a nice piece you have there , Many. Thank you for sharing this with us.

He has done some wonderful medals. Just like this. You have a real collectors she four beauty and class work. It must be nice to sit around and look at these cherish them. I also love the detail on his face remarkable thanks for sharing your wonderful set i do appreciate them. Mike

I'm a Lincoln buff so I enjoyed this. Haven't seen this medal. By the designer of the Peace $1. What a beautiful item.

I really like this medal. The symbolism is pretty fantastic. It's a Lincoln piece so you can hardly go wrong.