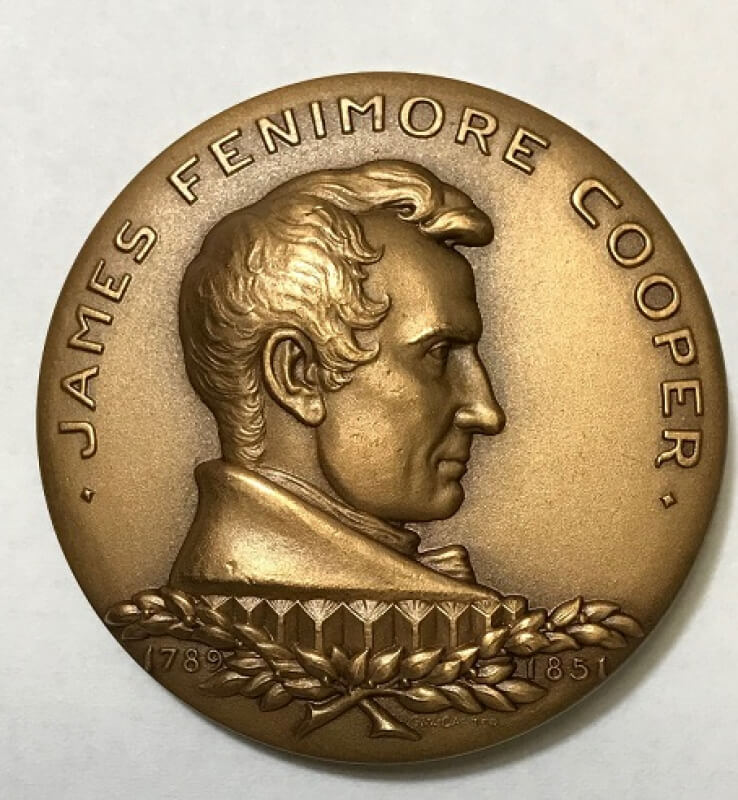 In colonial times and through the revolutionary period, American writers and artists copied the styles and subjects of Europe's masters. But in the decades after independence, they began to embrace their homeland as their subjects.

James Fenimore Cooper was the first writer to portray life on the frontier and probe the tensions between whites ans Native Americans in his classic series of "Leather-stocking novels, launched in 1823.

The Medal was designed by Granville W. Carter for the New York University Hall of Fame in 1963. The sculptor twice earning the Lindsey Morris Memorial Prize of the National Sculpture Society for outstanding medallic art.

I invite you to visit the collection of Medals dedicated to writers of the United States in the section of "collections" in my blog.

This is a beautiful medal! Enjoyed the blog! Thanks ; )

A beautiful medal. I'm off to check your collection. Thanks.

That medal definitely deserved that award. The obverse is my favorite, the overall color of this medal is pleasing, and oustanding work went into this. A lon ghistory behind as well. Can not wait to see your other blogs.

That is one of the nicest medals I have seen. The history I mile to you must have a great collection. I enjoy your blogs great work Mike.

Beautiful medal. As a writer, I enjoyed this blog.

A beautiful medal and a fantastic subject. His Last Of The Mohicans, is an absolute classic of the early American frontier when that frontier did not extend much beyond the Appalachia s. Thank you for shining a light on this important American, I will definitely check your Collection.