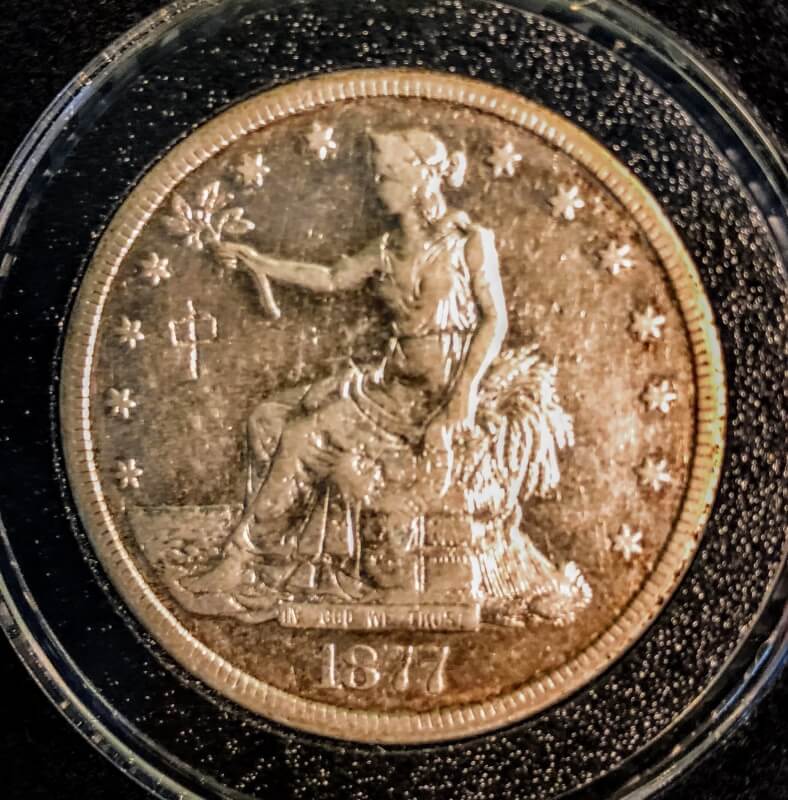 20 Oct 2018
Chop marked US Trade Dollars have always fascinated me. Chop marks are primarily Chinese characters stamped onto coins by merchants to attest to the authenticity and value of a coin, and show up on mostly large silver coins of several countries whose coins were accepted in Far East trade. Trade Dollars circulated readily in the Far East in the 18th century, and are often seen so heavily chopped that a coin's design is essentially obliterated. While some might consider them damaged, they represent to me a fascinating aspect of world trade and commerce during centuries gone by.
Chop marks were unique to specific merchants. I have tried to research some of the chops on this 1877S Trade Dollar, with very little success so far (I haven't given up!). These aren't great pictures, but if anyone has any ideas regarding the markings on this coin, I'd love to hear them!

Trade dollars are my favorite design on a silver coin. Chop marks can really lower the price sometimes.

I love Trade Dollars with or without chop marks. Great blog! Thanks for the information! ; )

I have, I think, 15 chopmarked coins including a U.S. Trade Dollar, a Great Britain Trade Dollar, a Straits Settlement Trade Dollar, a Japanese Trade Dollar, and a French Piastre de Commerce. They are indeed fascinating coins and sometimes a real bargain as many think of them as mutilated rather than historic relics of the 18th, 19th, and even early 20th century China trade.

I have always been fascinated by Trade Dollars and their chop marks. Most people either love the marks or hate them. An index book of all the different marks would be a great idea. Thanks

Chop marks help tell the story of a particular coin.

I like them I own a hoard of one. I couldn't find anyone who were selling them there prices didn't like me wen I did find them. I saw somehow marks but all in MS condition. So i did by the one and looked for more but at the time i was involved in set there still around so I can always go back . Thanks for the blog and the shots. My one was used alot but still has that silver luster. They also stamped the name of there store in the coin for more bussiness. Thanks. Mike

Chop marked Trade $1 went out & did the job they were made to do. Historical

Chop-marks on trade dollars very common, I have seen plenty of them with this on it. I wonder what would happen if someone put a tracker in some magic coins, and let it circulate through the country to see how far it went.

There is a web site called "where's George" that you can track where a dollar bill is and has been. Kind of fun.

Yep... probably more common with than without, if they’ve seen circulation. They basically did not circulate in the US. It is fascinating to just imagine where a coin like this has been, not to mention how it ended up back in California!

I don't mind chop marks either.