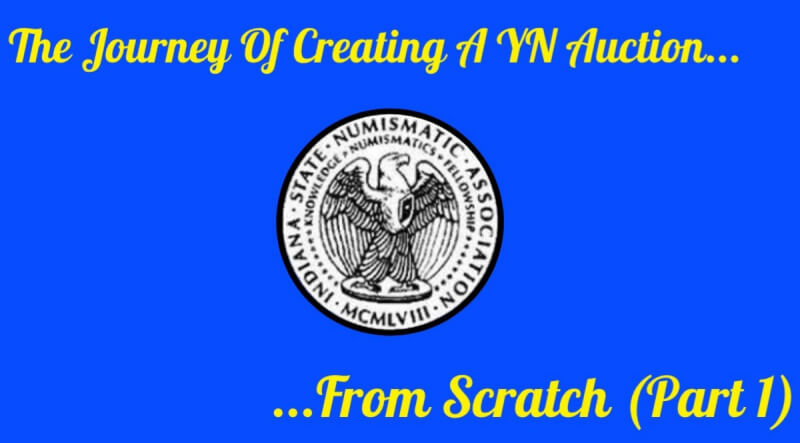 The Indiana State Numismatic Association always has an annual state show to promote the hobby. Little did I know one day I’d help remake it.

The Indiana State Numismatic Association (ISNA) always has an annual state show to promote the hobby. During the show on Saturday they always have a YN auction for the kids to learn about coins and earn them with YN dollars. Well in 2016 I went to this auction for the first time and I had a blast. I got a 2017 Red Book (which was the newest one at that time), I earned several coins and most importantly learned more about the hobby while having a great time. So why am I telling you about this? The next year came around and they didn’t have the auction…


Why Didn't The Auction Take Place?

Why didn’t they have the auction? Well for starters the ISNA was experiencing management turnover. Also the auctioneer who had been doing the auction for decades decided to step down due to health issues. This led to two problems. The first was that the new management was (rightfully) focusing their efforts on the main show. The side effect of this was that the YN auction could not be done. The second problem was that there was nobody to run the operation. Nobody to do it, then it can’t be done, right? This meant that the 2017 ISNA YN Auction would not happen. But if the auction wasn’t done in 2017, what about 2018, 2019 and beyond? That’s where my Dad and I stepped in.

With the new management of the ISNA being our friends at the Indianapolis Coin Club, it was pretty easy to volunteer. They understood the importance of cultivating the next generation of numismatists so the endeavor was set. My Dad and I were going to have to find a way to make a YN auction from scratch. The opportunity to do that was unique, and impossible to pass up.

Luckily I know a thing or two about YN auctions thanks to the ANA having one, and also my experience from the ISNA’s YN Auction in 2016. Mixing the two into a perfect blend was our goal. We had a meeting to discuss ideas, goals, ways to obtain the coins and Red Books to give to the kids. Our goals were discussed. We didn’t want a kid to win a Mercury Dime or a Morgan Dollar and then toss it to the side as if it were nothing. We wanted kids to understand the true value of what they were holding in their hand. We wanted them to understand that the coins they won were just the beginning of the great collection they could have one day. With those goals in mind, we had to create a staff of volunteers to help carry out our vision. And my Dad knew the right people to do just that.

Thanks again. If you watch the auction on this site you will see these kids know what they want. And they bid for it. They use a budget .They know the coins from the catalog. So I don't think they will be throwing any away.

Thank you for caring, and helping the next generation understand this hobby.

You did a great job! Good luck with the auction! Awaiting part 2!

Outstanding!! Thank you for volunteering your time. I will be looking for Part 2 next week.

Way to step up. If the hobby had more people like you and your dad, we would have no problems with this hobby living on. The ANA is a prime example to make it work. I look forward to part two. Thanks.

It's about the kids they need an fair chance . The deserve the right as much as the next kid. And it takes a lot of work and I have watched them. The ANA does a great job for all the kids all of them.

YN auctions take a lot of organization. Been there done that. It is important to try to keep the activity going. Good luck in the future.

Looking forward to part 2. Prayers and blessings for this to succeed.